1. My friend's daughter from the South of France should stay in Brussels for her studies at University for 6 months. The University didn't have the classes she wanted to attend, there were far too many other students. On top it was January cold and rainy and she was there all alone. I couldn't help her I had the flew. So after 2 weeks she left her room in Brussels at a slapping pace and returned home. She wanted to come back later and pick up what she had left behind in her rented room. Finally I did it and drove to the landlord's house in a little city nearby from where I live.

2. The little town is rather cute and I thought I could take some pictures of the center when I come back, but of course it started to rain and I had to drive home 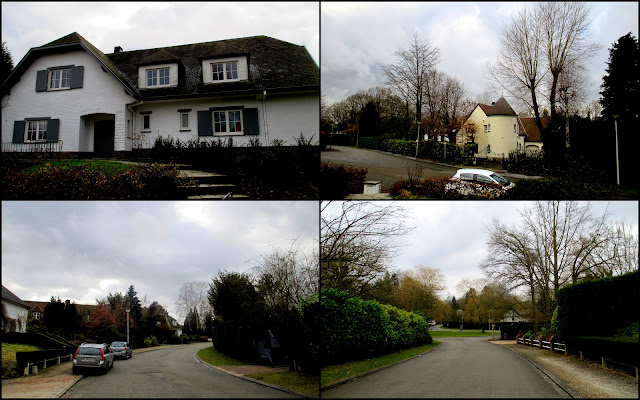 The street was outside of town and the area looked rather nice. 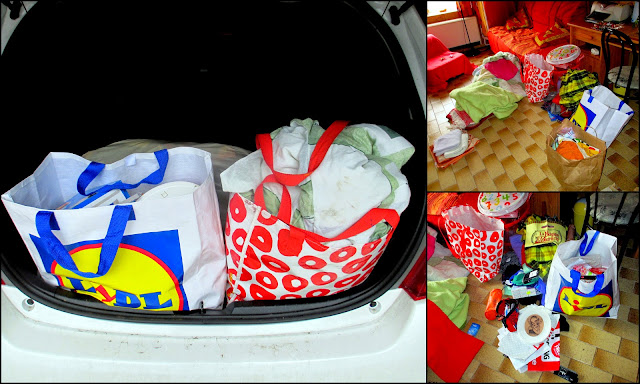 I met a young cleaning woman who loaded all the stuff into my trunk (booth) it was full !
The young woman told me that she came from Chili and we chatted for at least an hour. She didn't want me to go. Now I know everything about her family in Chili and her life in Belgium.

3. Waterloo is under shock ! Our beloved mayor since 1983 and alderman in Waterloo since 1977 was constantly re-elected. And then I read early morning that he was placed under arrest and detained at the prison of Saint Gilles for a corruption case in the Congo. Nobody could believe it. I have met him personally several times and I can't believe it either, there must be something else behind. It is normal in the Congo that if you want to make business that you have to give some money "under the table" it is the use (sadly) and we all think that this has nothing to do with corruption. People were interviewed in the streets of Waterloo and I saw Ilona's mother being interviewed by a TV channel ! I was so surprised to see her on the TV screen. They all stand behind our mayor. Now we will see what happens.

4. I had a phone call from my oldest friend in Germany, we know each other since 1951 ! Her husband will be on ski holidays and she invited me for this week. She lives near Cologne. I will take the Bus from Brussels and she will pick me up. It will be the first time after 20 years that I had been in her home. 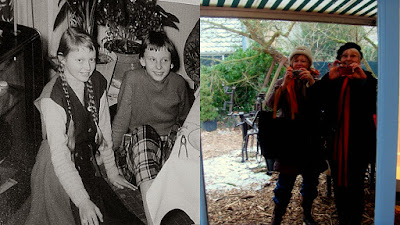 We usually meet in Holland where they have a little holiday house. I think I haven't been in Germany since 2008 !

5. After my painting class I was asked to go to the administration office of the city where three secretaries with a beautiful flower bouquet were waiting for me. Some of you may remember that I had made the Christmas card for the city. The alderman wasn't there, as everything is upside down with the arrest of the mayor. 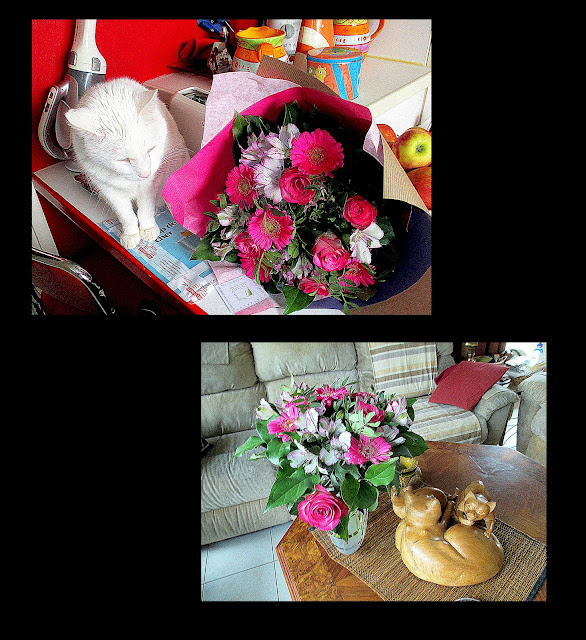 They excused him and we talked a bit about this scandal, and then I took the flowers and returned home. I had thought I wouldn't even get a thank you as I had done this card in December, but administrations work like snails so I got my "thank you" end of February ! At least it wasn't Easter yet.

more participants at Susanne at Living to tell the Story.
Posted by Gattina at 06:30 15 comments: 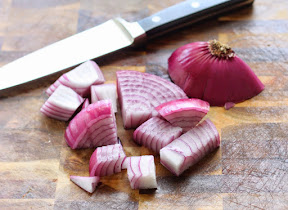 I really like onions especially roasted or cooked, and I love onion soup. The only trouble is you have to peel a lot of onions and that is really a catastrophe. As soon as I start peeling, I start to cry  like mourning women which are hired in Sicily to cry on a funeral. My make up is melting and I black waterfall is running over my cheeks, which makes me look like a sad clown.

I have tried everything to avoid this crying, putting cotton wool around my glasses, peeling under running water and all other tricks and tips which were given to me. Nothing to do I still cried.

Finally I found the solution ! I draped a long shawl around my head and over my nose found a pair of diving googles from my son and put it over my eyes. I looked terrifying and was scared of myself when I saw me in the mirror. Well equipped now I started peeling and it nearly worked, my eyes still burned a bit, but it was supportable.

One day the doorbell rang and completely forgetting my strange outfit, I went to the door and opened it. It was the postman with a registered letter. The poor man stepped back when he saw me and nearly got a heart attack. But then he burst out in laughter and asked me what I am doing. 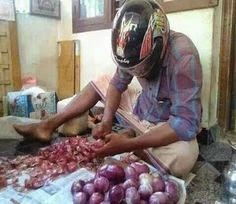 This is also a solution ! 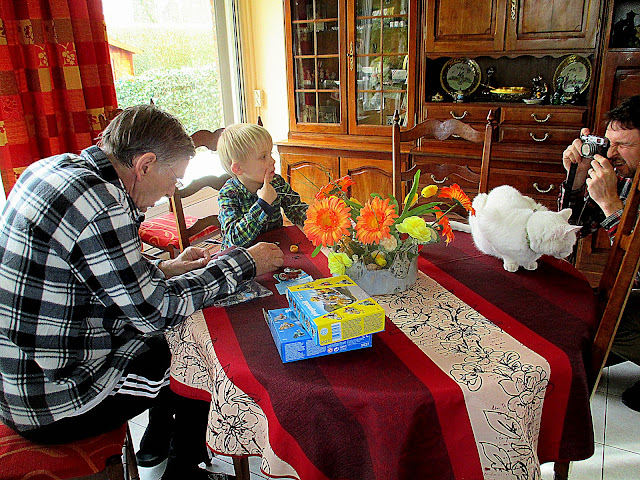 Often, when the weather is so cold and rainy I go to the Indian Shop "Mala India" we have here in Waterloo. All items sold there are for the benefice for street children and orphans in India.

It is a wonderful place to chill out and doesn't really look like a shop but rather like a private house. 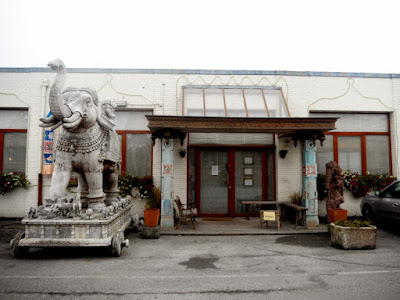 The entrance doesn't really show the treasures which are behind this door. 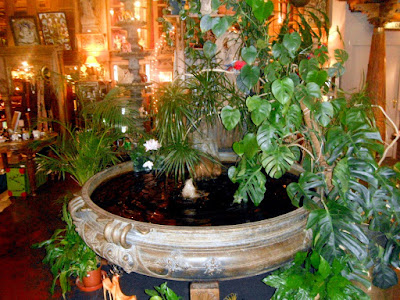 First you see this beautiful well. Indian soft music fills the rooms. Behind the well there is a corner with little tables and chairs where you can have a cup of tea for free. Friendly people are sitting there chatting together. 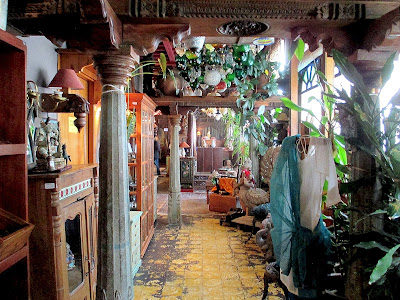 This photo shows the entrance to the living room 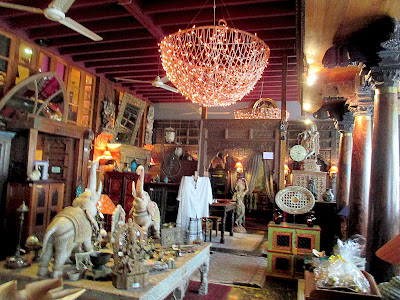 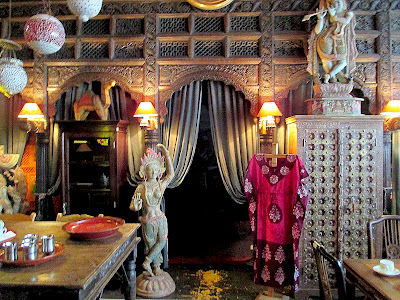 The entrance to the bedroom 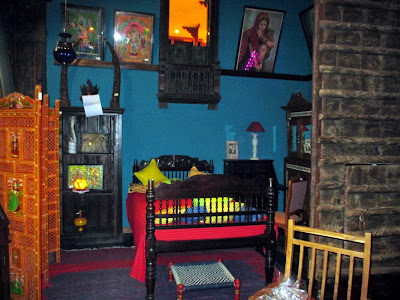 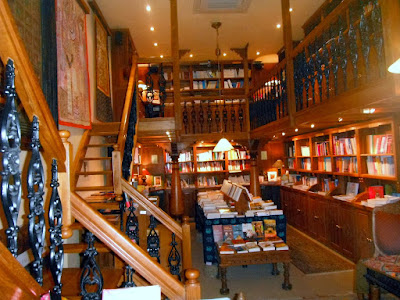 From the library a staircase leads to the second floor 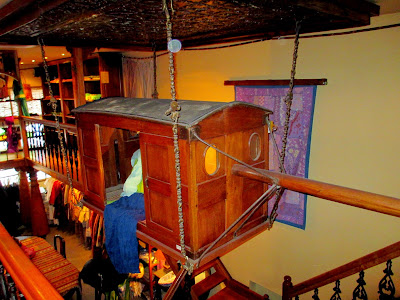 Where a rikshaw is hanging on the ceiling.

MY WEEKEND OF FEBRUARY 21

After having done some shopping on Saturday morning, in the afternoon the weather was so bad rainy and cold, that I preferred to stay home and play with photo shopping pictures and creating new headers for my travel and cat blogs. 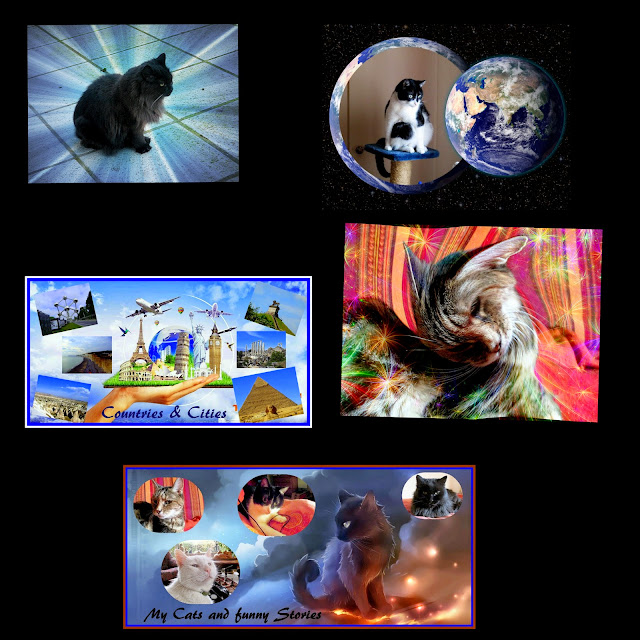 This and some blogging took me the whole afternoon and suddenly the day was over !

On Sunday morning it was so foggy that I could hardly see the neighbor house in front ! As I wanted to go out a bit, I thought I would go to my beloved Indian shop, at least I could take some pictures and it was warm in there. As I had mentioned already that this shop doesn't look like a shop but rather like a  house.

I had a cup of tea in the tea corner and forgot to take a picture ! There were quite a lot of people who had the same idea, it is such a peaceful place. 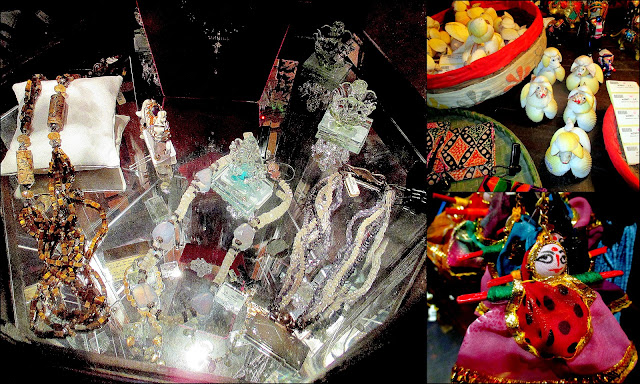 Then I made a little tour to look at all these beautiful things for sale. Jewelery, decorations, clothes and furniture. The little sheep above were made out of shells.

Nicole had invited me for an afternoon coffee. 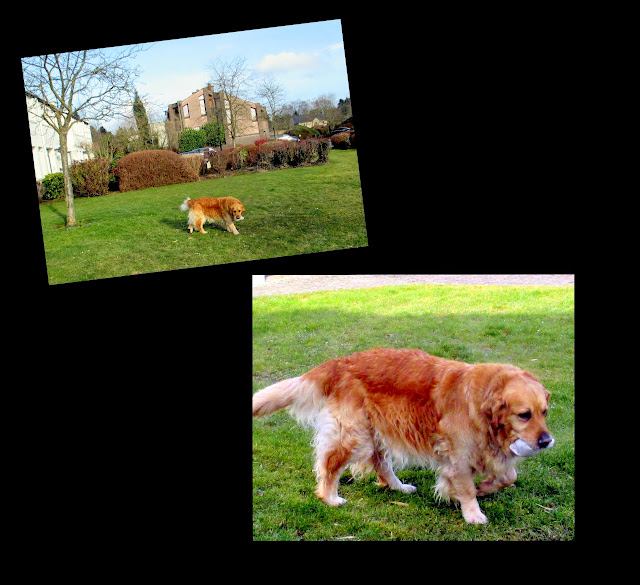 When I arrived I was greeted by Charlie her dog who brought me a present ! It was a dirty nappy full of shit ! I told him to leave it that I didn't want it, but he insisted to offer me such a nice present. It took some time until he finally gave up and dropped it !

A little later our friend came too, to empty her heart because of the Alzheimer disease her husband suddenly got, but what we couldn't understand was that she will have a face lifting to comfort herself she is 77 ! She said she cannot travel anymore so at least she has a nice face to look at in the mirror. On the other hand if it makes her happy ! It would never come into my mind ! I hope she will not look like a blond Chinese afterwards !
Posted by Gattina at 06:30 2 comments: