I don't know why the general opinion about friendship says, that only men entertain real friendship and not women, because each woman sees a competitor in the other one. I don't share this opinion at all, because I know so many longlasting friendships between women much more than between men. It also all depends if it involves a woman or a female. Females need men and don't like women.

I met my oldest friend in 1951 in Bonn (Germany) when we were 8 years old. She lived next door and was very interesting for me because she had a baby sister of 2 and a new born baby brother ! She was very happy when I asked her mother if I could walk little baby sister, that way she was free and could play with the others and I was proud to push the pram.

I always played with her at her place and never at mine, because her parents were very warm hearted and friendly people and with 3 children in the little flat there was always a cosy chaos, not like in our flat, where my mother was busy with cleaning 24 h per day and no room for children to play.

When both our fathers were sent to Brussels to work for the Commun Market (today the European Union) we were neighbours again. She lived two houses down the street from ours. We both went to the German school although not in the same class. When she had finished school, she went back to Germany for her studies. I remained in Brussels, but we always kept contact. We married, had children, at least she had 3 I only one, but also this did not harm our friendship, at least once a year we called each other or we wrote letters.

Meanwhile she is a proud Grandma of 4 grandsons, the eldest one is already 22 ! How time flies by. On tuesday we talked together on the phone and she asked me to come over, she was in Holland in their holiday home and this is only 150 km (93 miles) away from Waterloo. It's a beautiful area at the sea. Next day I jumped in my car and arrived in Kamperland at 11.30 where she and her husband just had a brunch. I joined in and we chatted and chatted and chatted, the hubby tried to place a word, gave up after a while and suggested a walk in the sunshine along the beach. That's what we did, but we continued with our tongue gymnastic and talked and talked and talked. Finally he asked us to drop him off at home because he wanted to place a cable and my friend wanted to show me a little pictoresque town nearby.

In the evening we shared so many souvenirs and laughed and laughed when we remembered that once we walked her little brother in his pram and he was snoring so much. Two neighbour boys (older than us) told us to close his nose and mouth then he would stop snoring, and we did !!! poor baby almost suffocated ! and then later we were teenagers and had the first boys standing in range.

We never ran out of subjects and when I left the next day we still hadn't talked enough ! But there soon will be another occasion.

My friend Gisela and I

and so we looked in 1954, listening to music

and in 1956 when we went to Austria together with our parents
Posted by Gattina at 06:00 12 comments:

Over the years I also got quite some cats out of cristal and glass.

The once in front are out of Swarowki cristal

a parfum bottle I bought in Egypt
Posted by Gattina at 06:03 13 comments:

1. There is no snooze button on a cat who wants breakfast.

3. As every cat owner knows, nobody owns a cat.

4. Dogs come when they're called; cats take a message and get back to you later.

5. People that hate cats, will come back as mice in their next life.

7. I got rid of my husband. The cat was allergic.

8. People with insufficient personalities are fond of cats. These people adore being ignored.

9. As anyone who has ever been around a cat for any length of time well knows, cats have enormous patience with the limitations of the human kind.

10. The trouble with a kitten is that it eventually becomes a cat.

12. Cats are rather delicate creatures but I never heard of one who suffered from insomnia.

13. Cats were put into the world to disprove the dogma that all things were created to serve humans. 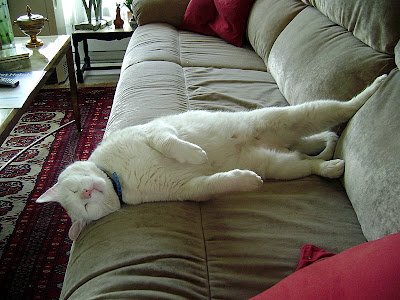 FUN MONDAY - Looking forward to something

Our host Mariposa wants to know

"the things we are looking forward to this year. It could be an event, a date, or anything."

Honnestly I don't know what I am looking for. I love surprises, nice once of course and I would be very happy if such a thing arrives. But so far there is no special event to expect this year, at least I don't know any.

The only things I am looking forward to are my travels to start with my roundtrip through Morocco in May, like I did last year through the South. This time I will do the imperial cities, which will also be in the north of Morocco. We will visit Agadir, Fez, Meknes, Marrakesh (where I have been already) and Rabat, mostly the historical buildings and places.

I found these photos on the net, only the one with the lamps is from me, I took it in Marrakesh. I think it will be a very interesting trip !

Also on my travel list is Berlin and of course the visit to my friends in the UK in August.

Otherwise I am really looking forward to a wonderful spring weather and a hot summer and NO RAIN !
Posted by Gattina at 06:00 19 comments:

On New Years Eve at midnight I watched the very beautiful firework in Brussels, which lasted for 25 min.

and some pictures of the firework
Posted by Gattina at 06:00 9 comments: