I found this somewhere on a blog and tried it out and this is the result. The only thing which really isn't true is that I am a perfectionist ! I am not at all, quite the contrary. I write I don't think and I publish.

When I discovered blogging and started posting I did it for myself without thinking farer. I had finally found something which made me really happy : writing ! Of course I wrote before but that was in a little note book which nobody could read, but know I write on Internet and people even read what I write. That makes me happy. Now when I get up in the morning I have the head full of plans. I have to hunt for pictures for different themes, and to think over what to write. This keeps me busy and I love it. When I had to leave the "active" working world it hadn't been easy for me. I got depressed, I felt useless and had far too much time. Now with 4 blogs to run and still participating in the real life keeps me more than busy !! My days are filled, I learn a lot and I see a lot too. Now I can say that being retired is great ! I started a new life !
Posted by Gattina at 06:09 7 comments:

My youngest cat, little Rosie is not that much an outside cat, she only goes out with "brother" Arthur or with me 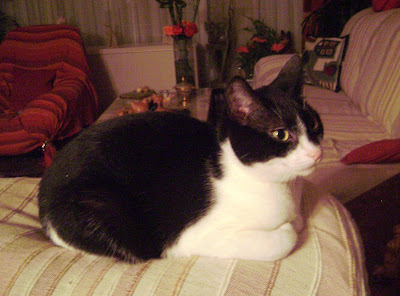 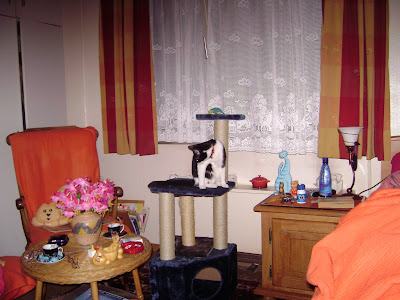 Therefore I bought her a cat tower ! and she is so happy with it ! 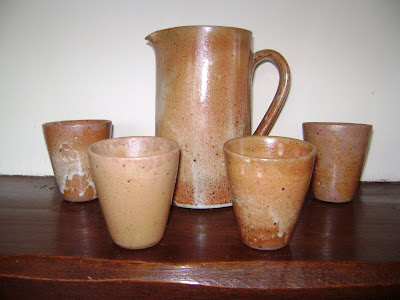 I received this handmade service some 25 years ago. It came from La Bretagne in France and is destinated for cider. But it is also very useful for white wine because the clay keeps the wine cool. 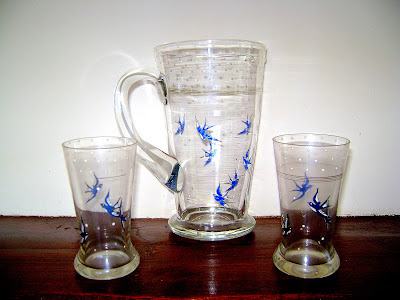 another service I inherited from my grandma. The glasses are handpainted and the service must be at least 80 years old. But it looks still new and I still have all 6 glasses !
Posted by Gattina at 05:52 14 comments:

1. Computers have lots of memory but no imagination.

2. They've finally come up with the perfect office computer. If it makes a mistake, it blames another computer.

4. The problem with troubleshooting is that trouble shoots back.

6. The only way to make your PC go faster is to throw it out a window.

8. Never let a computer know you're in a hurry

9. Computers are like Old Testament gods; lots of rules and no mercy

10. Always be wary of the Software Engineer who carries a screwdriver.

11. Home computers are being called upon to perform many new functions, including the consumption of homework formerly eaten by the dog. ~Doug Larson

12. Don't explain computers to laymen. Simpler to explain sex to a virgin

13. All sorts of computer errors are now turning up. You'd be surprised to know the number of doctors who claim they are treating pregnant men. 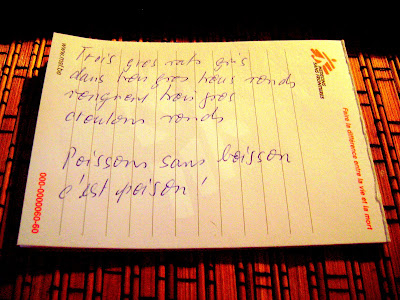 This is my contribution to Sanni's handwriting meme. I choose french because she wrote in German and french is my second mother tongue.

The first sentence is very difficult to pronounce if you have to do it quick ! "Trois gros rats gris dans trois gros trous ronds rongent trois gros croutons ronds"

The words in the 2nd sentence are pronounced exactly the same way but are written different. That makes the French language so complicated. Poissons sans boisson c'est poison !
Posted by Gattina at 05:24 13 comments:

A sunday in Brussels without cars 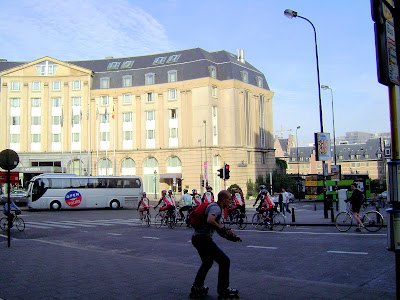 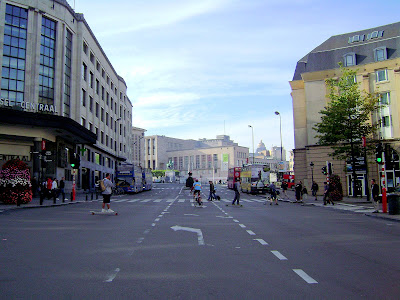 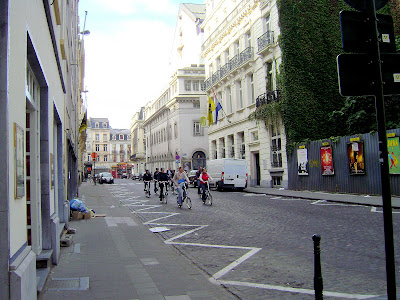 This happened last sunday. It is done once a year to the big joy of people who dig out their bicycles or roller skates.

Low-slung trousers are fashionable among some young people. A law that landed a Florida teenager in jail for having sagging jeans that exposed his underwear is unconstitutional, a judge has decided. The 17-year-old spent a night in jail after police arrested him for exposing 4in (10cm) of boxer shorts in Riviera Beach, south-east Florida. Probably this judge doesn't wear any underwear at all to be constitutional !

The minister said wearing a miniskirt was akin to going naked. Uganda's ethics and integrity minister says miniskirts should be banned - because women wearing them distract drivers and cause traffic accidents. He told journalists in Kampala that wearing a miniskirt was like walking naked in the streets. He should get together with the above mentioned judge, they would be a nice pair !

BRITAIN is heading for a baby boom as the credit crunch is forcing couples to entertain themselves at home. People have limited cash to splash at pubs and restaurants so are spending more time in the bedroom. Sales of maternity clothes rose by nearly half last week.What’s cheaper and more fun than making babies? The trouble is, when they come out they are expensive. And therefore I suggest, that before making babies, open a saving account or at least put a piggy bank besides your bed ! 9 months after having fun the expenses start !

TWO heads appear to be better than one for this turtle from China.
The double-headed creature was pictured in China’s Lyshun Snake Museum in Dailan.
Visitors who get the chance to see the freakish turtle will no doubt be left shell shocked. This turtle must be very intelligent with two brains ! some politicians would also need a second head !

BATTLE of Britain veterans were honoured yesterday for their extraordinary efforts defending the country against Nazi invasion. Prince Charles was among the congregation at a thanksgiving service at Westminster Abbey to mark the 68th anniversary of the victory. What an honor ! with such a hat !!
Posted by Gattina at 06:26 9 comments:


Heather proposed this topic : Sports. More specifically, the sports team that you are rabid about and make you cry tears of joy when they win and tears of sorrow when they lose. And on the flip side, I also want to hear about the teams you love to hate and why you hate them so much .... And if you don't like any sports at all, I don't know what to say to you. Tell us something else you are impassioned about.

I am not a sports fan at all and even less when it comes to sports which attracts hundreds of people in a stadium where they all behave more or less histerical and loose minds. I live in Europe where football (soccer) creates the most of hysterie. People get absolutely crazy and even kill each other if they are not for the same team. We had a game here in Brussels in the Heysel Stadium where 39 people lost their lives because they were trampled to death.

The only sport I like to follow is on TV together with my cat Arthur. He loves Tennis, Golf and even football (soccer)

When he watches a Tennis match I see him following the ball with his head which he turns left, right, left, right. If the ball falls down he would look on the floor to see if it is there. With football it is the same. But when it comes to golf then he really gets excited ! He follows the ball and the swings and beats with his tail and when the ball finally falls in a hole he jumps on the TV unit and looks underneath. He has some "technical" difficulties to squeeze himself under the cabinet because he is quite big (not fat he would say) When he can't find any ball there he is very disappointed but ready for the next game.

So I support cat Arthur when he watches sports but so far he didn't cry tears of joy or tears of sorrow when he couldn't find the ball. Only I have tears of laughter .

This is Arthur watching sports on TV 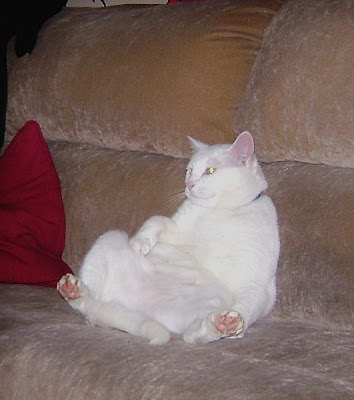 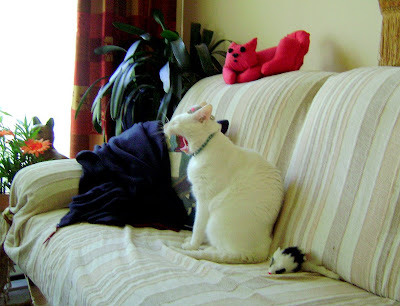 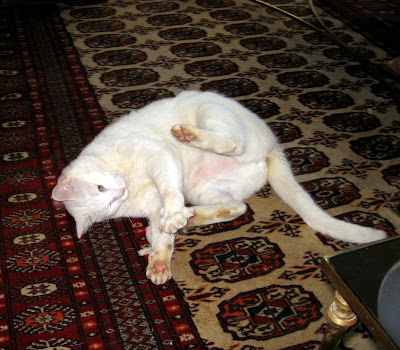 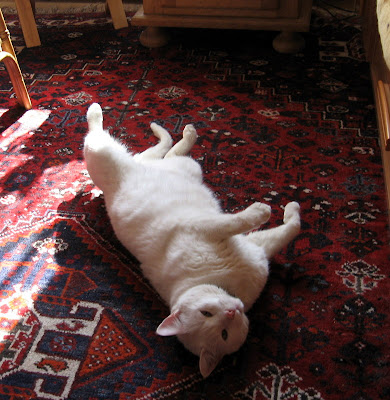 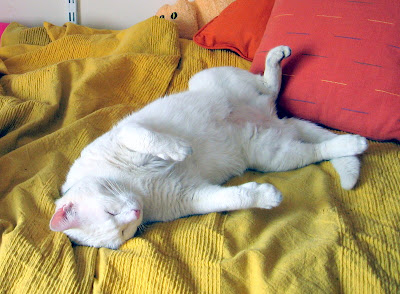 
Not so far from my home are the ruins of the Abbey of Villers la Ville, from the 13th century.
It was beautiful to walk around and in the ruins. 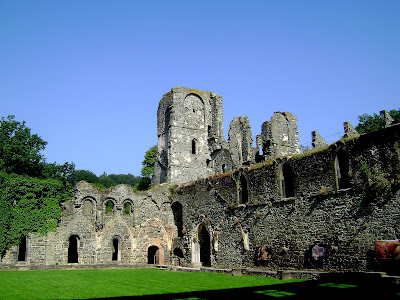 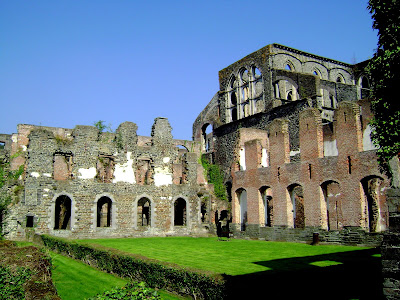 These are only two pictures you can see more here
Posted by Gattina at 05:19 15 comments: