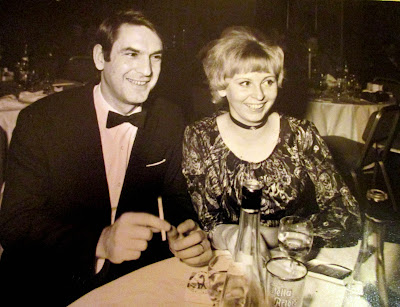 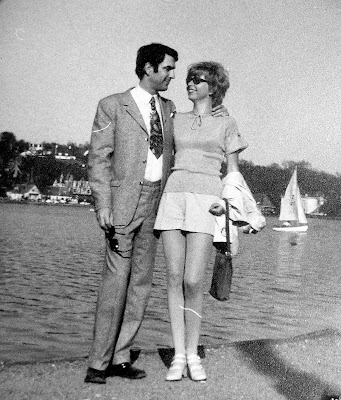 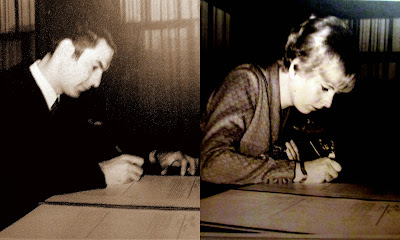 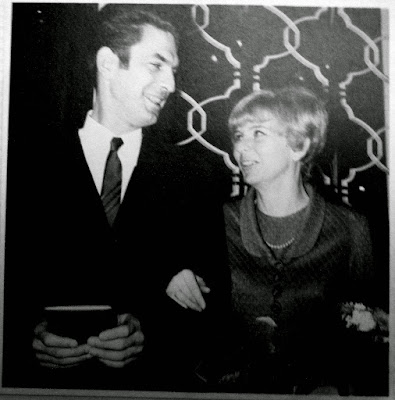 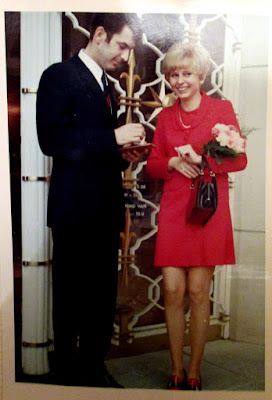 It's now official, we are married ! 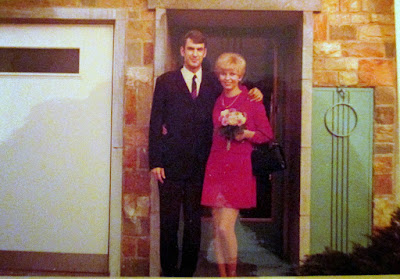 At the entrance of our first (and last) apartment, where we lived for 6 years before we moved to
Waterloo. 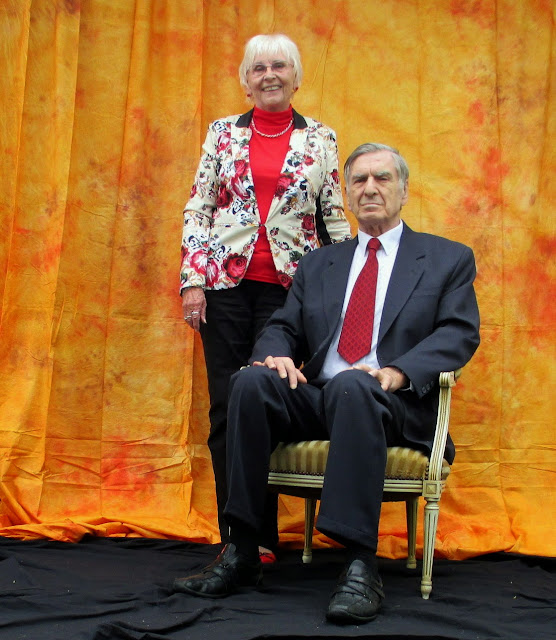 And here is how we are today, our son took this picture in April.
Posted by Gattina at 09:23 16 comments:

1. The week started and continued with cold rainy weather ! Which put my mood and energy in the basement ! Besides the different colored umbrellas and the grumpy people underneath I saw nothing in our street when I was sitting behind my computer and did the Google Gattina street watch.

2. I could have taken the obligatory shower outside before stepping into the swimming pool at aqua gym, but refrained, I was already wet even dressed.

3. To cheer me up and safe me from the sudden polar temperatures, I bought two fleece jackets, one in white with a black border and one in dark blue with a purple border ! They feel cosy and warm ! 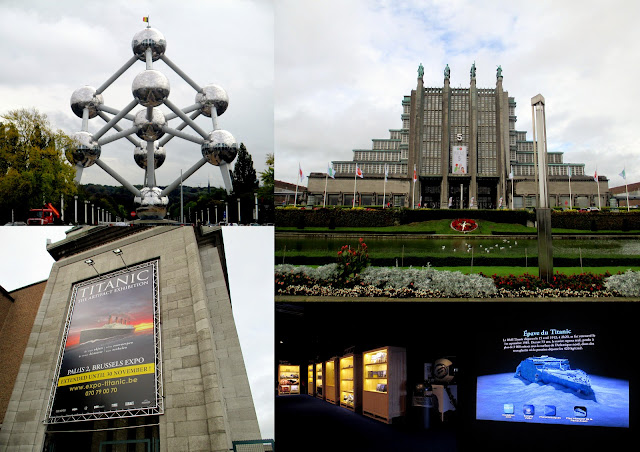 The highlight of the week was the Titanic Artifact exhibition which had already been in California, Las Vegas, Orlando and will move to Geneva after Brussels.

The huge "Expo Brussels" building is just opposite of the Atomium. (on the collage above).
With Dominique and another friend Christiane, I drove to the other end of Brussels and we visited the exhibition. It was very well presented, we saw a lot of artefacts which had survived the long stay in the salty water. The Titanic sank in 1912 and the wreck was only discovered in 1985  ! I will write about it in another post.

After the visit, we longed for a coffee and drove over to the Atomium where we sat in the restaurant and discussed about what we had seen. Madame GPS guided me back through a with traffic packed Brussels, home to Waterloo.

I finished my last painting before our exhibition at the end of the month.

During my whole school career I never wore an uniform. No school had one, apparently just after the war, the Germans had seen uniforms enough and also the parents had no money to spend for uniforms. Even in posh schools uniforms were not allowed, because it would kill the individuality of the child.

The first school uniforms in my life I saw when I moved with my parents to Belgium. I had never seen that in my life, the girls with blue skirts, white blouses and blue cardigans I saw on the street when they came out of school, I found awful. I was usually wearing jeans (which didn't exist in Belgium yet it was 1959) a dress, a skirt or whatever came into my mind. A uniform was in contradiction with the freedom of each child.

Today wearing uniforms in schools is still a big discussion in Germany. There are very few schools who do it, but not with a lot of success.

The black shadow of the past is still hanging over Germany

The minister of education in Germany decided  against school uniforms which are after the Second World War, still in fresh memories of the uniforms of the Hitler Youth and the League of German Girls.

The introduction of a school uniform would mean that students are obliged to wear a uniform at school. That is, they can not decide for themselves what they want to wear and not everyone can wear what suits him and most importantly fits. Thus, the development of individuality is limited and the opportunity to express his personality through clothes would disappear.

In recent times, the introduction of school uniforms has been discussed, but usually the expression "uniform" (the word is the same in German) is avoided in favour of terms like "school clothing" ("Schulkleidung"). School clothing has been introduced in a small number of schools, for example in Hamburg-Sinstorf in 2000, and in Friesenheim and Haag (Oberbayern) in 2005. In these cases the clothes are collections of shirts, sweaters, and the like, catering to contemporary fashion senses. Uniforms in a more traditional sense are almost never proposed in earnest.

In other European countries wearing an uniform at school is also most uncommon. Except of course the UK !

In Belgium school uniforms exist less and less, some catholic schools still have uniforms but not the public schools. In total 8 schools in the whole country. 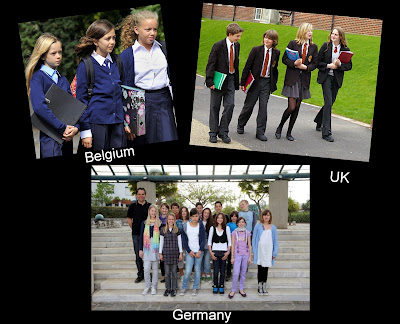 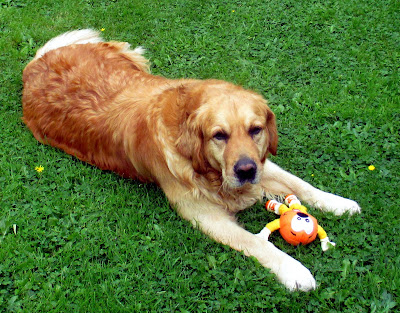 Charlie and his new toy

half an hour later 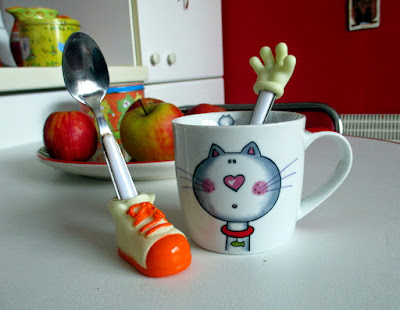 On my way home I discovered by pure coincidence a Sculpture exhibition in Lasne, on the outskirts of Brussels ! It was an outside exhibition on the town hall place. 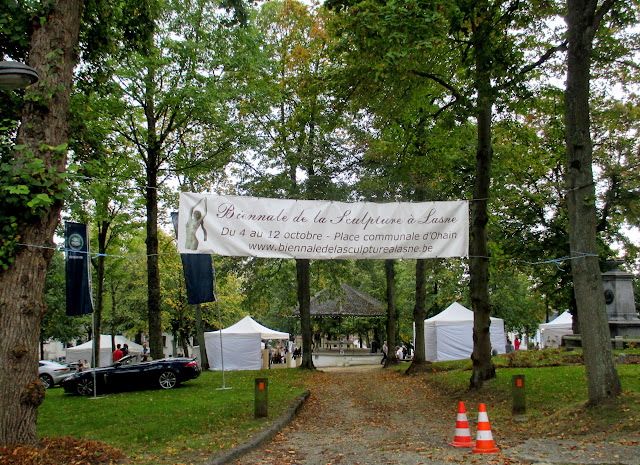 It was the first biennial exhibition of Lasne with the participation of 10 famous Belgian sculptors. 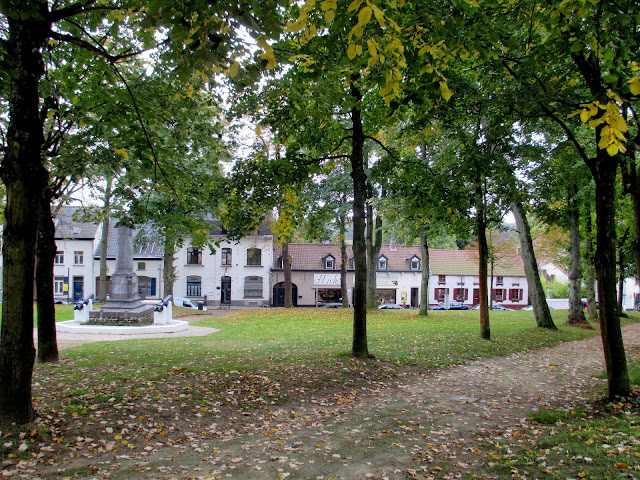 Lasne is a very old little town where it seems that time stood still. 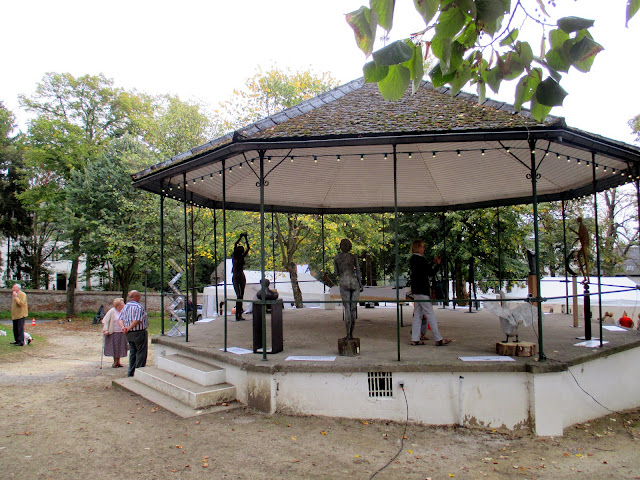 The band stand served to expose some sculptures 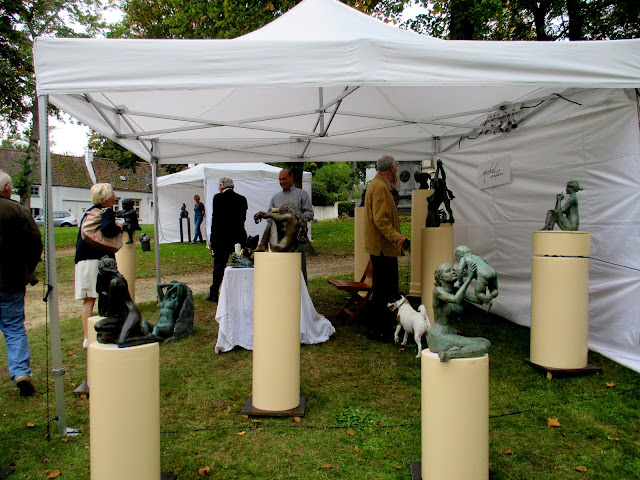 The other sculptors had white tents 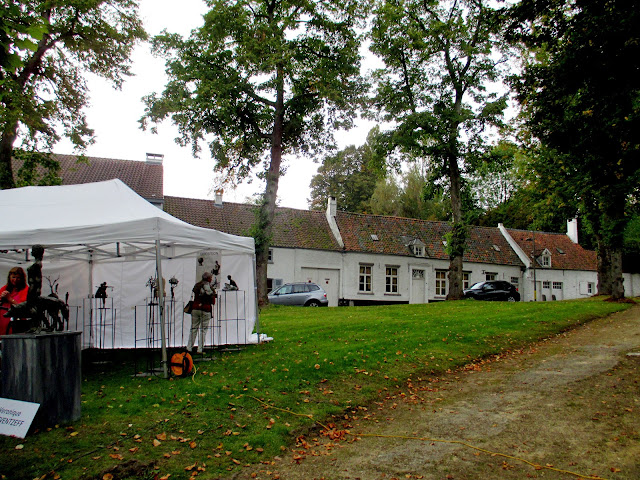 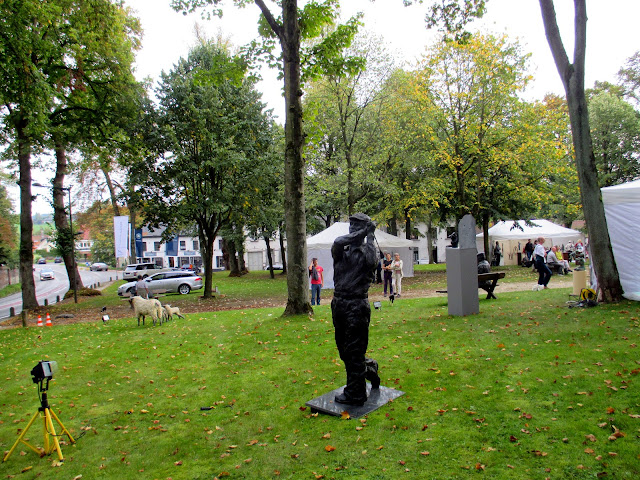 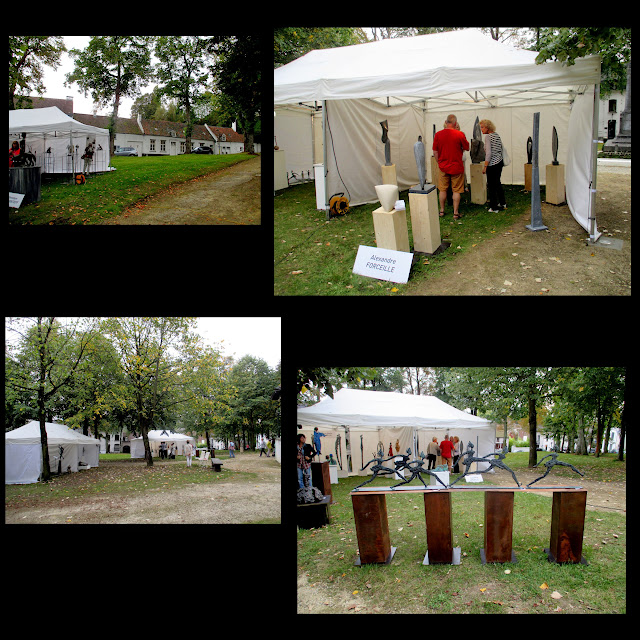 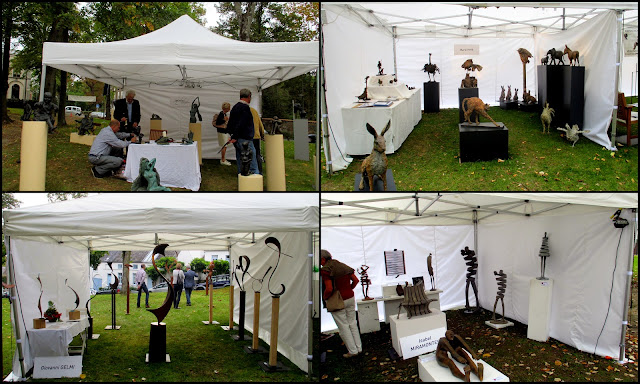 Of course there was Champagne or beer served 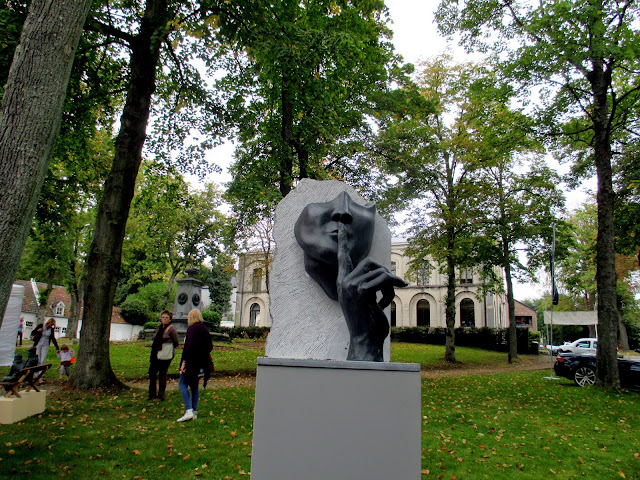 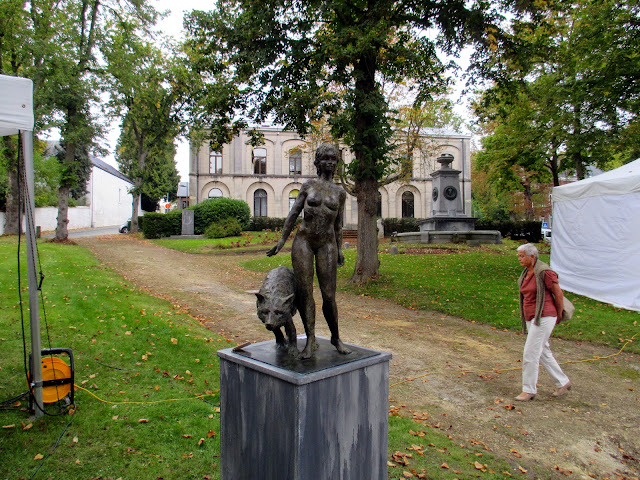 Behind the sculptures is the town hall 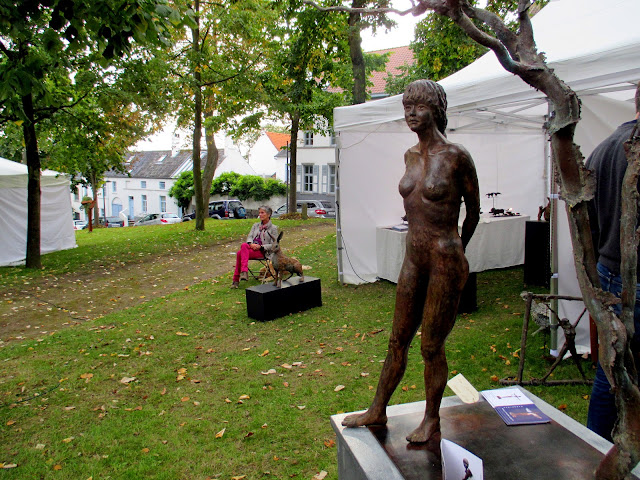 I hope that Google is not shocked to see a naked lady.  I had the experience once, my picture was censored. 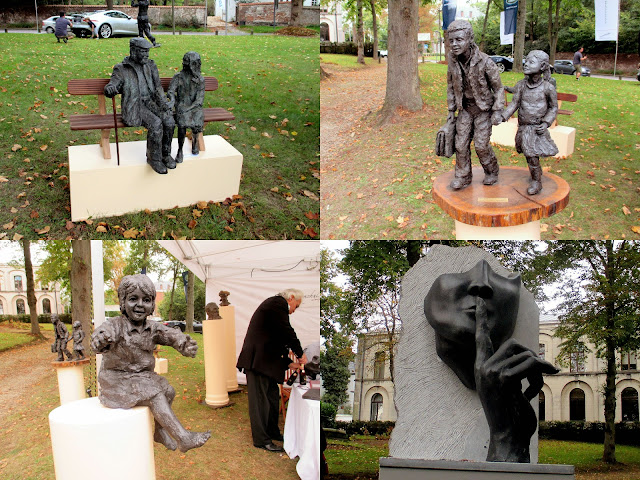 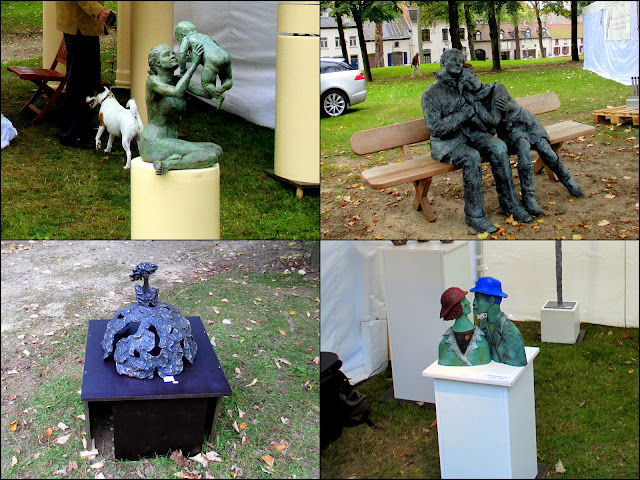 Some of the sculptures were really very nice 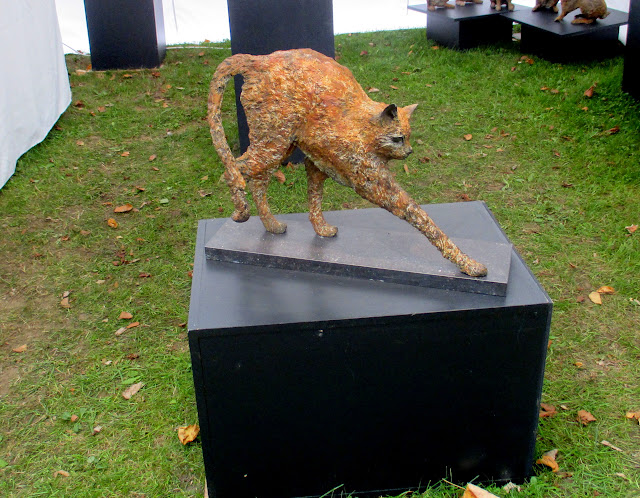 Of course this was my favorite one.

I had a nice walk through the exhibition in warm sunshine and it turned out that this was probably our last sunny and warm day.

MY WEEKEND OF OCTOBER 4

Mr. G has gotten a bone again from his friend on the market, I went to Nicole to bring it. 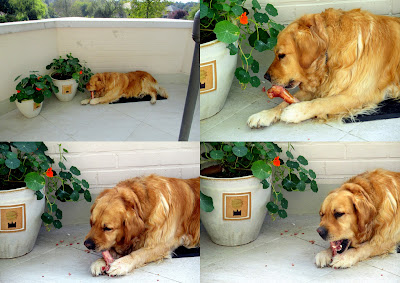 Was he happy with his bone, and while we chatted on her terrace in the warm sunshine he ate it all in no time and didn't leave a single crumb !

I had a look in our basement and found two things which were almost new, but which I didn't use anymore.

A lamp for facial sunbath, and a fryer. So I went to Cash Converter, a second hand shop in Waterloo. Both were refused, because apparently nobody dares to take sunbaths with these lamps anymore, and my fryer's plug was a little green. 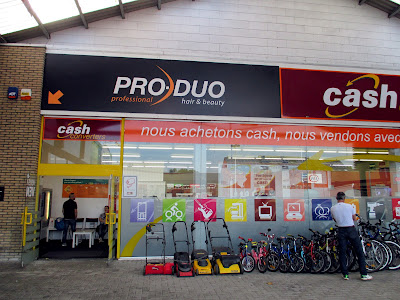 I polished the green away and took it to another Cash Converter in the next city, and there they took both items. Apparently the people in Wavre are less difficult ! I didn't get a lot of money, but still it was better then taking space in our basement !

On my way back on the town hall square in Lasne, I discovered an exhibition of Sculptures ! 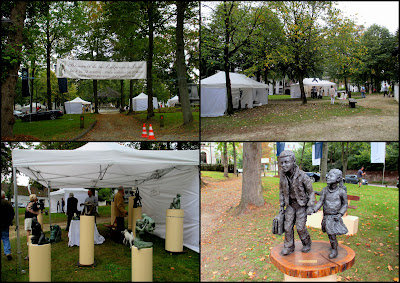 Of course I stopped, parked my car and walked around and admired the sculptures. Some of them were really very nice, others I didn't know what they represented.

On Sunday the weather had changed drastically ! From 22 ° (71 F) it dropped to 12 ° (53 F) and it rained ! I have my personal weather station, because in the middle of the night I woke up and felt something very wet and furry, it was my cat Rosie who announced me with her wet fur that it had started to rain outside !

I decided to spend the day at home, and not to look out of the window ! I did the laundry and baked a bread, while I was watching TV. That was easy and not tiring. Folding the laundry was another story. I don't like to do that.

As a treat I spent the rest of the afternoon to create new headers for my blogs as the fall season apparently has started definitively. 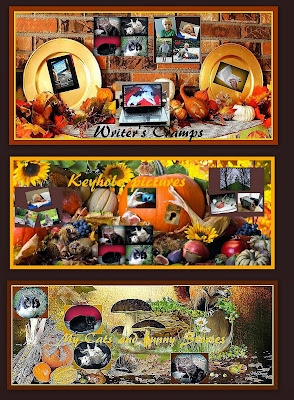 And this was the result. Time flew by, I just had to interrupt me to put on a warmer pullover.
So if you have header problems. I love to create !