The week started with me looking through my clothes prepare a list what to take along for my stay in Amsterdam at my son's house.

The next day two friends came by to enjoy our garden in which it was nice and cool while theirs was so hot that it was impossible to sit outside.

On Thursday then I left for Amsterdam. I first took the train to the Brussels' North station where the Bus for international travels have their parking. Very easy to find and not much to walk. 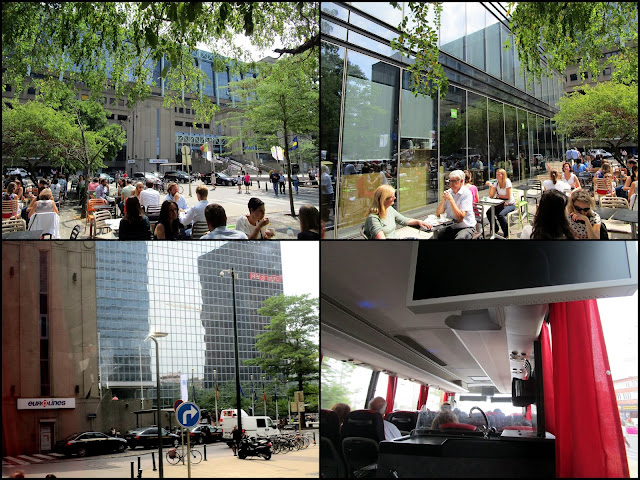 I had a sandwich and a drink and waited for the bus ! It was very busy at the North station and I saw buildings I had never seen before.

The bus was very comfortable and had wifi too. 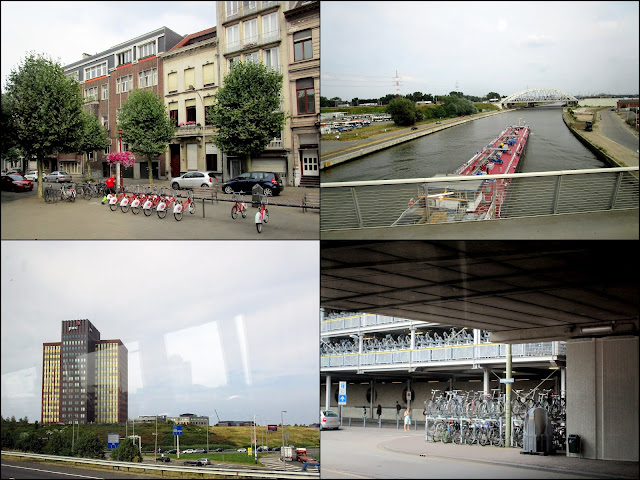 When I saw canals and bicycles I knew that I was in the Netherlands ! Below right there is a special parking for thousands of bikes !  I think we were in Den Haag.

I arrived even a little earlier in Amsterdam there had been no traffic on the highway. Shortly after my arrival my son and Toby picked me up and we drove home.

There I met new family members two guinea pigs, and while we were eating outside they were running around in an outside cage. 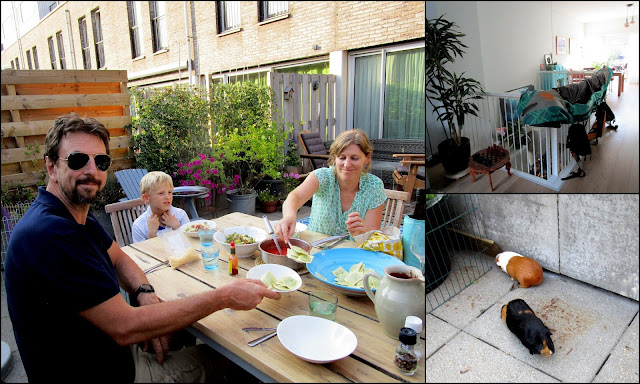 My DIL had prepared a delicious supper, fresh raviolis filled with spinach and mozarella and a tomatoe sauce with lots of vegetables. As desert I had an ice cream !

We chatted a bit and then I went to bed and Toby too, I was rather tired after the long day !

Probably I can't answer comments as usual, lack of time !

more participants at Susanne at Living to tell the Story.
Posted by Gattina at 11:30 13 comments:

When you read this I will probably sit in the bus and travel to Amsterdam, where I have been invited to keep an eye on Grandson Toby. I can't say babysitting anymore, as he is now  more then 7 years old !

I rather suspect him to keep an eye on me ! 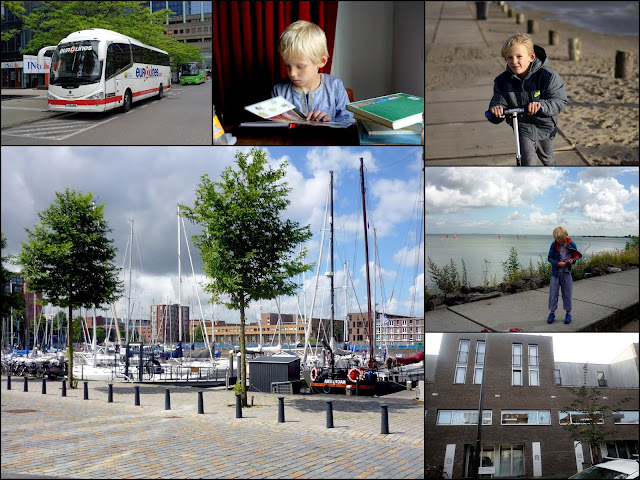 I only hope that the weather will stay warm and sunny then we could go to the beach which is only 10 min walk away !

Mr. G thought I would leave him forever because my little suitcase was so heavy, but I had to take along for warm and cold weather ! Our weather here is always so moody ! During one night the temperature can drop by a half !

Next time I'll write from Amsterdam !
Posted by Gattina at 09:34 8 comments: 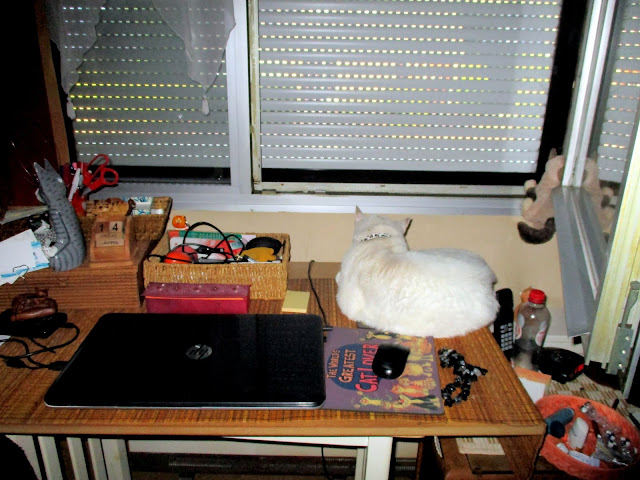 
1. I feel most energized when I am in a group or if I am under stress . 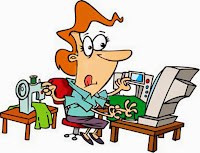 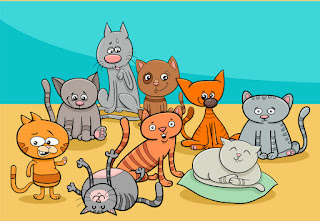 2. Where were you ten years ago?

Now I realize how useful is a Blog ! I checked, and read that at this day precisely we were on our way to Italy and had stopped overnight in a little Bavarian town

3. July 17th is World Emoji Day. Do you use emojis? Which one's your favorite? Your most used? 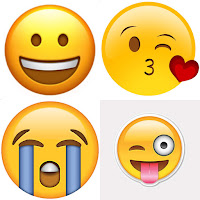 Here are the once I use, but only in Messenger or Whatsapp, anyway they don't exist on Blogger comments !

4. What song would you put on a wedding DO NOT PLAY list?

The song of Andrea Bocelli Time to say Goodbye

Less attention ? then I don't pay attention at all it's not worthwhile. More attention I would pay not to miss an appointment or if I am responsible of a person. 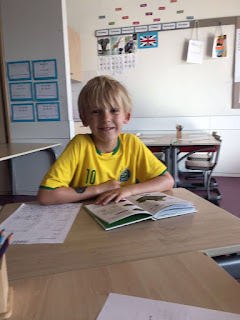 I am thinking what to take along for my trip to Amsterdam, where I will keep an eye on little grandson Toby meanwhile 7 1/2 who starts his summer holidays. Apparently it will be warm to hot, but it could be the other way around, you never know !

It had been quite a long time that I hadn't been at the "Lac Genval" which is not far from Brussels and a favorite target for city people to walk around the lake and have a drink in the restaurants and Brasseries around the lake. It's not very big, only 1 km long (0.62 miles) and 250 m (820 ft) large.

The view over the lake is so peaceful 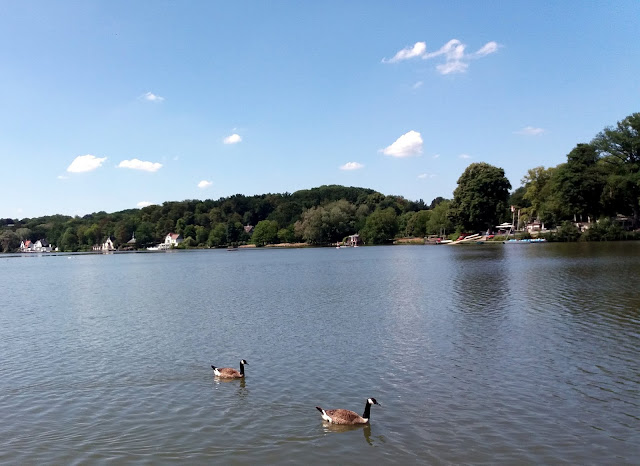 Especially when we were there, because as the World Cup football (soccer) game started at that very moment and the streets were empty, normally the otherwise busy lake was empty too and the ducks had a lot of space ! 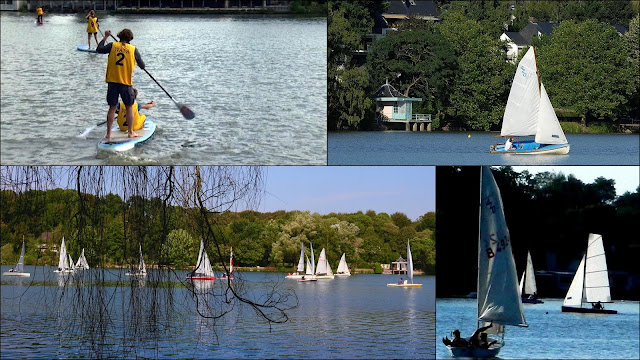 Sailing, surfing and other water sports usually take place, but not that day ! 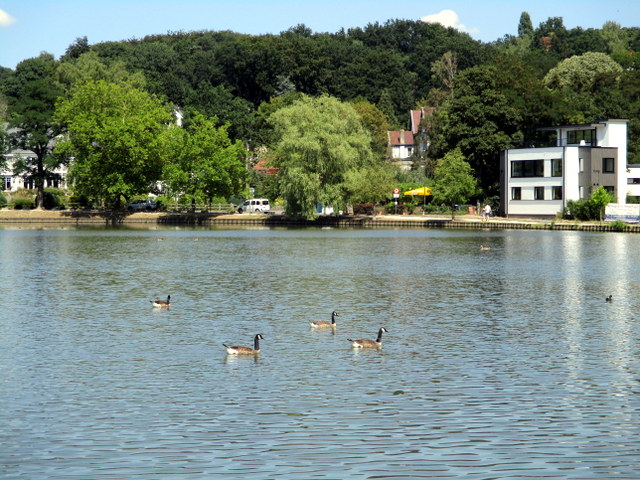 Still we could see the beautiful houses on both sides 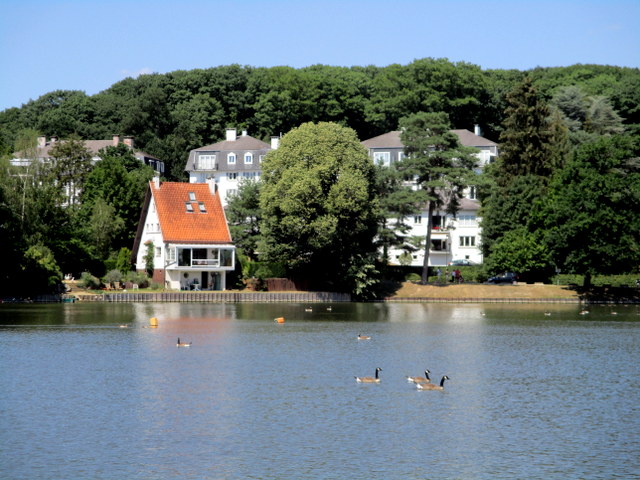 Most of them a very old 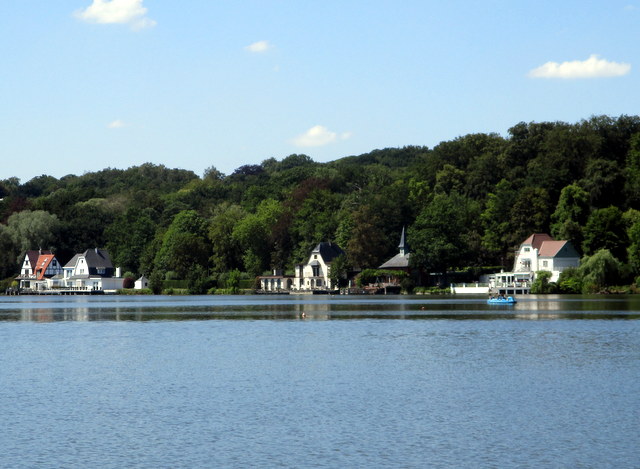 and I suppose rather expensive too ! 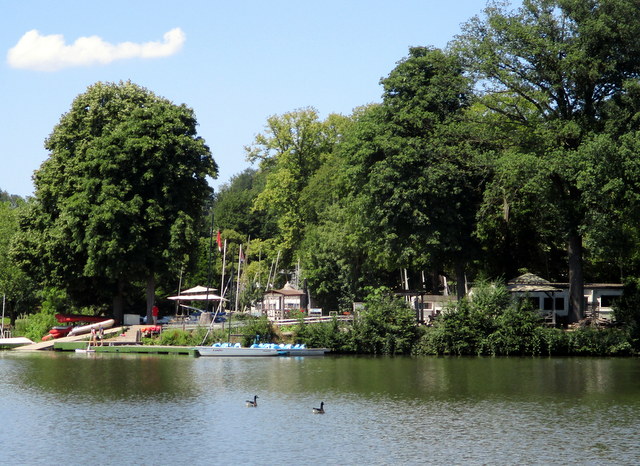 Here you can rent boats or surfboards etc 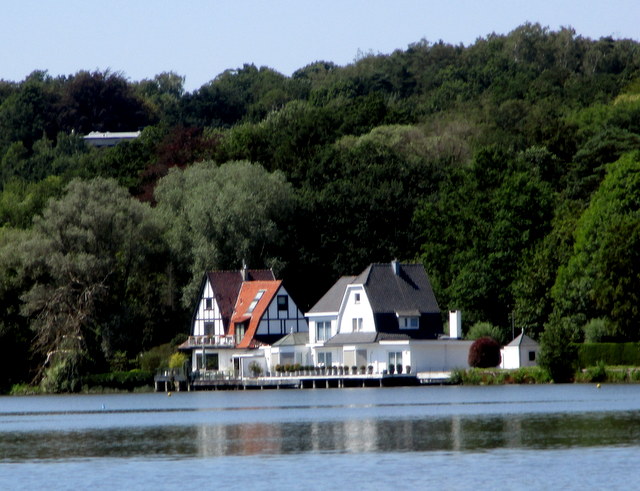 one of the old houses 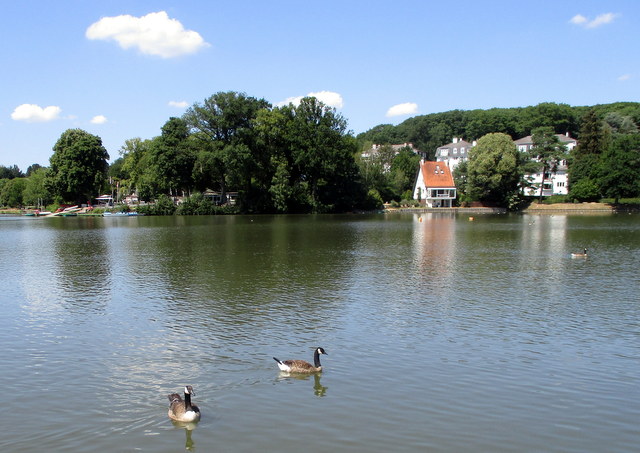 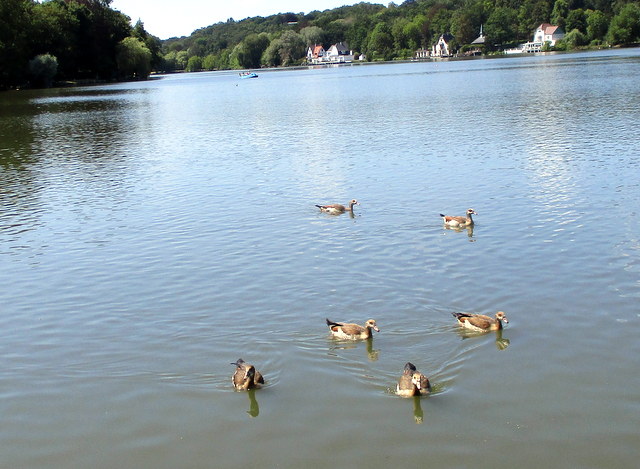 and all different kind of ducks 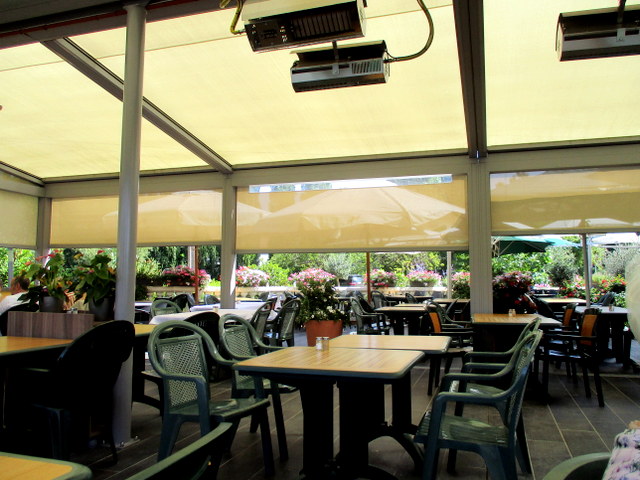 The restaurant were we had our drink was also unusually empty, because they didn't have a huge screen to watch the game between Belgium and the UK.

The wonderful summer weather continues and my outside office is daily in use ! 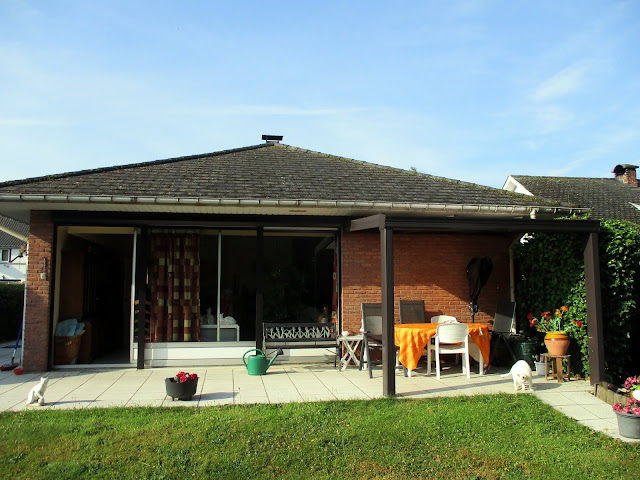 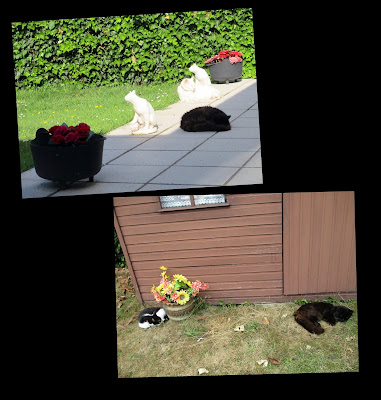 In company of my not very entertaining cats, because they do nothing but sleep I try to put my posts together and my pictures too; 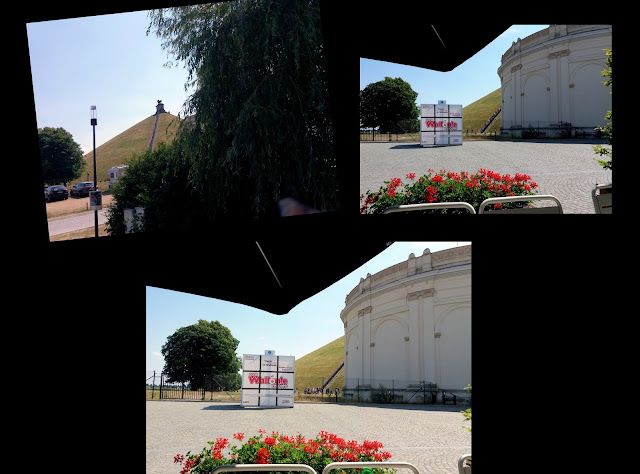 To increase the holiday feeling I had a drink at the Waterloo Lion, where some Japonese and British people tried to climb up the 253 steps in this heat. There were a few Belgians too, but they were very disappointed because they had all seen the site before the bicentenary when it was nice and cheerful and not a sad and austere place as it seems to be now. 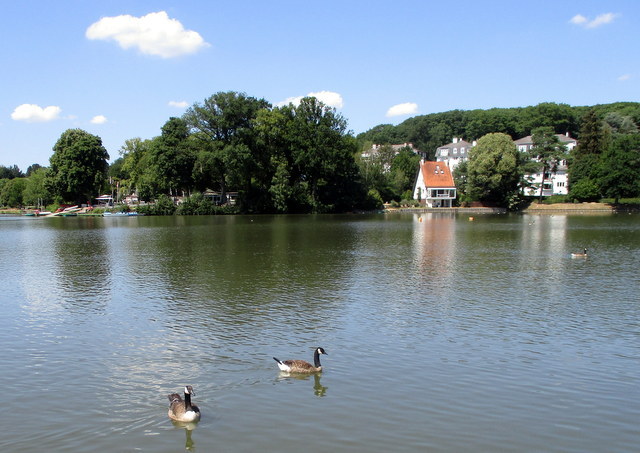 Nicole, Bunny and I took the opportunity to go to the Lake of Genval as the streets were empty, people were watching football, Belgium against the UK ! Later when we were at Nicole's we heard the whole city screaming and the cars horn, so we knew that Belgium had won. 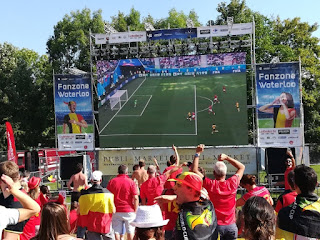 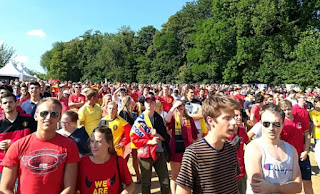 This shows the people in the park when the game was going on. I just drove by. I am not interested in football, but I like the ambience. 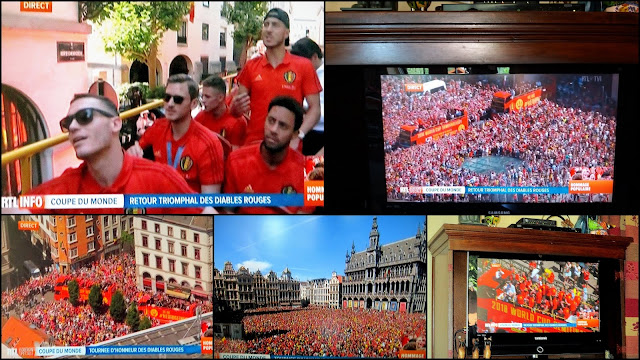 On Sunday the devil was going on in Brussels, literally, because the "Red Devils" had returned from Moscow to Brussels, had been received by the King and the Queen and then went in a red double decker bus through the city to the Grand'Place where 9000 people were expecting them ! Some arrived already at 7 am to be sure to have a good place to see them. I had a very good place in my chair and took the pictures from there. I had never ever seen so many Belgian flags and such a patriotism, because we are supposed to hate the Flemish people and vice versa, but apparently this is only in the mind of the politicians and doesn't concern the people. Waiting so long in this heat (it was around 30°C) just to see them ! Crazy. Apparently football (soccer) brings people together. Belgium is on the third place on a worldwide level which is really not bad at all !
Posted by Gattina at 07:00 5 comments: