THE DECLINE OF MY COOKING

The extended coffee breaks during my painting class gives us the opportunity to change the world and discuss all kind of female problems. Not so long ago it came to cooking !

We are all more or less in the same age range and have cooked for our families for at least 20 to 40 years. Some of us still love cooking others are really fed up ! That's my case too, and the worst is, I forgot cooking ! Even to cook a boiled egg seams difficult to me.

When I lived with my parents I was not allowed to put my foot in the kitchen. My Mother worried far too much that I would break something or spoil her immaculate kitchen. When she cooked it was a drama ! Red faced she juggled around with pots, pans and plates and finally brought a Spaghetti on the table, and was completely exhausted. Therefore it wasn't my mother who taught me cooking. Actually nobody did.

At 23 I moved out and took an own flat. In the 60th that was very unusual a girl had to stay with the parents until the charming prince took her away. I wasn't interested in charming princes and preferred my own 4 walls. At that time I needed the signature of my father to rent a flat !! He signed without any protest, probably happy to get rid of the pain in his neck.

Once alone I started to cook ! It became my hobby. When I married it continued and I loved to go in a restaurant, order a plate I didn't know and try to copy it at home. And it worked ! That made me very proud. I don't know exactly when I started to dislike cooking. Unfortunately it must have been during the time when our son started to appreciate good cooking. So now he thinks that I have always been a lousy, lazy cook ! Fortunately Mr. G. is a witness !

In fact when I started painting in 1989 I put all my creativity into painting and nothing was left for cooking, but you need creativity to be a good cook. And I wasn't the only one when we talked about cooking in our painting class, most of the women felt the same, a few said their cooking improved since they paint and the rest had noticed no difference.

So now I compose frozen food. We have a specialized shop here which has its own farmers, working for them the vegetables and meat comes from the farm and is shock frozen.  It is so good that lots of women pretend that they had cooked the plate themselves. And the guests appreciate and say : "you never have cooked something so delicious " !

Retired people or people living alone are faithful customers in this shop and now before Christmas and New Year they had to hire students to help for the sale and the shop is always packed !

1. Nothing special happened this week, besides picking up a last gift. Grandson Toby had asked for a Pokemon backpack for the school and I had to order it, it was not in the store anymore. All kids want Pokemon stuff, wherever they live ! Fortunately they still had it in their internet shop so I could order it there and pick it up in the shop. Unbelievable the amount of people in the toy shop, you could think that everything is for free. It was a Monday morning and the shop was full already !

2. I managed to go to Nicole who had some sewing done for me, we are the perfect team, I help her with all her tablet and paper stuff and she helps me for sewing and repairing things, each one of us in their speciality ! We chatted about Christmas and if we had forgotten nothing.

3. It's a nightmare to drive for the moment the city is packed and you ride in snail mode ! I try to avoid the main streets and use the little streets which are less known and so I slip through to the center. To get a parking space is a like buying the right lottery ticket ! 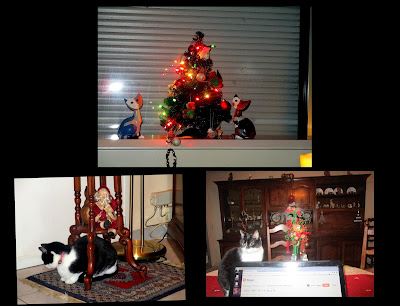 For the moment I moved my office into the living room, to enjoy the Christmas decoration and also because it's warmer there. Rosie does the survey !

4. After 4 month of complete silence, my "friend" and neighbor Dominique called ! She hadn't been here not even for her house next door, which stood there like she had left it 4 month ago ! She had never come back after her marriage in September, although she lives with her new husband only about 10 km away, probably less ! We had lived for 15 years side by side, travelled together and spent a lot of time together, and she gave not even one phone call. I was really hurt. And then suddenly she calls as if nothing had happened, and asked me how I am !! I could have died in between, her house burnt down or other catastrophes could have happened, and she asks me how I am. I "assured" her that I am fine and then told her friendly that she could go to hell, and maybe show up next year. Friends like that I really don't need. As one in my painting course said : "What ? and all that for a guy ??" Probably now that the house will be rented she needs me to receive eventual tenants ! She has always called when she needed something. Some people are clever !

5. Our painting class celebrated Christmas ! What fun ! Everybody brought something to eat and Champagne to drink. There was a huge variety of food on the table ! Cheese, foie gras, cakes etc. 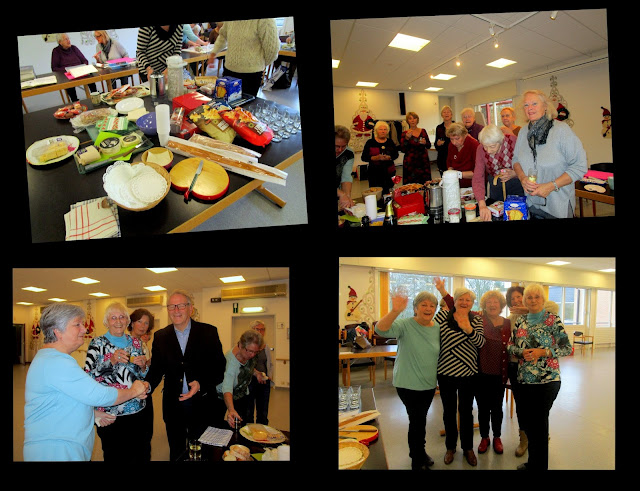 And here we were all, even the alderman for finance and social services came to wish us a Merry Christmas. After 4 bottles of Champagne and a full stomach we returned home and all regret that we have "school holidays" for 2 weeks ! 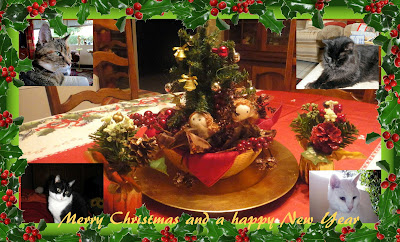 more participants here at FIVE ON FRIDAY
Posted by Gattina at 07:00 14 comments: 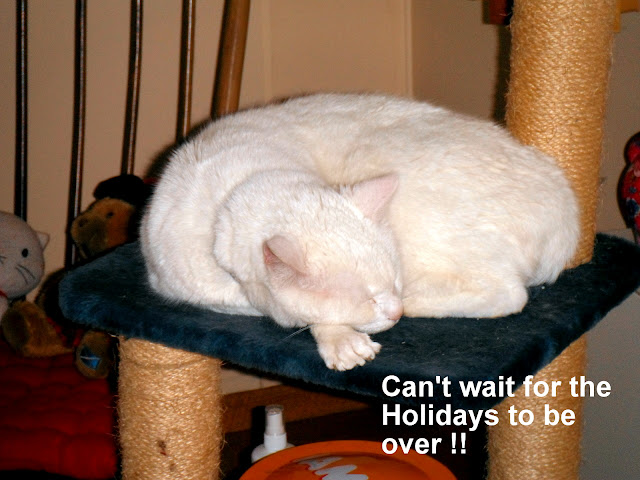 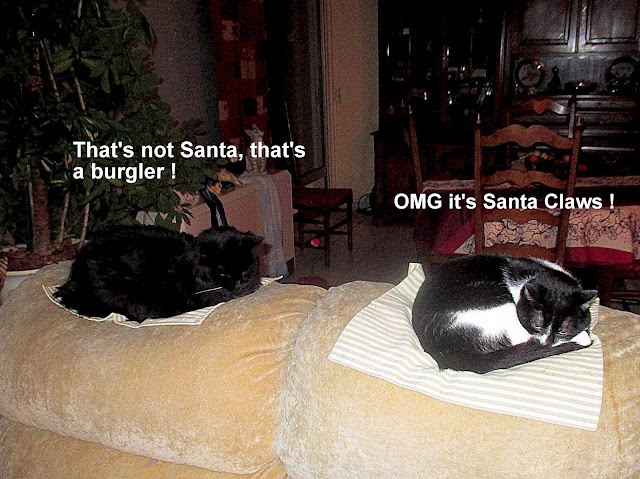 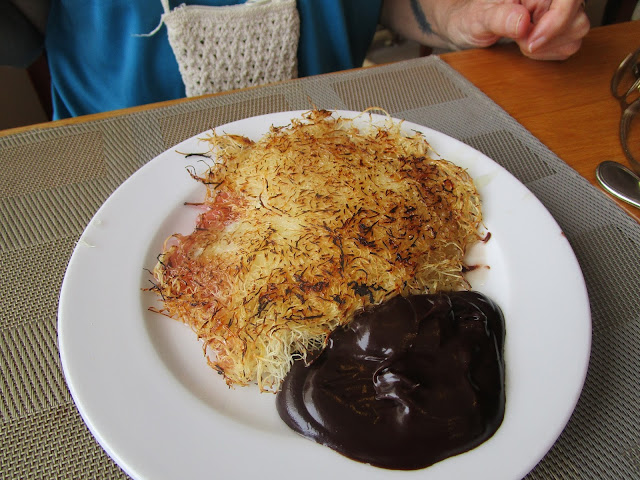 An Egyptian speciality, a "hairy" crepe with dark chocolate. Delicious !


1. What's left to be done on your Christmas to-do list?
Just the food shopping

2. The Hodgepodge lands on the first day of winter this year. What's your favorite thing about winter?
Nothing at all ! I hate winter ! I am born on the wrong side of the world !

3. In what area of your life are you immature? Feel free to elaborate or not.
That's a difficult question. When I think I am mature, people think I am immature, and the other way around. The best thing is to ask my family and friends !

4. What was the most (or one of the most) important lessons you learned in 2016?
That it is impossible to stick on childhood traditions. Especially for Christmas.

5. It's Fried Shrimp Day...are you a fan? What's your favorite way to eat shrimp? Will there be shrimp somewhere in your holiday feastings?
I love shrimps in general fried or cooked  of all kinds of recepes but not raw

6. What sound lulls you to sleep?

The purring of my little cat Rosie

I have no special thoughts today, except I wished all these year end festivities would be over and we go back to normal life and towards spring !!

From this side of the pond
Posted by Gattina at 07:00 9 comments:

Since a few years there are Christmas markets a little everywhere in Belgium and not only in Brussels. Waterloo joined in too. At the very beginning it was just a small little market in a huge tent in front of the city hall. But this year it was different. It had become a nice market with about 30 chalets.

On Saturday morning I was in the right mood to attack my Christmas decoration ! Mr. G. carried up two boxes from the basement and fell exhausted in the next chair. As each year I didn't remember what was in the boxes I opened them and to my surprise it was very easy I had them packed properly last year ! 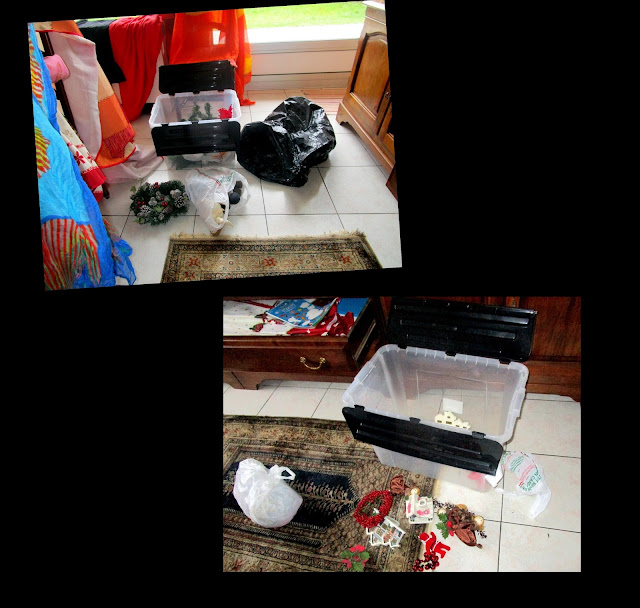 From our 4 cats none was interested in angels, Father Christmases or little balls. 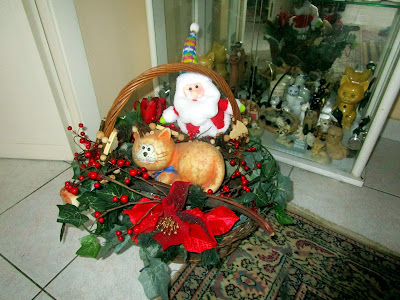 I added a Father Christmas in the basket at the entrance 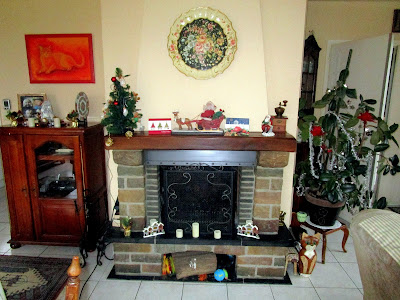 Then I continued with the fire place 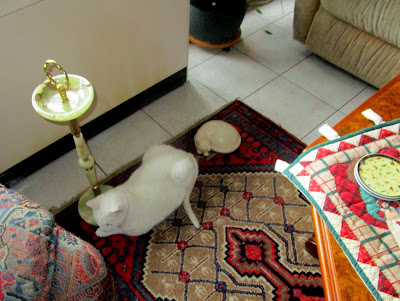 Arthur was not impressed 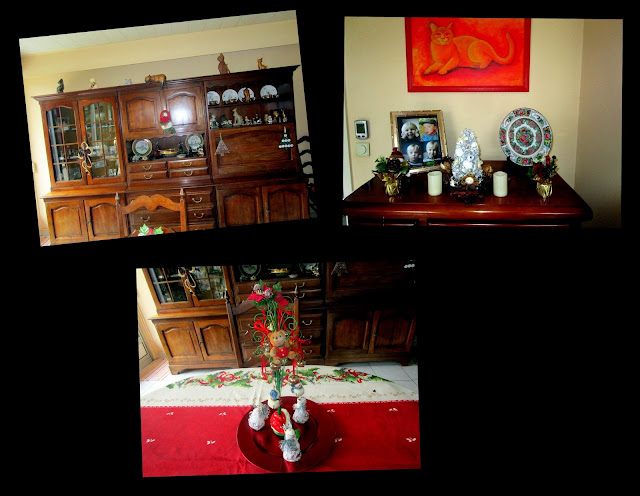 The dining area came next 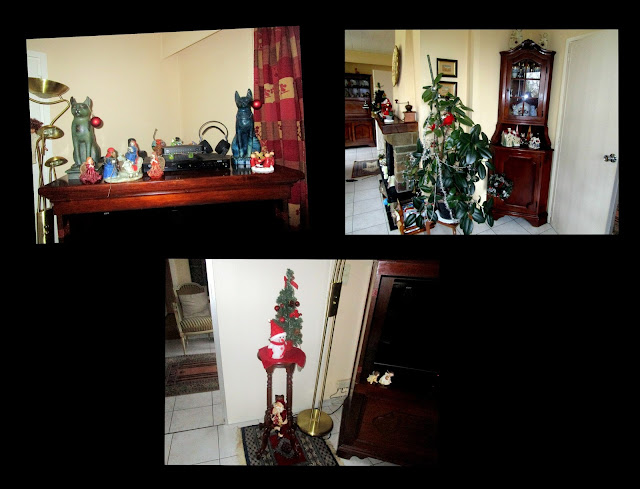 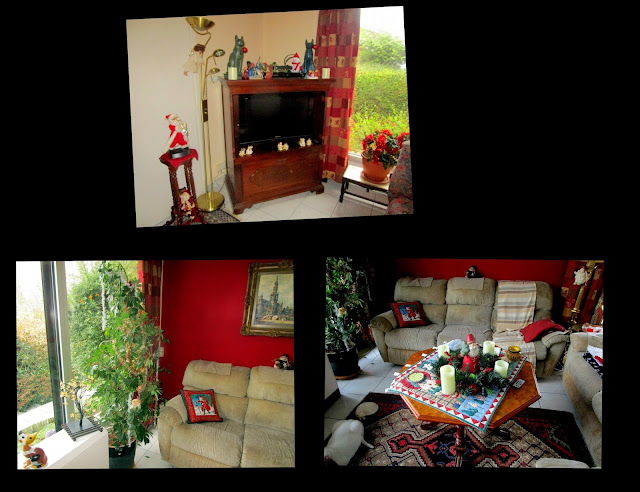 and then the television and the sofa corner 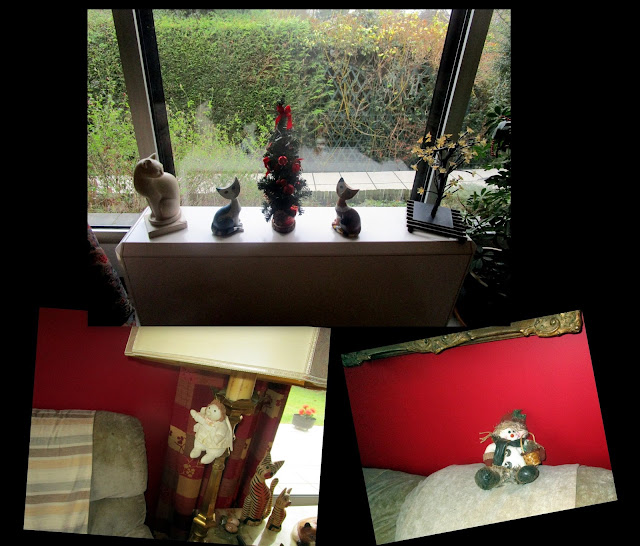 and on the radiator I put a little Christmas tree and the living room was ready. Nicole came shortly to pick up a form I had printed for her and admired my work.

In the afternoon I went to the Waterloo Christmas market. 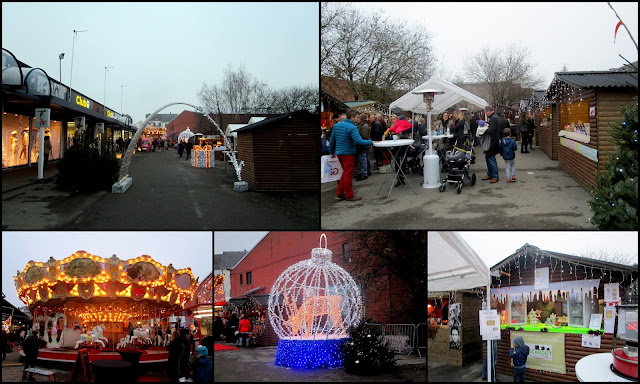 which takes place each year, but the last two years I haven't been there because it looked always the same. This year I thought I needed a few Christmas pictures and went looking. To my surprise it was quite big, far bigger than the years before. At least 30 stalls while the years before it was in a huge tent and on another place. I made my pictures, just had a look in my favorite boutique to see if there was something for me, but found nothing and went home.

On Sunday I connected the lights on the mini tree, and discovered two old suitcases in the basement with the inscription "Christmas decoration" ! Of course I wanted to know what was in there. Mr. G. opened them and we found Christmas balls and ornaments to open a shop, garlands, a crèche and lots of other stuff I didn't need  anymore probably, it was the accumulation of 47  years  of Christmas celebrations ! He closed the suitcases again and put them back ! Maybe I should consider a "Garage sale" and sell all this Christmas stuff in summer ?

On Sunday we had an awful weather, it was humid and misty the whole day. I pottered around a little in the morning and did some laundry, in the afternoon Nicole had asked me to come over for a cup of coffee. 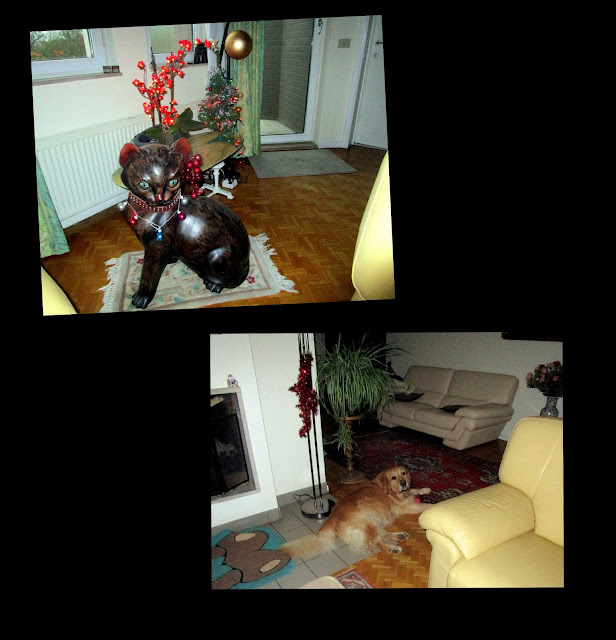 I brought a bone for Charlie who was the happiest dog of the world and admired Nicole's Christmas decoration. She too has no tree, but has put garlands and candles and lights a little everywhere.