From the year on I was allowed to stay up all night on New Year's Eve, besides all other New Year's traditions I loved Bleigiessen, which means Lead Pouring and is a fun way to “predict” the fortunes of the coming year. 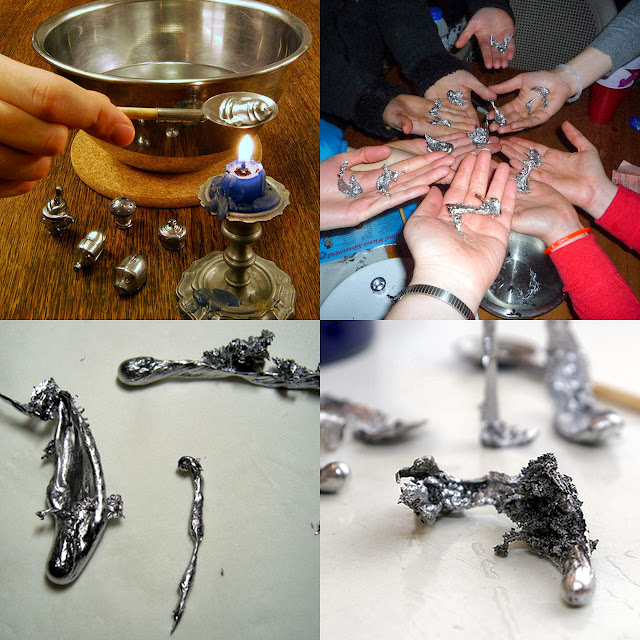 We all got a little figurine in small shapes of animals, mushrooms or other subjects cast in lead together with a metal spoon. Then we had to hold the spoon over a candle’s flame until the lead melted and then had to pour it quickly into a bowl of water. The water immediately cools the lead into pieces, no two of which are alike. We then retrieved the cooled lead pieces from the water for inspection. We had to figure out what they could be, just like some modern art sculptures, when you have to rake your brain to see something real. The melted lead sometimes had so funny shapes and we had a lot of fun to find out what it could be and predict what will happen to that person in the coming year. It was a very creative game and even the usually so serious adults developed an amazing phantasy.

When my parents moved to Belgium in 1959 this tradition didn't exist at all. Actually at that time people spent the whole evening around a table and ate until midnight. There wasn't even a firework. I found this really boring. Each year we returned to Aachen which is just at the Belgian border and bought our German tradition's Christmas and New Year's stuff on the Christmas market. I remember the first year when in the street we lived together with other German families and they had started a firework in the garden, the Belgian neighbors were afraid and called the firemen ! What a memory ! Over the years fireworks on New Year also became a use in Belgium and now at midnight besides the official firework in each town families also have their own firework. In Germany the total costs for fireworks in 2012 had been 113 Million Euro (153 million $) !

In the first years of our marriage I tried to keep up with the Bleigiessen tradition and our friends were enthusiastic but then with the arrival of a baby we had less time to go to Germany and buy Bleigiessen sets. This year we will celebrate with all our friends at Dominique's and I found a Bleigiessen set on Internet ! I immediately bought 4 boxes ! And on New Year's Eve we will look into our future !

A very interesting tradition I have never heard of. Here the midnight fireworks seem to be bigger every year. And better? not sure as I like the family fireworks at 9pm better.

I have never heard of that tradition but I love the sound of it. What fun. It is strange that traditions develop in local areas rather than countrywide . When I first moved to London a long time ago I assumed that all the neighbours would come out into the street at midnight on New year's Eve and have a drink together as had always happened in Manchester. As I emerged out of the house with some friends I noticed the neighbours turned off the lights and remained in their own homes.

How interesting, moro so...it amazing to know traditions that I never heard of.
Thank you for sharing.

I dind't know about this but it looks fun and interesting. Please tell us what you find out about your future when the time come.

Bleigiessen sounds intriguing, like tealeaf reading perhaps? does it really work? I guess it's all how we see things.

have a great day.

That's a tradition I never heard of! It sounds like good fun though.

Didn't know this tradition!!! Sounds you will have a marvelous moment at Dominique!

Good luck with your fortune telling. It sounds like so much fun.

Interesting tradition! Thanks for showing it to us!

Traditions are important! Glad you caught back up with this one…

How interesting -- I'd never heard of this before. I hope your future will be bright!

What a neat tradition!

I've never heard of this...

And I'm not quite sure how to pronounce it properly...

But this was a beautiful post for the letter "B" filled with bounteous information!