When we did our UK tour, I had booked a room in a Hostel. For two persons there was a room with bunk beds, and a shower. It was so small that we had to undress and dress one by one, while the other sat on the bed (or in the bathroom)

For one night it was OK and it was very close to our departure point the next morning at 6.30 am. I had never slept in a bunk bed in my life and of course wanted to try out the upper "floor". I thought with my forthcoming 70 years old bones I'll give it a try. 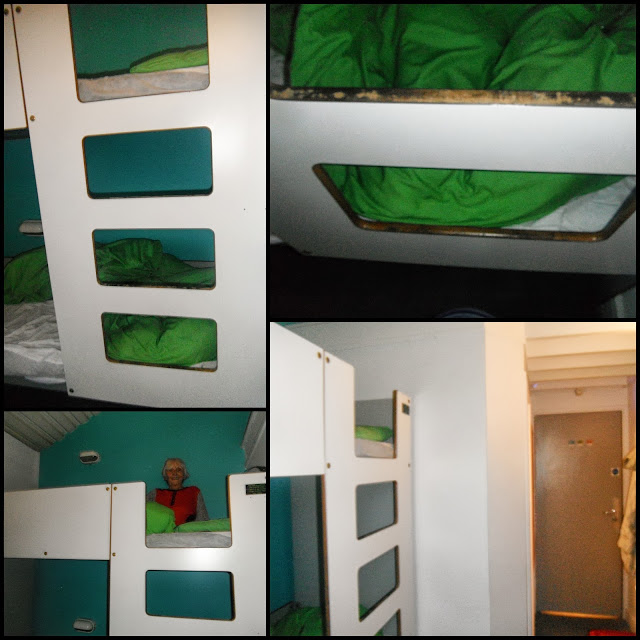 There was no ladder at the bunk bed, but only holes cut out to get into the upper bed. It hurt like hell the naked feet which made the climbing rather painful. Finally I managed and settled down happily on my "second floor" overlooking the landscape which was a naked wall and some hangers, but a little table with a kettle and no coffee.  But then I thought if I have to get up during the night, how do I get down  ? Of course there was no light at the beds, only one string to lighten up the whole room.

Ilona worried about me and was afraid that I would fall not on her head but on the floor if ever mother nature calls me into the bathroom. As she is half a head smaller than I and has a very small frame, she suggested to swap and I climbed down and felt like an elephant. She instead climbed up as quick as a monkey and armed with one pocket lamp each, we finally settled down and fell asleep. Besides the fact that each time she moved a toe I had the feeling to sleep in a boat on an agitated sea.  The whole bed shook.

But it was fun and an adventure and I like to do things which I have never done ! It's never too late !

The Furries of Whisppy said...

Ohhhhh. My brother and I slept on bunk beds when we were kids. He got the upper floor while I had to settle for the lower bunk.
When we were older, our dad sawed the bunk bed and my brother got "his" upper bunk and me, the lower bunk which we slept on right till we were adults. The beds are STILL at our parents house. LOL.

Hi Gattina .. they are making all the use of the space they can manage aren't they .. well I'm delighted you had the experience of bunk beds - they do look more suitable for very littlies!

We used to use the night train to Cornwall occasionally .. and that had bunk beds .. I must say I always slept well - but was glad to arrive at Paddington!!

My partner slept in the top bunk on a ferry from Amsterdam and could not get down in the morning without help.

I slept on a bottom bunk at a school camp and when I woke I thought I had wet the bed, but it was the boy above me and it seeped through his mattress. Yuk.

Hi there - Hostels can be a bit of a trial at times - I did a lot of youth hostels as a teenager /20 something - but I dont really want to start again!

Although it may be a bit more fun with kids!!!

Ouch! Ouch! Well done for taking on a new experience, albeit briefly;-)

New adventures every time! Luckely you could sleep with Illona! I imagine the last night you appreciated your bed!

I still can't believe you slept in bunk beds. It makes me laugh everytime I think about it.

I had to sleep in a bunk bed once on a church weekend trip away. I felt like I was on a boat. No good for the over 25s!!

I slept in a bunk bed in a hostel in Switzerland. I got to stay on top and I loved it. My son experienced his first bunk bed last summer in Cornwall. Of course, he had to stay on top too!

I like to sleep on the lower part of a bunk bed but I always worry about
the guy on top peeing on my head while I sleep.
I always had this feeling so never got bunk beds for my kids. lol

Bunk beds are fun but not when nature calls in the middle of the night as nature is sure to when she knows you must struggle to get down from a top bunk.

You didn't go with Mr. G? and decide you both sleep in one bed.LOL, when my son was 10, he couldn't wait to have a bunk bed. We got a mental one. When he was 14, he didn't want to sleep on the upper bunk. He slept on the lower bunk. When he was 15, he pulled the mattress and slept on the floor.

Once, we had visitors, my uncle and uncle, I gave them my bed, ( my husband was overseas) I slept under my son, each time he moved, the bed creaked.

LOL! We had bunks one time on a railroad journey ...you can imagine how that felt.

I've enjoyed catching up on all your posts; it was hard to read while we were on our roadtrip....