1. After my rather busy weekend where I took lots of pictures of the soldiers in their historical costumes they wore in 1815 during the battle of Waterloo, I spent most of the day by sorting them out. As usual the weather was lousy, grey, cold, and wet ! The global warming became the global cooling !

2. Once a week I do my food shopping. This time I bought something I didn't even know that you can buy it deepfreezed ! 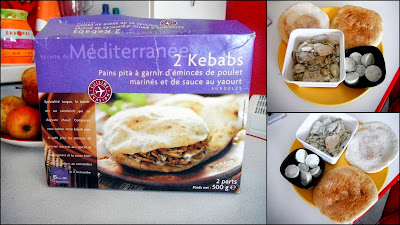 Pitas ! I just had to heat up the meat, and put the pitas in the toaster and it was done ! Delicious ! 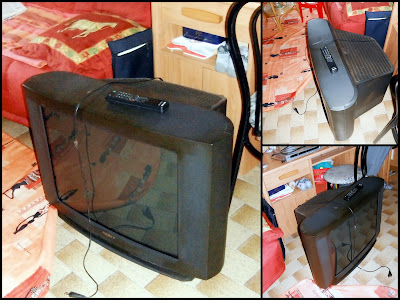 We still had this old (or rather not that old) TV in our guest room ! Compared to the once today it looks like a monster. But it still works perfectly. We finally replaced it by the TV standing in Mr. G's room which he never used because the connection was so bad. We gave the old one to our young Moroccan gardener who was only too happy to give it to his brother in Morocco, where  on the countryside, TV's are not for everybody, and especially not the flat models. So we were happy to get rid of this monster which over here nobody wants anymore, and make someone else happy who can use it. We also gave him our old DVD player, which he took for his parents. Things which are so "normal" for us in our spoiled society, can be so precious in other countries where people are still living in another century. They only have electricity since 4 years ! 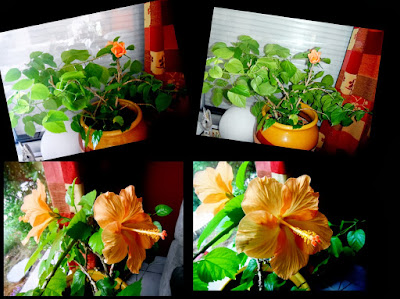 The Hibiscus plant I have now for a year, suddenly decided to bloom and it looked wonderful ! 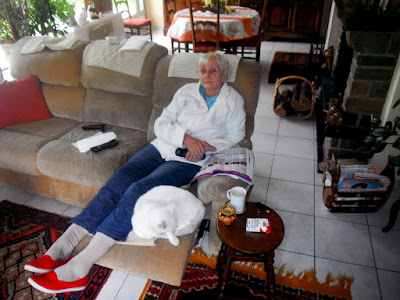 As you can see I am really dressed up for "summer", I had to put the heating on, and to match with Arthur's fur wore a warm fleece cardigan.

5.  During our painting lesson we had a big discussion about the extramarital daughter of our king who is now 45 years old and wants to do a DNA test to prove that she is King Albert's daughter. As the King enjoys complete immunity under the law, she now decided to summon his elder children ! A few of us thought she has the right to know her "father" the others (including me) were more convinced that she wants part of the heritage in case he dies. Illegitimate children in Belgium have the same rights than the marital children. The royals don't move and the newspapers have something to write !

In the afternoon I went to Ilona's mother to show her the pictures of our UK tour. She was delighted and regretted that she hadn't done the same trip ! She is 88 and is still in a super shape !
Posted by Gattina at 06:00

Well this is a full post I agree illegitimate children have a right to know. The weather is horrible I am dressed like you lol
I have old TV sets. They dont get high definition but otherwise work well with cable.
Sometimes frozen food tastes great
They make it better and better.
xoxoxoxo

You are dressed the same as me in winter. It must feel good to be able to give something to someone who appreciates it.

It turned cool over here too. We needed the rain but I wouldn't mind the sunshine back now!

Your Hibiscus is lovely - I took some photos of them when I was in Florida. My sister has one in her house. I'd love to try to grow one too.

How nice that you could give your tv and dvd away to someone who is so happy to have it. Hard to believe they've only had electricity for 4 years!

Hope you get some sunshine this weekend!

Love your plant!!!! so pretty!!! I hope you enjoy a warm sunny weekend!

I just love it when my plants bloom! I have moved quite a bit in the past 3 years so I don't have any indoor blooming plants right now. But, I will pick up a Christmas cactus and it will bloom every year. Also, when the season changes I will bring my geraniums indoors and they will rebloom. I hope your weather warms up. It's no fun to have to stay indoors.

The hibiscus is very pretty!

It is funny how TVs and such have gotten so much smaller. I'm glad you found a good use for your old one. It's hard to imagine a country that has only had electricity for four years.

I am glad you could recycle some of your old electronics. I had to see older electronics just dumped at the local dump. There are charities which will take them, repair them and distribute them to people who cannot afford new. We are such a wasteful society.

A nice cosy week at home. You must be pleased to have a rest after all your travelling.

I hope the weather changes soon.

The hibiscus is a gorgeous color! It's finally starting to warm up around here. I had the sweaters out a couple weeks ago too.

We had a tv like that we didn't need anymore either. We couldn't give it away to save our lives. Even the second hand stores and food bank second hand store wouldn't take it. They said flat screens only. So we had to recycle it though it worked perfectly. I thought what a spoiled society we are and that someone in another country would have been really happy to have a working tv whether it was flat screen or not.

We still have a small TV like that one, too. Our kids have it hooked up to a DVD player out in our sunroom. Your hibiscus is lovely. We have several of them in our yard.

Sounds like the weather has been contrary in both parts of the world. You are putting on layers and I am taking them off. It's supposed to be 106 degrees F today.

How fortunate to have your plant bloom. The colour is striking!