Helps you to remember what you have done on the weekend of June 22 . If you participate please put the little logo on the top of your post and leave your link.

This was a quiet busy weekend ! There was the 14th camps and parades of 600 Wellington and Napoleon soldiers in Wateloo to celebrate the battle of 1815. Wellington's camp was built where it had been in 1815, in front of an old farm. There were a lot of British tourists there and I almost thought I was in England ! 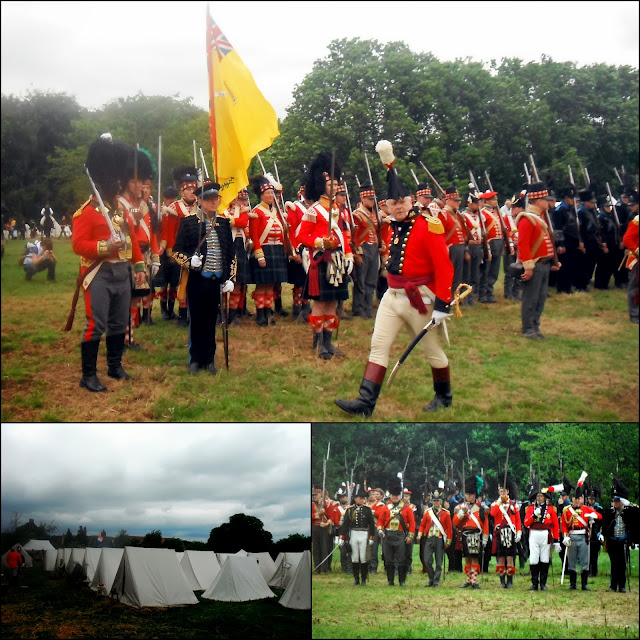 Of course I had to go there and admire Wellington's soldiers and his alleys. They all lived in these white
tents for 3 days ! I sneaked into the "village" and took my pictures together with heavily "armed" professional photographers and the TV of course. When I had finished and went out I saw I had to pay an entrance fee of 5 € ! But nobody had noticed me. So I couldn't pay for going out of course. It was a wonderful show and I will write about that later.  Unfortunately the weather was very humid and it also was rather cold.

In the afternoon I went to Ilona, she did some delicate sewing for me on a blouse, she had worked as a fashion tailor before she married and she can do absolutely great dresses or everything you want. But now she hates doing it, only for friends she makes an exception. We chatted about our UK trip and family happenings and then I returned home to download my battle field pictures. 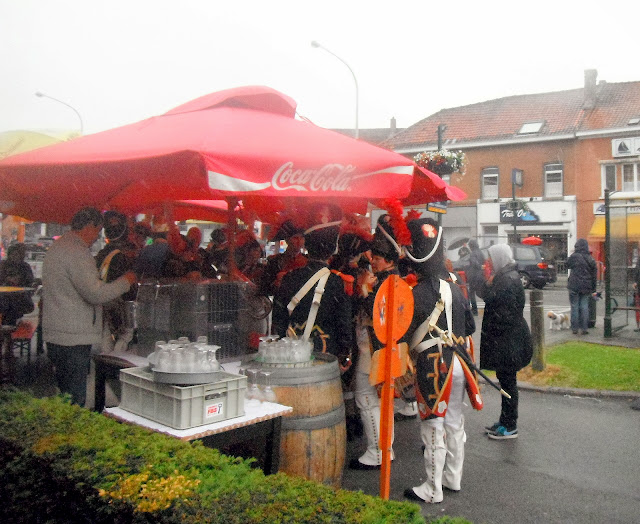 On Sunday morning the parade of all the soldiers should take place at 10.30. I went there, and there were only the Frenchs arriving stopped and waited for the others. To protect themselves against the rain, they had a beer at the little tents to warm up ! It started raining more and more so that I thought I better leave not to catch a cold again ! 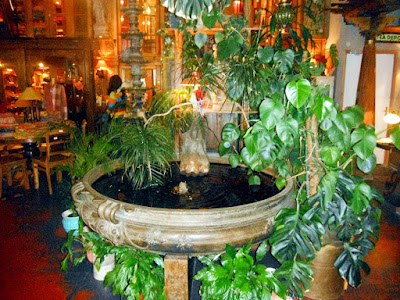 As it was a bit early to go to the midi market I spent a little time in my Indian shop to rest and have a cup of tea. It is really a haven of peace.

On my way back from the market I met an American history teacher in the train who went to Waterloo for the battle. The poor man didn't know that the Waterloo station is quiet far from the Wellington museum, and the bus from the station to the city center doesn't work during weekends ! What a crazy thing. So I drove the poor man to the center and showed him where he had to go. He came from Boston and taught European history.

After that I was quiet exhausted and spent the rest of the day with my photos on the computer !
Posted by Gattina at 06:00

Hi Gattina .. what a pity about the weather .. not much different here!

So kind of you to drive the professor to town to the Museum .. he must have been very grateful ..

The 18th June, the date of the Battle of Waterloo is my daughter's birthday. Of course she wasn't born then.
I can see soldiers in kilts...siiigh.
Lucky you were able to help the American find the battle ground.

That is one battle I would love to see. :P

You are so kind to drive the man to his destination.

Hope you'll have nicer weather soon. My ex-boyfriend used to participate in Napoleonic events. Sometimes they have them here too because the French were here for 2 years. But nothing major like Waterloo, of course.

The soilider drank coffee at a coca cola tent. I would like to watch them one day, may be I will be able to get in for free too.

Not bad to have a cola to refresh after some harsh battles! :)
God bless you!
Cezar