1. After having decided not to blog every day and make a break, because I had ran out of writer's cramps, now suddenly they came back !

I got very sad news to start the week, my friend Ilona's mother aged 93 after having celebrated mother's day with champagne, got a stroke during the night and on her wish was euthanized surrounded by the whole family 4 days later because she would have stayed completely paralayzed. She had made a will years ago to put an end to her life if ever this would happened despite the fact that she was very religious.  She was an amazing women still lived in her apartment, did her shopping and everything alone and at the age of 85 went to Israel, Jordan and Egypt !! She had nothing at all and walked like a young girl. She was my example how to age nicely. 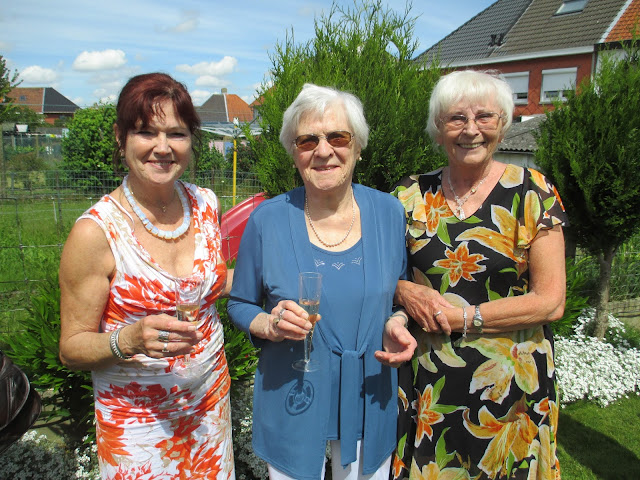 Here I am with Ilona and her mother on her 90th birthday ! She had never been sick in her whole life which began in a very poor family and she had to work very hard from 13 years on !

Euthanasia is allowed in Belgium if you are very ill and there is nothing to do anymore and you have filled in a special demand. That's what she had done

2. Our Facebook "Vivre à Waterloo" (living in Waterloo) had its monthly meeting in the Jollywood restaurant. 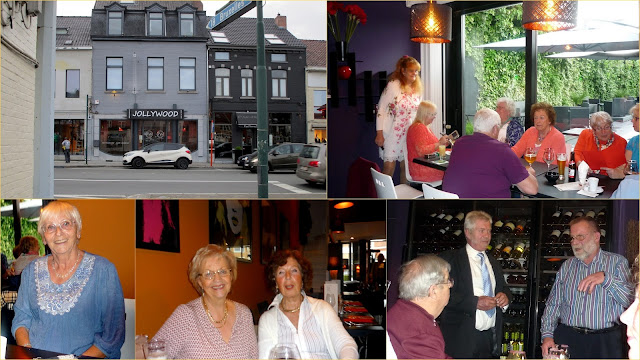 Nicole and another friend came with me. We were about 40 the man right below in the striped shirt is the founder of the group which meanwhile counts about 3000 members. We not only had a drink but we also had a little supper there. It's so nice to know people life and not only virtually.

3. The most unwelcome visitor in Belgian history unfortunately dared to visit the hell hole Brussels ! We all admired that he was so "courageous" and play with his life ! Unfortunately he survived at least so far. 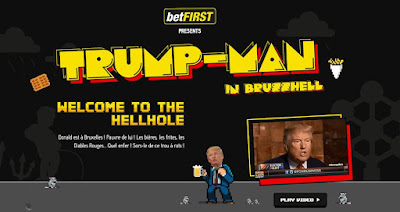 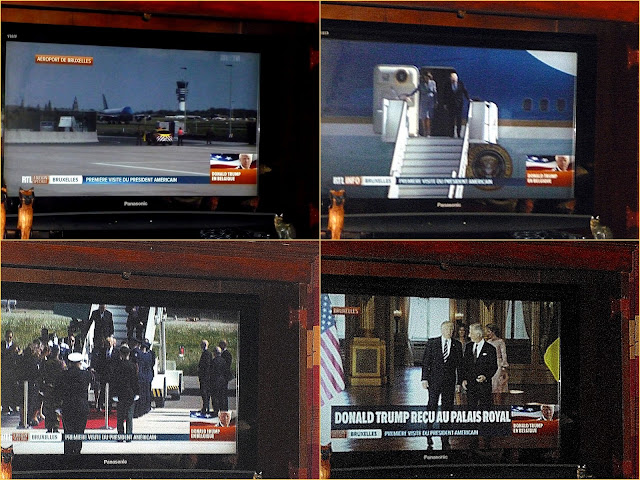 To the anger of all people the streets were he drove through were closed, it was a traffic mess in Brussels and it was good that he was so protected that you couldn't even throw rotten tomatoes at him. Protesters against his visit were on the streets, what a difference to when Obama came to Brussels ! 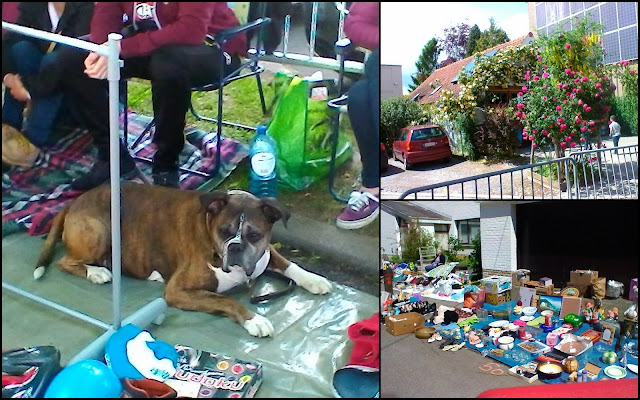 There was a flea market in Waterloo and I had a look if there was something interesting to buy, but besides this cute dog who wasn't for sale I found nothing met nobody and finally went home.

5. So far I had always refused to buy a smartphone and was with my traditional little old Samsung mobile. But then it became more and more evident that sooner or later I had to buy one, because now they started also that you can pay with your smartphone and a lot of other things. I did a market study on internet and finally bought the Samsung Galaxy J5 and ever since am busy to install all what I need. It's only the second day I have it and with some functions I am still in war !

Dear Gattina - sorry to read about Ilona's mother but she has done incredibly well to reach 93. Lovely photo of the three of you ... all the best - Hilary

Lol at Trumpet's welcome. Once you are used to the smart phone, you will wonder how you managed without it.

Although it is very sad about your friend's mum I think she was a very brave lady and would not have enjoyed life being dependent on others. I wish it was more accepted here in the UK that being alive isn't necessarily the most important thing - being able to enjoy life is more important. Thinking of you and your friend.

Well, she lived a long life. Our former President Mauno Koivisto was buried yesterday, he passed away also at 93 years. That's life.

Your friend's mother certainly looked so healthy and beautiful and definitely not as if she was 90 in the photo you shared. So sorry to hear of her passing, but as you said, she was a role model for living a very long life. May she rest in peace. I laughed out loud about Trump's visit -- you voice my feelings of him exactly. I've had a smartphone for 4 years now and love it. Like you, I resisted for quite awhile, but one day my husband showed up with a new iPhone for me and I'm so glad he did. Have fun with yours!

Good luck with the phone, I hope if goes smoothly. Sorry to hear you'd friend has died, it sounds like she made the most of life though.

So sorry about your friend'a mother. She sure did not look that old. Most people share your feelings about Trump.

I'm sorry about your friend's mother. How nice that she could go peacefully. I don't think we'll ever be allowed to do that here.

I'm very sad about our current President. I thought I had seen a lot of hate during desegregation, but I believe there is more now. We have a free press and he's trying to control them by claiming "fake news" whenever he doesn't like what they say. I believe some are becoming disillusioned, but not his die hard followers. Next time can you keep him a while longer?

It's so good that your writers cramps didn't stay! I like that you're BACK. Sorry about your friend, Illona''s mom. She was a wonderful lady and made the most of her life. You will enjoy your Smartphone once you get the hang of it (which won't be long if I know you!) and then you'll wonder how you ever managed without it. Have a great weekend. xx

I'm sad for Ilona and you, that her mum, your friend, has died - and yet I can't help but think that's the way I'd like to go - a good, active life and then a sudden catastrophic event. I wish we were allowed to specify euthanasia in such a situation but we aren't and it doesn't look likely to change. I should hate to be stuck in limbo with no chance of improvement, and it's very hard for families.

Good luck with your new phone. Once mastered, they're great.

So sorry to hear about your friends Mum, sadly euthanasia is not really an available option here in the UK. Good luck with your new phone.

I am so sorry for your loss of your friend's mother. Your comment about not even being able to throw rotten tomatoes at our current leader gave me a bit of a chuckle. Good luck with your Smartphone, I am lucky to have a teenager in the house to help with mine ;) Hope you have a good weekend!

So far I have resisted getting a smart phone. I sometimes do wonder, but so far I am happy with that.

Sorry to hear about your friend's mother. Condolences to Ilona and of course to you too.

I don't have a smartphone either. We have very poor service in my area and I don't feel the need to have something that I would be using so rarely.

My condolences to you and your friend :(

I hope you can stop by:

Sorry to hear about your friend. Upsetting I'm sure but she had a long life and it sounds as if her death was peaceful and as she would have wanted it.

I'm sorry to hear about your friend Ilona's mom. Sounds like she was such a remarkable lady.
I didn't think I would need smartphone until I got one. Hope you get used to it quickly :-)

I send you my condolences on the death of your friend's mother, she sounds like an inspirational woman. I was interested to read that euthanasia is legal in Belgium as we don't seem to be able to have a proper discussion about it here in the UK. I have had a Samsung Galaxy J5 for almost two months now and what I really love about it is the large screen and the camera, which takes really good photos. x

Sorry for your loss of what sounds like a very inspiring lady. Have fun with your new phone. You seem to catch onto technology quickly and I'm sure you'll wonder what took you so long to get one.

I am sorry to hear of your friend's mother's passing.
Too bad that cute dog wasn't for sale!

Sad news about Ilona's mother but she seemed to have lived life to the full and to be able to decide on when you want to end your own life must be a comforting thought.