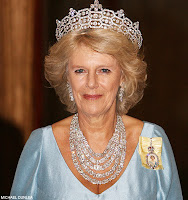 Queen out-dazzled by Camilla the diamond duchess in Commonwealth visit
The Duchess of Cornwall out-dazzled even the Queen last night in one of the most opulent royal necklaces and tiaras ever seen.Comprised of five strands of diamonds, it covered her entire decolletage and made the Queen's jewels look quite modest. Now that is the outmost !! She had my necklace copied in real diamonds !! The crown I have put away it is a little combersome when I do my shopping ! but I have to admit that her decolletage looks much better when it is covered.

Camilla and Charles become king and queen of the NileAfter visiting charity projects in Kampala, the royal guests took a trip down the mighty river, where Camilla captured the dramatic scenery with a digital camera. And here again she copied me !! I was there at the same time, looking for unexisting crocodiles. Fortunately we didn't meet she could have been able to wear the same clothes as I did ! 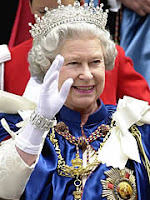 A first call coffin for Queen Elizabeth
Queen Elizabeth II's undertakers always keep a special coffin ready in case a member of the royal family dies suddenly abroad. Leverton & Sons, a 200-year-old frim which was made royal undertakers describe the caslet as "first call coffin" in case of emergencies. The coffin's design meant it was airtight, added Leverton. That's a good idea ! I have to put this on my travel list for the next trip, I don't have an undertaker. Do you think they have foldable coffins ? Otherwise I could get into troubles when I check in. I am not a queen. 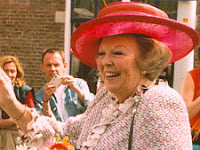 Queen Beatrix of the Netherlands unhappy about a new book
Queen Beatrix is unhappy about a new book on her ancestors Willem I, II and III.The book, includes mention of Willem II's bisexuality, Willem III's boorishness and describes Willem I as grasping and pigheaded. I think she has nothing from Willem II but the two others ?? That's maybe why she got angry, nobody likes to hear the truth.

Boxing helps Hugh Laurie cope with the House work
At 48, it takes a lot of work to hang on to your reputation as television's sexiest man. Hugh Laurie, unlikely heartthrob and star of US TV series House, has resorted to boxing to keep fit. What ?? the sexiest man of TV ?? Oh God what has the world become !

Matt Damon
and this one apparently is also the sexiest man ! I am so happy that men when I was 20 were at least handsome. It's like food, if a dish looks beautiful the taste is much better. I sincerely hope that he too hasn't joined the range of the sexiest man ! I so much wish I could see the jury ! It must be composed by very frustrated women !

Boris Becker celebrates milestone birthday with ex-partners
Former Wimbledon champion Boris Becker showed it is possible to break up with a lover and still be friends as two of his former partners helped him celebrate his 40th birthday this week. Only two ?? That's not a lot ! According to newspapers he was seen with some more, but maybe it was only "seen".

Vatican
A special mass is held in the Vatican to celebrate 23 newly appointed cardinals, who will act as the Pope's principal advisers. Look at these young man ! I wonder why they are not amongst the sexiest men ! The youngest one must have at least 80 ! Poor, poor catholic church !

Germany A crowd of geese in an open-air enclosure on a farm in Kuhhorst, eastern Germany, 5 November 2007. Most will end up as roasts for the traditional St Martin's Day festival. The poor things, they look much nicer unroasted. I think I will become vegetarian. 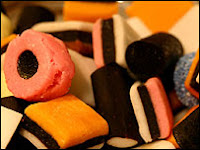 A grandmother has agreed not to bring the children sweets anymore. She has been banned from giving sweets to her grandchildren after a court heard they had suffered dental problems.
The grandmother, known as EM, launched a legal battle against her own daughter over access to the four children. .................................. (big blank, I am speachless (for once), Mr. Gattino will be happy !) 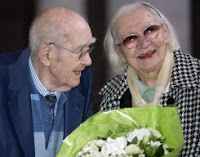 France
A 96 year old cook and a 88 year old baker married at Clermont-Ferrand (France). Both answered with a clear "yes" to the famous question. Margueritte had already been married and has a son of 64. Maurice had never married. I did it for her he said, I should have done it long before, I hope she will be happy and Marguerite added "I am very happy". How lucky this guy, he even inherited a 64 years old son ! You see it's never too late.
Posted by Gattina at 07:10

Boris B could host a large party just by inviting all his "ex", lol!! You missed Lothar Matteus (46) breaking up his 3rd marriage for a 20 yo...Oh, boy! But your last piece of news says it all: it's never too late!

Hi Gattina I love your news tid bits.It looks like Camilla has lost weight, is it caused through the weight of the diamonds odorning her..
poor Grandma not allowed to give the kids sweet...
The baker and the cook its never to later and now he has a son...

Your geese news is so similar to the huge pens of turkeys that are shown here before the holidays get started with Thanksgiving. Turkey is our bird of choice for big holiday feasts.

Thanks for stopping by my blog.

But yours will be added...I still have to go through some more comments too.

I think I must be royalty! Hats and Tiaras! Whoooo hooo! Those Cardinals are certainly no Richard Chamberlains, huh? But if the Catholic church doesn't start allowing their priests to marry... the next Cardinals installed might be 100 yrs young!!!

Awww c'mon! Hugh Laurie is sweet! I really enjoy his portrayal of the snarky doc on House.

How rude of Camilla to copy you like that! Shocking!

Hello Gattina ~~Great post and I liked the news too. I thought Camilla
looked top heavy and not very nice.
I like Matt Damon but Hugh Laurie is a pain, in my opiion, so rude to everyone. Thanks for your comments
about the Fluffy Duck Gwen brought for me ~ I have a house full of stuffed animals!!! Glad we Aussie
bloggers cheer you with pictures and stories of warmth - when you are so cold. Take care my friend, Love, Merle.

I love your xmas decor Gattina.

That is so sweet about the couple! Cheers to them! :-D

Camilla's looking a bit rough there I think!n The Queen looks better!