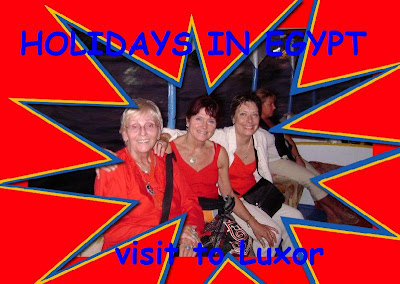 Today is the first Advent and as usual we will light the first candle. 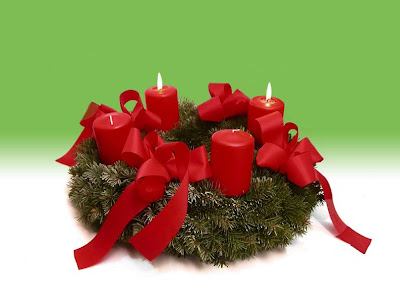 This is a typical classic advent wreath. 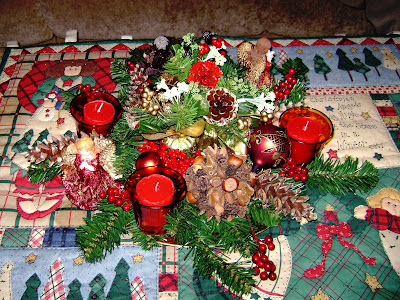 and this is mine today.

Since a few years I don't buy a wreath anymore, I just put fir branches on a golden plate and decorate them. The table cloth I have got years ago from my American aunt. Above in my header you can see my advent "wreath" from two years ago. Last year I didn't do anything because we went on holidays.

And this is the story why the advent wreath has become a custom during Christmas time.

The Advent wreath (Adventskranz), was invented by a certain Johanes Hinrich Wichern in Germany and is relatively modern. He was a protestant minister and was running an orphanage in 19th century Hamburg. To contain the children’s excitement who asked him every day when the "Christkind" (Christ child, or Baby Jesus) is coming, (in Germany there is no Father Christmas and the gifts are brought by Baby Jesus), he created a wreath which held 28 candles, four “Sunday” ones taller than the rest. With each passing day, another candle would be lit, until the whole wreath shone on Christmas. Then it was changed into only four candles for each Sunday one candle before Christmas eve. That way the children knew when the last candle burns Christmas is there.

The smaller candles were replaced later by a Advent calendar. The first one appeared in 1904 and was commercialized from 1920 on.

The traditional calendar consists of two pieces of cardboard on top of each other. Twenty four doors are cut out in the top layer, with one door being opened every day, from December 1 to December 24 (Christmas Eve). Each compartment can either show a part of the Nativity story and the birth of Jesus, or can simply display a piece of paraphernalia to do with Christmas (e.g. Bells, holly). Advent Calendars can also consist of cloth sheets with small pockets to be filled with candy or other small items. 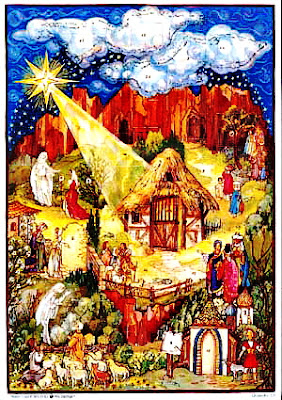 These were the kind of calendars I used to have during my childhood.

When my son was a child it was very hard for me to get such a calendar because they didn't exist in Belgium. Therefore we went to Germany to Aachen which is not far at all (only 150 km, 93 miles) and bought all things we needed to celebrate Christmas time as I was used to in my childhood.

The fact that only one door was allowed to be opened each day, increased the day-by-day suspense. 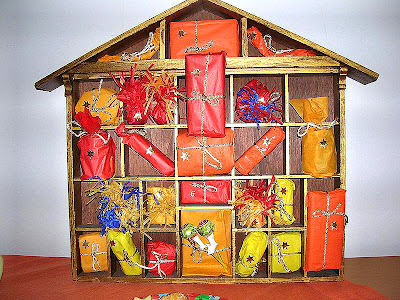 Today there are a lot of different Advent calendars on the market, containing chocolate or even little presents.

I was very surprised that I even found them ONLINE !! So I wouldn't be surprised if my grandchild will use internet to open its advent calendar.

Here is one I liked the most because everyday it tells you about Christmas customs in a different countries.

Advent calendar
Posted by Gattina at 16:57

What an interesting post! I learnt about the different traditions, food and things people do for Christmas in different countries.

I don't celebrate Christmas in Singapore. I do attend church services that day.

Christmas gets commercialised in Singapore. Shopping centres and eateries are enticing people to spend on Christmas items without knowing the true meaning behind the occasion.

Coming from a German background I was raised with both the Advent wreath and the Advent Calendars. Oh, I do miss my Papa and all of his brothers and sisters.

Interesting post Gattina! I didn't know advent calendar was created in Germany. I have bought one for my class and pupils are very exiting now waiting to open each day a little door! love the pic of the old advent christmas. This calendar came in France just a few years ago.

What a glorious post...I bet your home is so festive right now!!!

That's an interesting story of the Advent wreath, Gattina.

We have Advent calendars here and they contain little chocolates. The kids get excited because they know Christmas isn't so far away...and they can have a chocolate each day!

A wonderful tradition. I have some friends who do this...and I had no idea where it originated.

Ohhhhhh YES! We have always had advent calendars! Some with chocolat and some with just pictures -- but always sOMething! I got one for Luz this year that has 24 drawers to pull out. Inside the drawer is a piece of candy. Then you put the drawer back IN backwards and it creates a nativity scene by Christmas Day! It's really cute!

Ooooooops! That Krysti up top is MELLI! I'm logged in trying to make HER a blog! LOL!

What a great post, Gattina, it deserves more publicity to spread the word around.
"Die Welt" has an Adventkalender with 3 questions each day to win great prizes!! Had to google all questions until now but nobody said it isn't allowed, lol!

Hi Gattina, Very interesting story on the advent wreath and Calender.
I have just bought Advent calenders for 3 of my granchildren who live near bye, and have done this for a few years, they ask me the other day if i had them this year and I said there home in the fridge as there got little chocolates in each window...