STUCK IN A CAR WASH TUNNEL 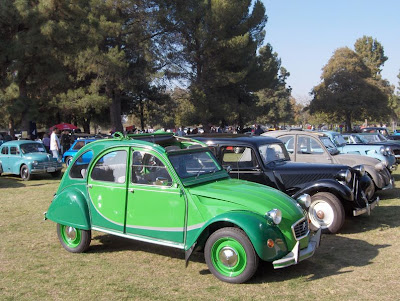 Of all cars I owned during the years my favorite one is and was the 2CV ! It was a very special car. People called it "duck" and I had a green one on which I had glued 2 big yellow ducks on each door it looked very funny and I couldn't drive icognito of course.

The car had a very thin steel shell and a canvas sunroof. The steel was so thin that you could get the impression if you looked hard at the car it would make a hole. The gear shifter too was very special, it came horizontally out of the dashboard with the handle curved upwards. It had a strange shift pattern: the first was back on the left, the second and third were inline, and the fourth could be engaged only by turning the lever to the right from the third. Once you knew this it was very easy to drive.

The wipers' speed was variable with car speed. When the car was waiting at a crossroad, the wipers were not powered; but a handle under the speedometer allowed to power them by hand. This car could go everywhere it was like a jeep, in clogs and across muddy unpaved roads etc. 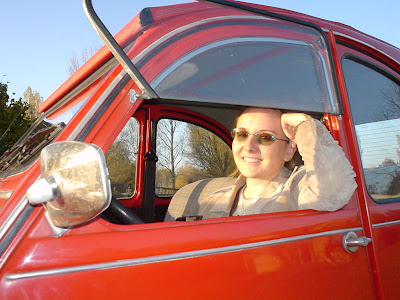 One sunny day I found my car dirty and decided to go through an automatic car wash. I thought my car is just like others. But when I was in the tunnel I realized it wasn't quite the same. I was sitting in a thunderstorm ! The rolling brushes made an awful noice on the canvas roof and on either side it was not better. I thought in a few minutes it will be my end and I will be brushed to death.

The slow moving of the rails seemed to last an eternity. And then, suddenly the car stopped, it didn't move at all anymore while the brushes continued over my car with a terrible big noise. I got a little worried and honked once. Still nothing I honked more and more, nothing. Now I wanted to get out of here but how ? I tried to use the manual wipers but the brushes hindered it. I could hardly see anything because it was quite dark and water was running over all windows. I thought the roof will break.

Suddenly the noise stopped and the brushes stopped too. Now their plastic fringes were hanging all over the car. A deadly silence after this rolling thunderstorm. Suddenly I saw a white face through the fringes with it's nose pressed against the side window and glowing eyes starring at me. I leant back startled and then I heard a voice "ça va Madame ?" (everything OK madame ?) and pushed a sigh of relief it was over ! 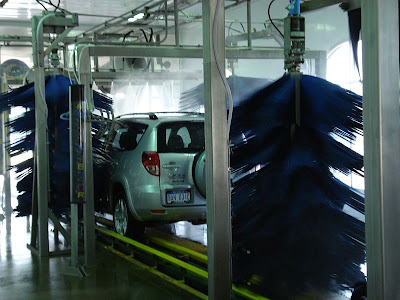 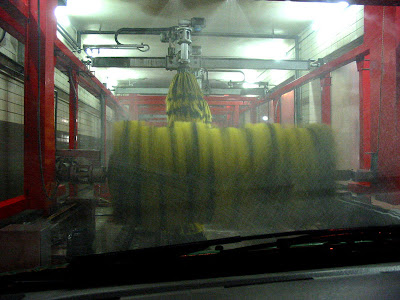 This was my prison !

Two men pushed the car with me outside in the sunshine, I climbed out and have to admit my legs felt like butter. But one thing is sure, my car has never been so clean than this day ! 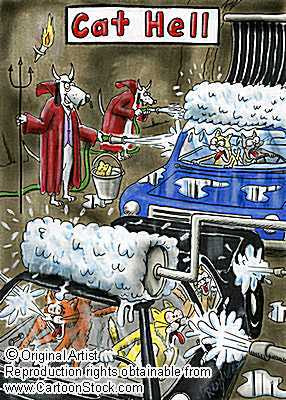