more Urban Legends are on our Captain Mrs. Lifecruiser blog. 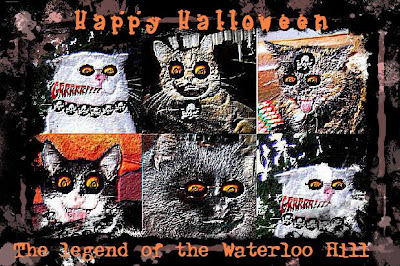 I live on an ancient battle field. The Waterloo battle where Napoleon fought against the English, Scotts, Prussians and Dutchs etc. and lost. A memorial in the form of a statue of a lion (looking towards France) had been built on a hill in Waterloo from 1823 until 1826 with the remaining arms left on the field, such as swords, canons etc. It has 226 stairs and is called La Butte du Lion. It is said that it is the exact point where the Prince of Orange (Netherlands) was wounded.

It is probably true that the remaining rests of arms are burried under the hill but a legend says it was also built with bones and skulls of the fallen soldiers which were collected by women put in baskets which they carried on their backs and put all together to form the hill. Then it was covered with grass and today it looks like on the picture below.

When it is midnight and the moon is shining (which doesn't happen very often due to the always cloudy sky) you can hear the wounded soldiers moaning.

Miles around the Lion Hill farmers still find bones, skulls or arms from the battle. Some residents find them in their gardens. When we moved to Waterloo I hoped to find some battle left overs in our garden. Unfortunately we did'nt find anything not even an animal skeleton. 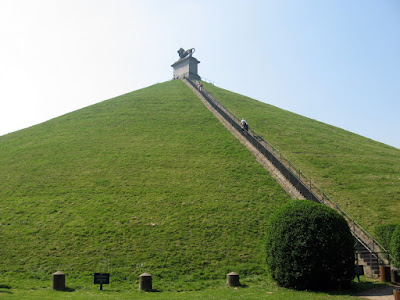 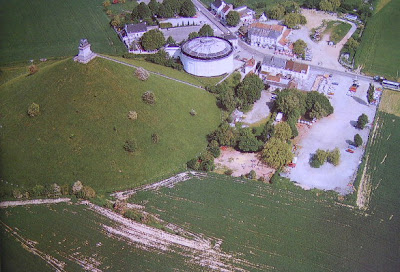 The hill and the whole touristic area

I will wear my earplugs if I ever visit that place at midnight...
If you had a dog maybe he could find a bone for you :)

Super post! I'd like to visit this field in a full moon night! Today we fest Mélissa birthday! 20 persons for the lunch! See us later!

I knew you where living at historical ground and this was an interesting read about an important part of Europe's history - thanks for sharing.
I want to go there one day and hope you'll guide me :-)

I saw your comments at Tor's and that you where surplices we had Halloween in Norway. Please check my post to see a bit of the back ground.

Ah, the famous lion hill yes! A must visit if I ever come to Waterloo :-)

It's beautiful in day light, maybe too scary in the night though.... I'm quite sure it would give me severe goose bumps!!!! *giggles*

Ah, me too would have wanted to find some bones or other "nice" findings if I were you!

Maybe it's not too late - you have to dig up the whole garden! Mr Gattino need something to do, doesn't he? *giggles*

Boy, oh boy!! Gattina, this is just right up my hubby's interests. He knows I know that you're living in Waterloo. He would give his eye teeth to come visit and see all things Napoleon!!

This was a fantastic venture into the legend. You did good.

"Who was the most famous French skeleton? A. Napoleon bone-apart!"

Hmmm... maybe when they say it was built with the leftover arms they meant lefts and rights -- not weapons! ??? Interesting story!

Just proves how brief our moments on earth are. And yet the land remains and the stories live on.

What kind of stories will you and I leave behind? I hope people hear me singing.

You should keep digging all yards
including backyards maybe you could find soldier's bone one day. great story!

Wow! To live on a historical ground is cool! But I wouldn't want to hear the moaning of the soldiers nor dig up any of their bones while gardening!