MY CAT AT THE VET 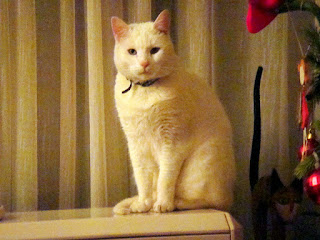 Mr. G's childhood dream was to own a white cat. So getting his dream come true, we went to an animal rescue center and while asking for white cats, somebody showed up with a carton and sitting in there was little 6 months old Arthur.

Of course we filled in all the requested documents and took baby Arthur home. We quickly noticed that Arthur was a very special cat.

I could write a whole book about his adventures but today I just tell you one for the the One liner Wednesday prompt. Meanwhile Arthur is not a baby anymore but a grandpa of 18 years old. 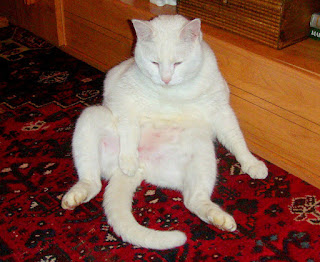 One day, I was in the kitchen when Arthur suddenly appeared on three legs. The left front paw he held up and when I saw it I got a shock. The leg and the paw were full of blood and on his white fur that looked even more dramatic ! I carefully picked him up,  put him on the table to have a closer look. Fortunately only the paw was bleeding the leg was only full of blood. But the worst thing was, one claw was nearly hanging out and crooked. I left Arthur on the table, picked up the phone and called the vet. Fortunately she was in and had her consulting hours. I described what happened and she told me to come over right away and that she would take me before the others, as this was an emergency.

I got the carrier and carefully put a slightly reluctant Arthur in. He didn't like the cage, but sat down. At the next street, Arthur started his free concert. He sang with full heart in his awful Siamese voice and didn't listen to my prayers to stop it. And that lasted the whole way through until we arrived.

When I got out of the car I was close to a nervous break down.

In the waiting room were a dog and a cat with their owners.  The dog immediately got up and forgot that he was sick pulled at his leash and wanted to get near Arthur's cage. Arthur who didn't sing anymore as soon as the car had stopped, looked at him bored and preferred to look at the other cat. The vet arrived she had seen me coming.

Arthur was very brave on the table and let check his paw without any problem. Diagnostic was, she had to take out the claw, it was so deeply broken that there was nothing to do any more . So I had to leave Arthur with the vet only for 24 h. I could pick him up at 5pm the next day. Heavy hearted I drove home and Mr. G had a sleepless night !

Next day punctually I arrived to pick up  Arthur. The vet opened the door and with a relieved sigh told me that she was happy to see me. I wondered why, but then I went with her into the consulting room and saw  Arthur walking around ! When he saw me he came immediately to greet me walking on three legs the forth  with a nice blue bandage which matched nicely with his fur.

I asked if everything was OK and she nodded a yes, Arthur is fine, she said, she had taken the claw out and now it has just to heal. Politely I asked her if he had been good. I better didn't have asked !

As soon as she had locked Arthur in a cage in a special room, where all the others sick animals were in their cages already operated. Arthur started singing.

He sang louder and louder, and finally she couldn't stand it any more (Arthur always wins) and let him out.

Immediately Arthur was the best cat in the world. After having examined the whole room, while a cat sat on the table and had sniffed all strange smells, even if he could hardly walk He sat down on his three legs and observed what was going on with the cat on the table.

And so it went the whole afternoon. He stayed there and observed the sick animals and what was done to them.  But at one moment she had to close her consulting room and had to lock Arthur into the cage again.

She told me the last thing she heard before closing the door of the room was a noise similar to a tortured person. But she had to leave and I only came later. 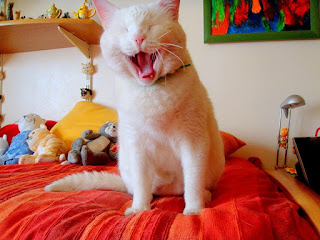 The vet told me that she had never ever met a cat like him he hasn't scratched not even hissed at her,  the only thing he had done was protesting with his "beautiful" loud voice. And she sees a lot of cats.

We left, Arthur sitting in his cage and looking around. In the car, as soon as I started the motor, he thought he had to make an anti-noise and sang again with all his heart until we arrived home. 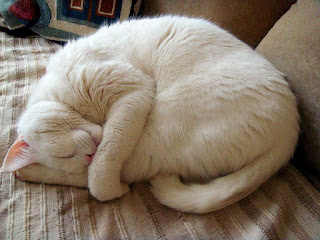 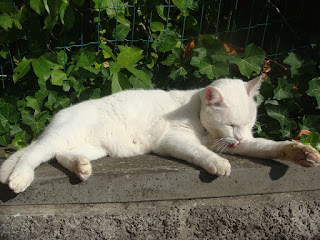 
Linking to Linda G.Hills One liner Wednesday
Posted by Gattina at 05:12