This morning when I woke up, the sun was shining but then half an hour later buckets of water suddenly fell from heaven, lasted about 5 min and then it was over !

As the sun came out went to the Ringmer Steam and Country Show.

Ringmer is a village in East Sussex, England. The village is located 3 miles (4.8 km) east of Lewes.
It is one of the largest villages in the south of England.There has been human habitation since at least Roman times which proves again wherever I go the Romans have been there before ! 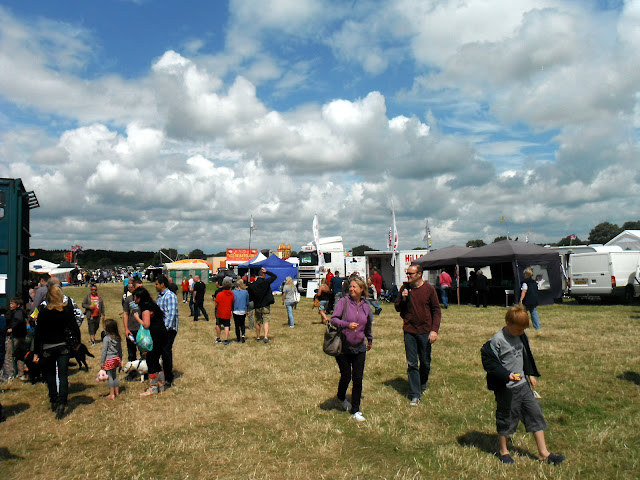 The showground was a huge field, where steam engines, historical vehicles, motorcycles, etc were displayed. 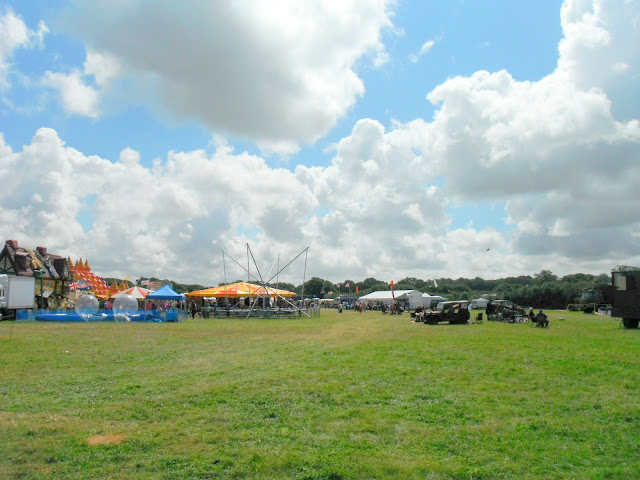 There were also a playground and toys 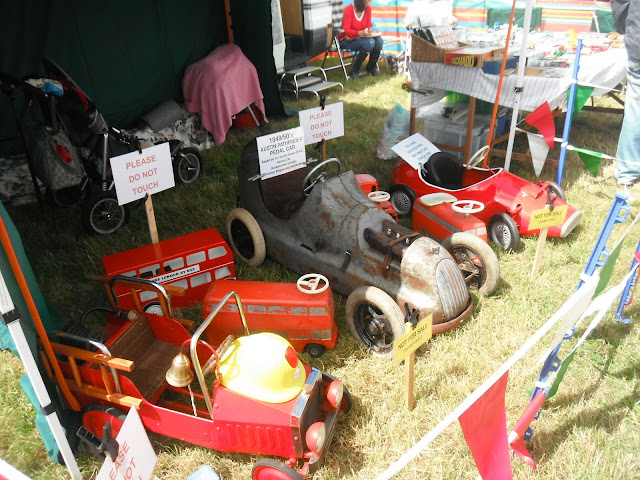 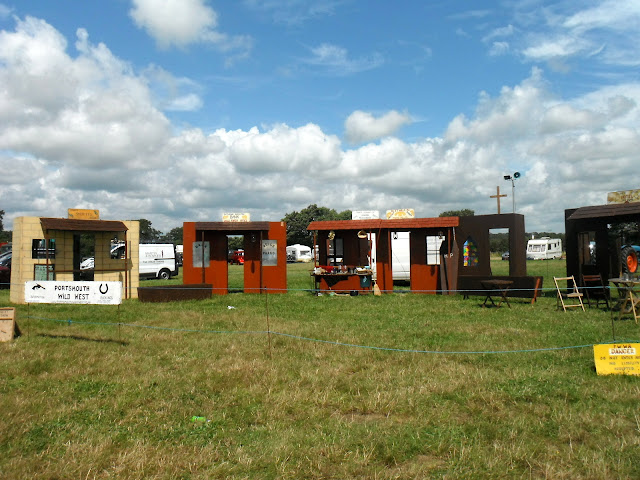 a cowboy shoot out, where later some Cowboys "killed" each other 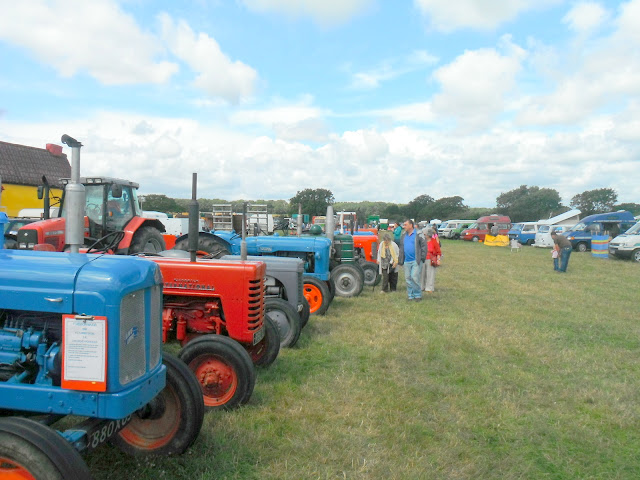 My friends Anne, Doug and their neighbor Yvon inspecting the tractors

I also saw for the first time Punch & Judy the famous puppets which all British children know. I sat there with them and and listened to the story ! Was very funny. 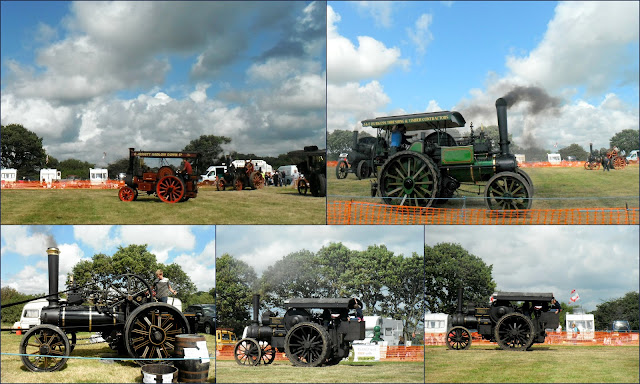 Then these old steam engines were shown, they smoked and stank, I wonder how people could survive working which such things and some of them lived until their 100, if today smoking a cigarette is already a life threat ! I pinched my nose ! 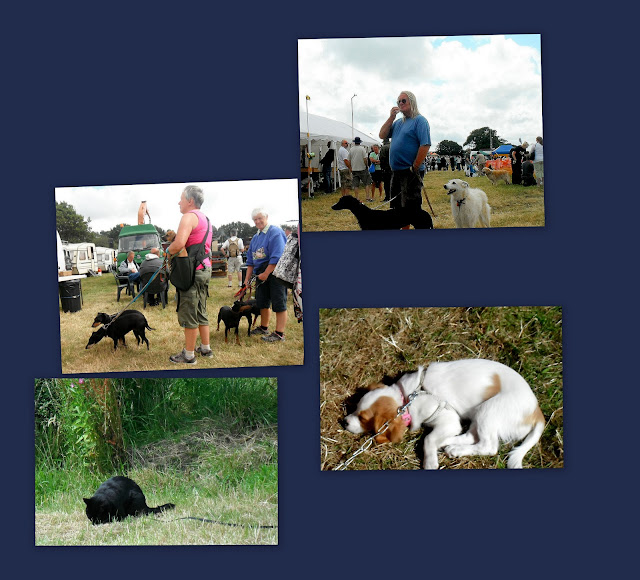 I had a delicious cheese toast and a cup of tea and started to count the families which arrived with one or several dogs ! I quickly gave up counting there were too many ! but I also saw a black cat on a leash. 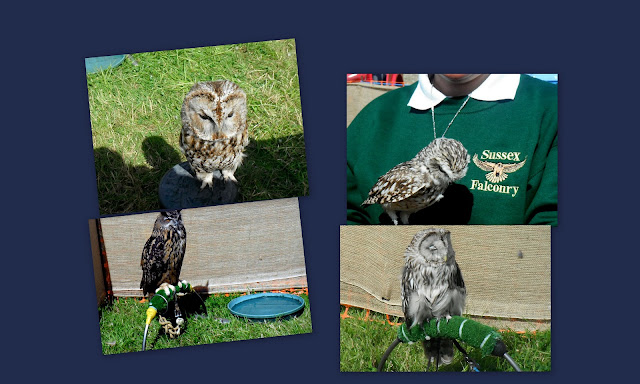 The most cute stall was where the owls and falcons were ! The little once were so cute, and the big one looked like a bad tempered old man !

After having visited an impressive amount of stalls selling old and new stuff, I bought a pair of earrings for a pound and then we slowly returned to the car.

We were quiet tired, and only felt better after a good cup of tea. We had a very nice and sunny day, only the wind was strong and therefore it was quiet cool.

For supper we had roasted chicken with Broccoli and a warm apple pie ! I watched a little bit TV with my friends and then dropped in my bed !

You sure are living it up. I remember Punch and Judy shows. It is great that they are still going. It sure looked like an interesting, historic fair. Those Romans were everywhere. A clever and strong bunch. Whatever happened to them?

Hi Gattina .. there's lots of Roman history in Eastbourne - it was called Anderida - and much is out to sea now - particularly around the pier area.

There's a museum in Seaside Road - not sure if it's still going as the proprietor is/was over 90 - I managed to pop in there a few years ago (while my mother and uncle were both seriously ill) .. and it was fascinating.

It really is worth spending a while there - incredible collection and there's a historical section explaining Roman Eastbourne etc ...

These pictures of Ringmer are just wonderful and those steam engines - you've captured the spirit of rural life ... so pleased you had a good day.

Wherever you go Gattina you find Shows, Festivals or Fairs, I'm sure they are only put on when they know you are visiting. This one looks great, the English do love their dogs. I don't think my 2 cats would go anywhere on a lead.

On my last visit to the UK in 2005, I attended a show like the one in your post AND the weather was perfect like you show here ! I grew up with Punch and Judy shows in SA. Glad you experienced it once! Imagine that you saw a CAT on a leash. Yes, the English always take their dogs to outings which I find very special. Greetings, Jo

What a wonderful collection of things you found. Punch and Judy, the old kiddie cars, tractors and western show not to mention walking on a path trod by Roman soldiers. Must have felt funny.

What a wonderful event. I also love Falcons and Owls! And Hawks. When I was a young girl I found and injured Hawk. I carried it home and we helped to cure it. Eventually the Fish & Game people heard about my Hawk and I had to bring it to their preserve. The man asked if it was friendly. Well, it was to me, (I was six years old!) and I said yes. The man went to take the Hawk from my hand and the Hawk bit him! Poor bird, would have been happier with me!

My son would have loved that show. He loves tractors and steam engines.

You are having a wonderful vacation -- I have enjoyed all three of the posts....you're lucky to have such a short trip to so many different countries!