Other then to send you a kiss,  I couldn't discretely put a "K" into my holiday diary, to take part in the meme ! No other word fits !

The weatherman had announced 20°C and sunshine. I told myself "Hurray" and off I went to take the bus to Brighton England's most populous seaside resort.

As soon we had left a sunny Eastbourne,  it started to rain ! As I had been the first person on the bus I also had the best place for taking photos. I sat on the second floor just over the driver ! Unfortunately my pictures are a little dark and decorated with raindrops. 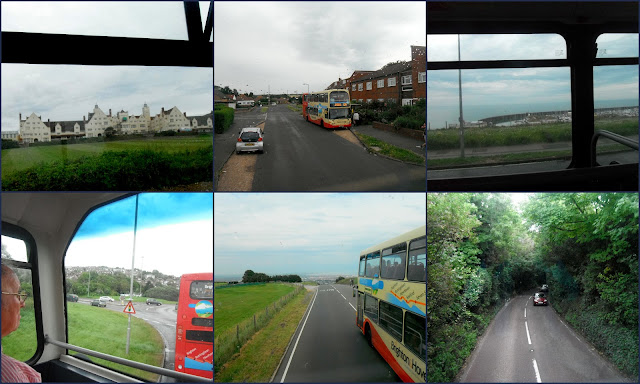 A very nice view from the bus 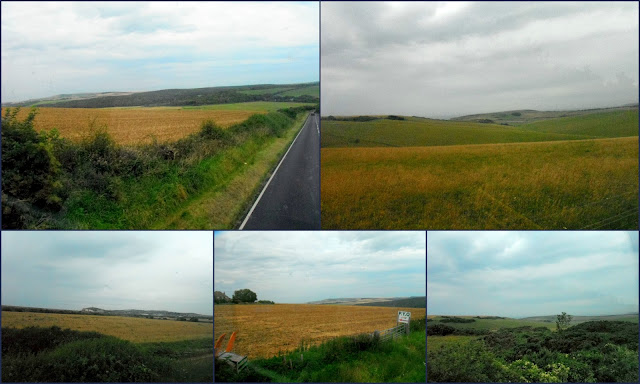 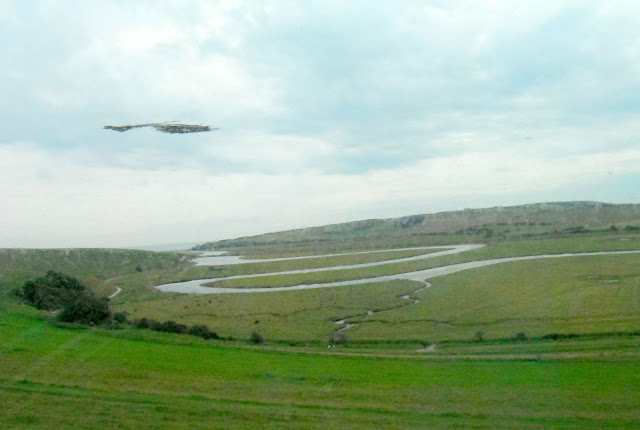 Even in the rain the South Downs are such a beautiful landscape ! So peacefully in various greens, as far as your eyes could see ! Fortunately I had seen it before when the sun was shining !

After an hour through little villages and beautiful landscapes we finally approached Brighton. 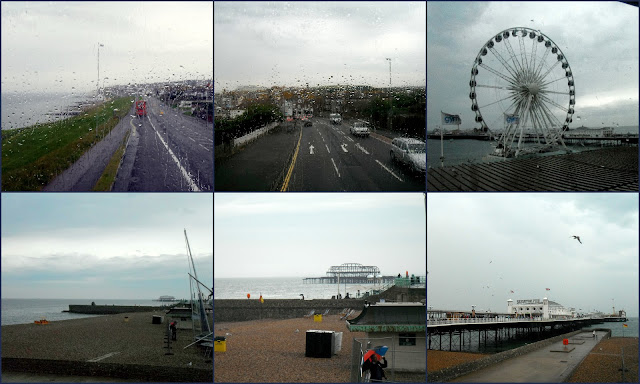 The so famous Pier from far didn't look very special compared to the beautiful Pier in Eastbourne. There was also this wheel which I called "The Brighton Eye" but definitively had nothing to do with the London eye !

When I got off the bus it rained that much, that I only seeked for refuge 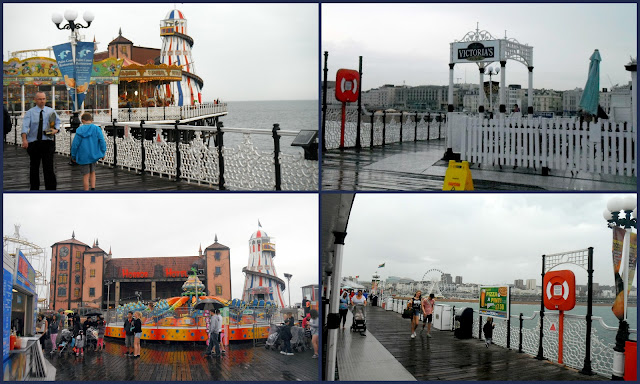 and the closest was the Brighton Pier ! I thought I had stumbled into a funfair ! Lots and lots of games for kids and a casino like hall in the Pier building itself ! There was loud music coming from everywhere, not the kind of place to rest ! 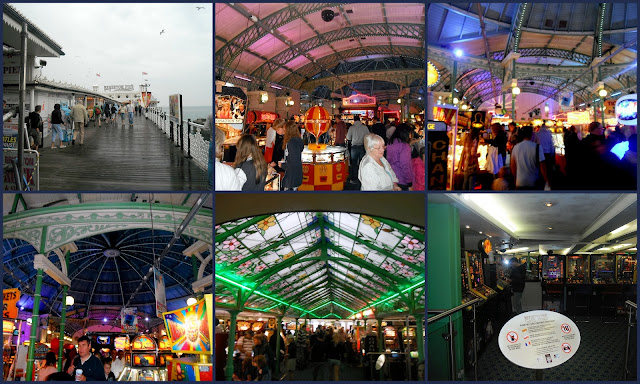 The inside of the Pier must have been very beautiful, but now with all these gambling machines, it was packed and I quickly got out of there. You weren't allowed to take pictures either because of the gambler's guaranteed anonymity. I didn't even find a decent place to eat in peace, a little café or something, there were only food stalls which are nice when it's warm and sunny !

I had completely other memories of Brighton because I had been there in the 90th, I hadn't noticed the ugly seafront which looks like the Belgian one, mostly new awful modern flats in high buildings.

I had enough, and wasn't keen to see the city itself in the rain. Brighton is certainly a nice place for young people to dance the whole night through or for gamblers who want to spent their time with gambling. Nothing for families or elderly people in my opinion.

I took the bus back, the rain had stopped and I  enjoyed the cute little houses in different styles. 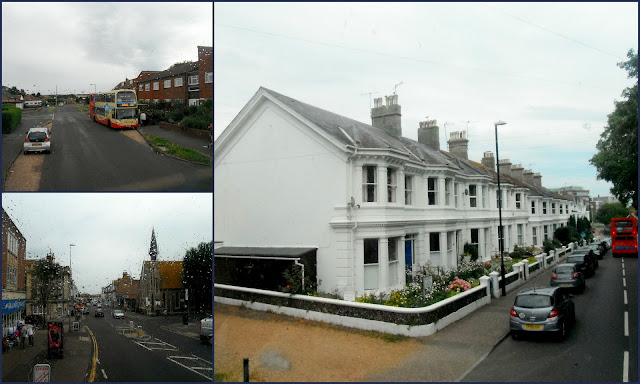 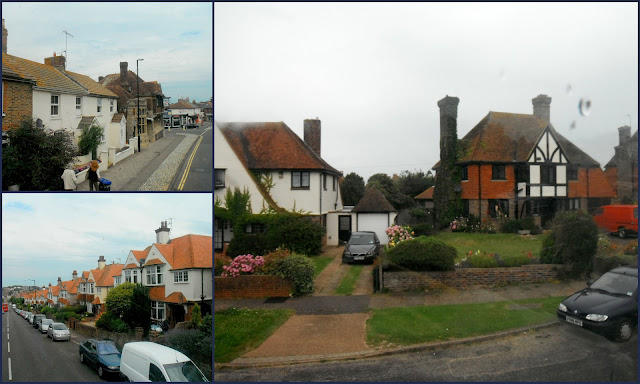 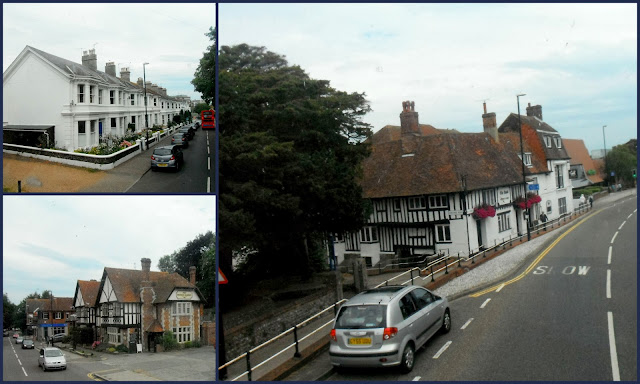 all along the way driving through the little towns or villages with only a Pub, a postoffice, a shop and a bus stop !

And then I arrived in Eastbourne again, where the sun was shining ! In such a short distance the weather was completely different ! 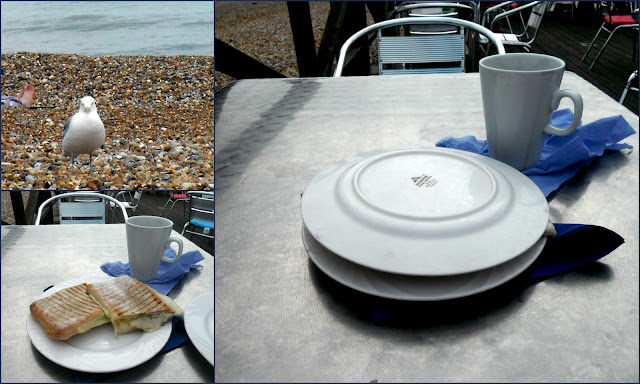 I sat at the seafront and ordered a cheese toast and tea, and was served like this because the seagulls steal food even out of your plate ! 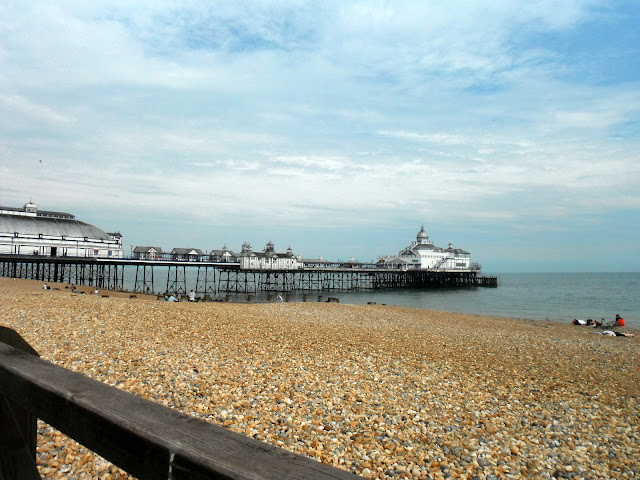 I stayed there for a while taking a little sunbath and enjoyed the nice view on the Eastbourne pier, watched the people walking along the sea and then I returned home.

You have the happy knack of finding something of interest wherever you go. Shame about the rain, though.

Nice outing despite the weather. Yes, seagulls are not kind and love your food... Blowing air kisses your way!

Looks like a lovely trip, sorry about the weather. The last photo looks like the sun came out for you.. Thanks for sharing your tour and world.

Now that was one 'K' word I didn't think of! I'm loving this journey around Eastbourne! Thank you!

So sorry about the weather and the horrid Pier. Glad the sun came out for you when you went home. I just loved the little houses in special styles. Cute. Hugs Jo

beautiful photos of your trip. even the rainy ones. (our family has resigned ourselves too the fact that rain goes on vacation WITH us, no matter where or when we go!) lovely k post.

I think all the pictures are great! What I think is the koolest thing of all is you rode a double decker bus. You know here in the states this is something you just don't see too much of, soooo I think it would be so marvelous to travel this way.

Gattina, your photos are wonderful. I know you were disappointed about the noise and the rain at your destination, but it looks as if you definitely made the best of it. Sometinmes the best places to visit are right in our own back yard!

Rain or shine, you got some WONDERFUL photos. And Brighton looks so charming.

I agree with Sue...it's just the way it is in the UK, no? Looks like a wonderful holiday, rain or shine!

That looks like fun, actually. You got some great shots, had a cheese sandwich...life is good!

That last photo is my favourite. And yes, gulls are cheeky like that.

I agree - the Eastbourne pier looks much nicer! But the beach! Can you walk barefoot there? It looks like all rocks, though they must be rounded... {:-Deb

Views from the front seat on the top deck of a bus are always the very best ones.
Who wants to sit on a beach full of pebbles and no sand in the rain?? So the English must have piers and fun fairs to keep them busy on wet days.
I love those old piers.

I love all the different village architecture. Sad about the rain and the clientele of Brighton. My daughter, Sonya, used to work there during the festival season stage managing shows in the Famous Spiegeltent. Great shots of the views and the cheeky seagull eyeing of your lunch.

I do think you should just pack the rain up and send it to me. :-) Then it wouldn't spoil your lovely day.

a kiss from Prince william, or his Dad, Charles or even his grand dad Philip would be nice.

Hi Pauleen .. at least you had a fun day out of just being - the Downs make a huge difference .. it is much sunnier over this side. Pity you didn't see the Royal Pavilion - that's an amazing place to visit - next time you're over ..

Cheers and I love your photos of the houses, town and street and that one of the oxbows at the Cuckmere Valley - great shot from the bus --- Hilary

I love the brilliant colors of the bus against the dreary grey sky!

Cheese toast! Yum! The plate cover made me smile!

Thanks for a kute link for the letter 'K'.

Hugs and Kisses and A+