It's Monday and the weekend over. I bought a weekly bus ticket to be more independent, as my hosts have also other things to do as driving me around. The ticket was rather cheap because one return ticket is very expensive, it would only make 3 rides for the same amount. Now I can travel as much as I want to all little towns around Eastbourne or along the sea.

This was my first stroll along the seafront. It was quiet cloudy, but the sun came through and although it was only 17°C (63 F), in the sun it was nice and I could sit there after having made a tour on the Pier 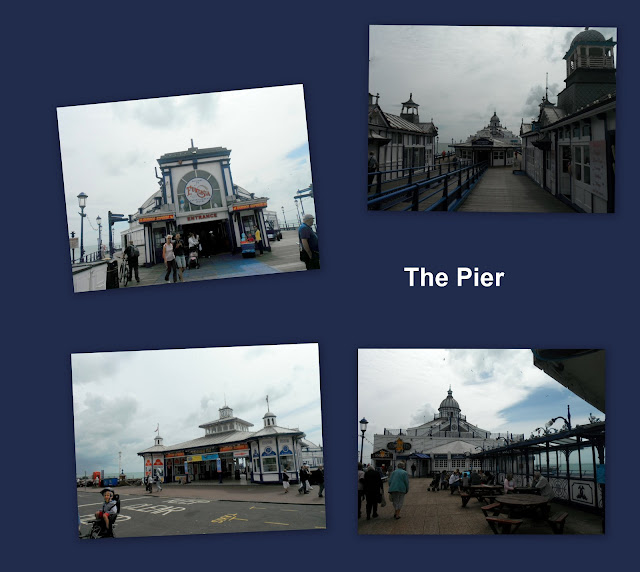 It is beautiful and built in Victorian style. As I almost blow away because it was very windy on the Pier I just made a tour, took some pictures and went down to the beach. 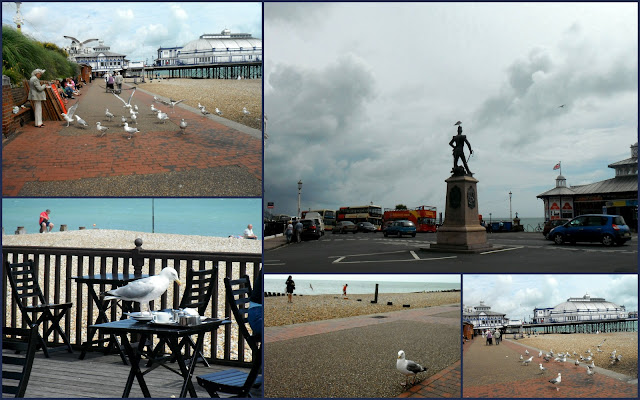 There I sat in the sun and watched the seagulls fighting for food or sitting on the tables and checking the plates. One decorated the head of a soldier. They made quiet a lot of noise and once I thought it was a woman laughing but it was a seagull ! 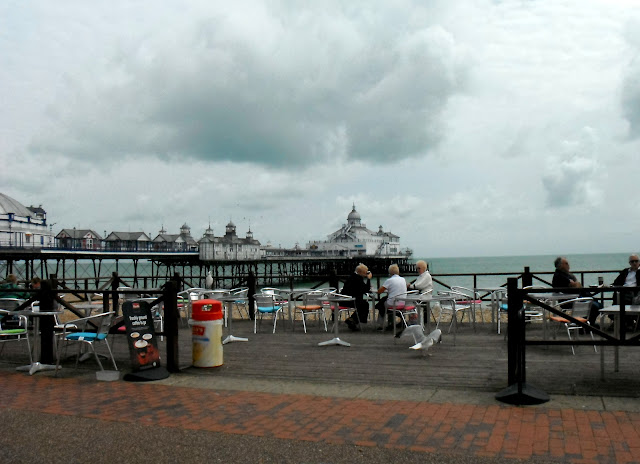 The good sea air made me hungry and I had a cheese and pesto toast with a cup of tea at this lovely place. 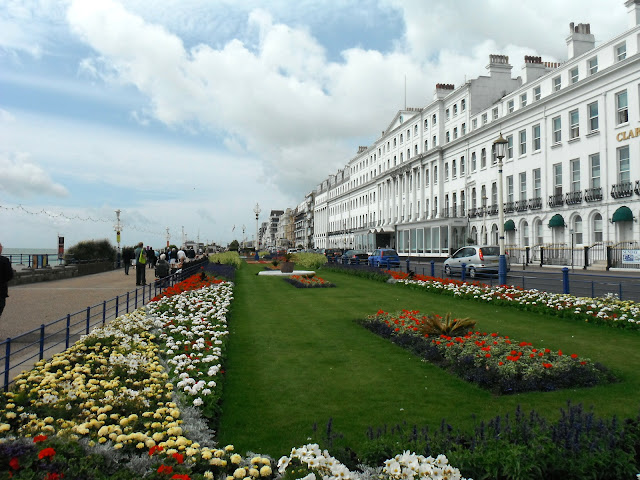 The seafront is very beautiful with all these flowers, palm trees and the old Victorian houses. 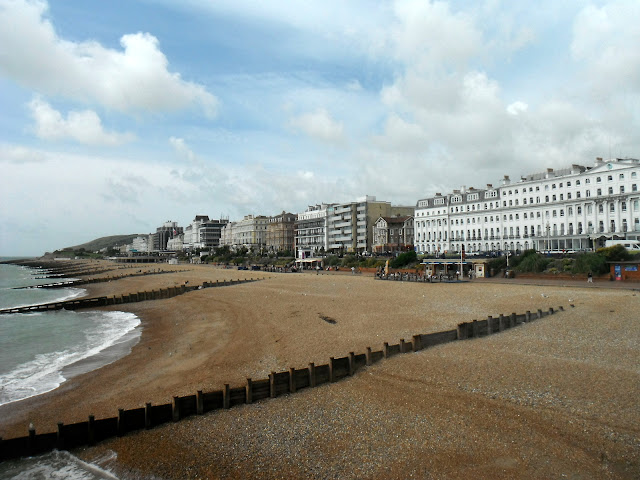 The beach was rather empty because it was too cold. Later a few courageous people came with beach beds to lay down. 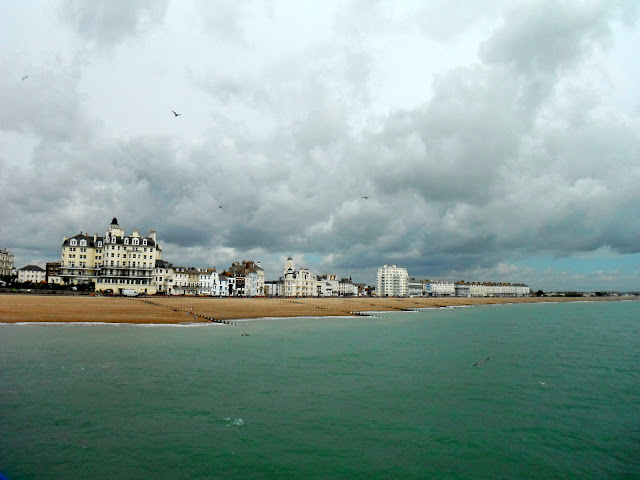 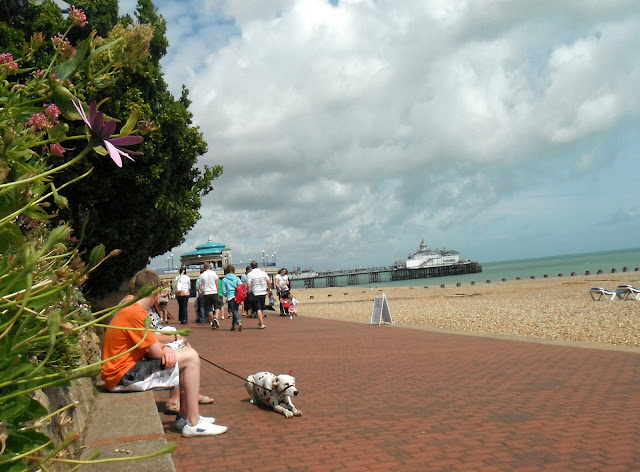 I sat besides two old ladies who talked about their funerals. They wanted to be incinerated and were asking themselves what to do with their ashes. I listened but refrained from giving any suggestions ! I am sure the seagulls would find a solution ... 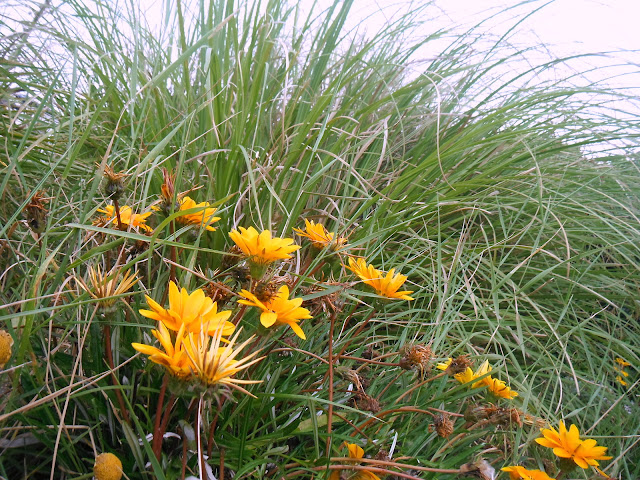 The flowers behind me were beautiful 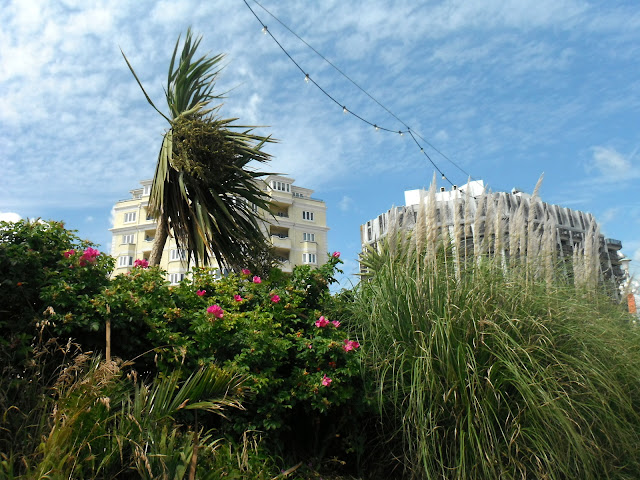 I could think that I was at the French Riviera. I even got a little sunburn, because I hadn't thought to put some suncream on my face ! 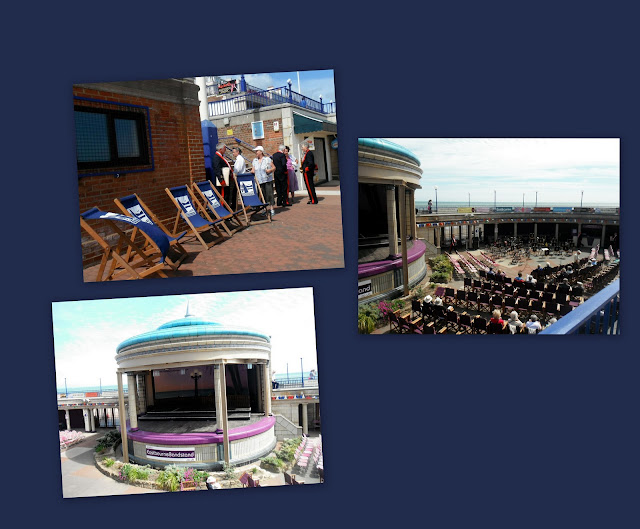 The afternoon concert started at 3 pm and I saw the musician preparing their instruments. 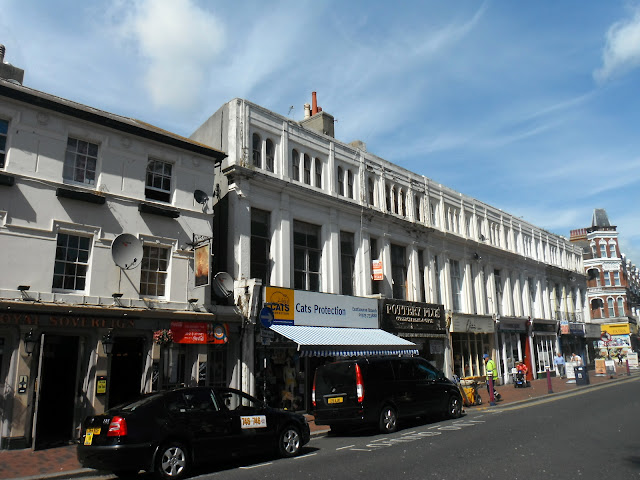 On my way to the bus station to return home, I saw this shop "Cats Protection" of course I went inside to buy something, but unfortunately there was nothing.

I returned home without any problems and even found the right stop to get out ! Miracles happen.
Posted by Gattina at 06:00

Wonderful shots of Eastbourne! I love the British seaside.

Thank you so much for taking us along with you. Very nice place and nice story to come along with. dropping by from OWT.

Wonderful post and enjoyed the tour with you ~ am so glad that you are having this wonderful 'holiday' ~ Fantastic photos and presentation ~~ thanks, namaste, (A Creative Harbor)

What a wonderful tour! Thanks for bringing us along. I woke today and found that Fritz is limping. Seems the leg he injured when the horse stepped on it, is acting up again.

Hello Gattina - how lovely that you're holidaying in England. I do hope you enjoy it, even if the weather is a bit mixed.

You seem to be having a great time and the views are spectacular!

Here in BC we have one day hot one day cold one day a little of both but it doesn't discourage the people from enjoying the water.
Busing it is a great way to explore. The main thing is to enjoy.:)

Glad you are enjoying Eastbourne. I have promised myself that I will pay a visit next Summer when the Tennis tournament is on as apparently it is an excellent one to go and watch. Might wear a hat though - those seagulls are very good shots!

Lovely photos. Eastbourne looks very beautiful. Glad you got out at the right stop ;)

I love the Englisg seaside with their wonderful old piers. So much to do, I'm sure you enjoyed yourself.

Well done. The public transport in England is pretty good. You'll soon learn your way around. It sounds like you had a nice relaxing time. Shame it was so cold in summer. we are having warmer days than that in winter but it does get cold at night.

Hi Gattina .. so pleased you enjoyed your stay here .. the seagulls are still squawking - but airbourne starts this weekend - so they'll be blasted out for a while!

Great pics - seen through someone else's eyes .. it makes a difference - cheers Hilary