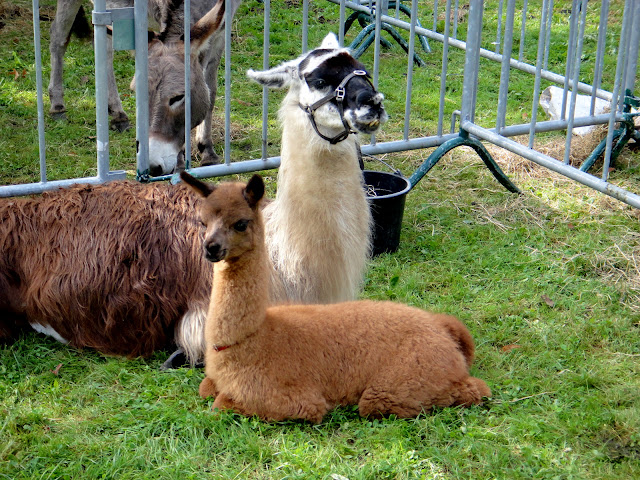 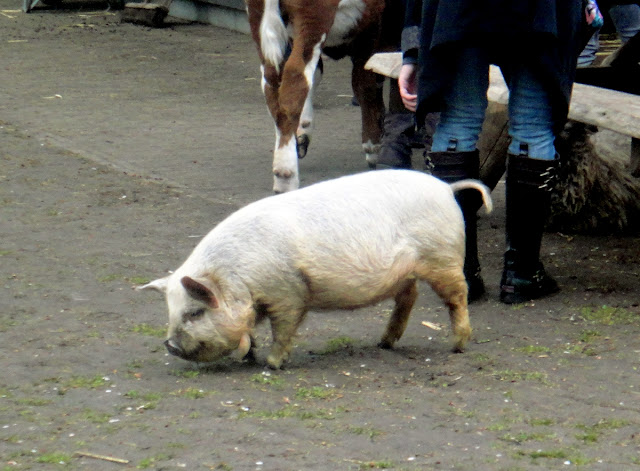 The weather has decided to be even worse on weekends then during the week, it rained and it was windy in short disgusting.

In the morning both of us were looking for our Roulette game, Mr. G. turned the whole house upside down, inspected closets from basement on and all rooms but it was nowhere and we didn't remember when we had seen it last time. In fact I needed it for Sunday to play roulette with my Scrabble girls.

As we were all blocked in our houses, Nicole, Myriam and I decided to do a little walk through our Shopping center, at least there it was dry and there were a lot of people who had the same idea. Even if you don't need anything it's like a refuge against too wet, too hot, too stormy weather. 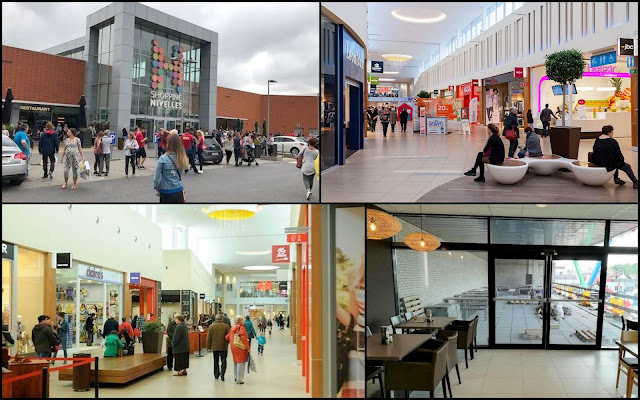 It's a nice shopping center not far from us and we did our little window shopping  and then had a coffee and a piece of mango cake there in the Lunch Garden. It was nice to see people walking by, we had only bought some nail vanish each. Finally it had been a nice afternoon and at least we got out of the house ! 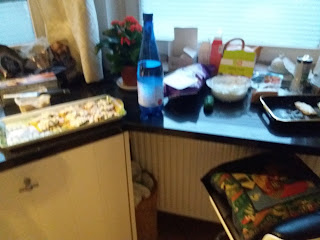 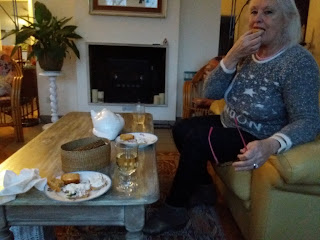 On Sunday it was exactly the same grey rainy day, but we had decided to play Roulette together at Nicole's. We were four and each of us brought snacks and something to drink and then we started.

As I still hadn't found my big roulette but only the jetons, we played with Myriam's travel roulette ! 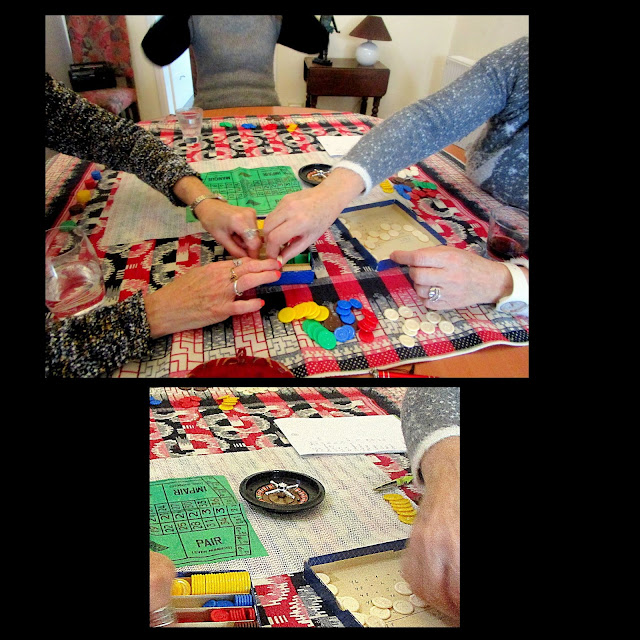 It was really a mini roulette but big enough to play. As we all had forgotten the rules I googled them on my smartphone and we started to play ! It was so funny ! I played very carefully and at the end had earned quite an amount. A pity that it wasn't real money.

We finished and started to celebtrate the Saint Chandeleur (Candlemas ?) which is very much celebrated in France and Belgium. It's a religious holiday  that nowadays basically just involves people eating a lot of crêpes. ... Before becoming a religious holiday, Chandeleur stemmed from several pagan traditions ... 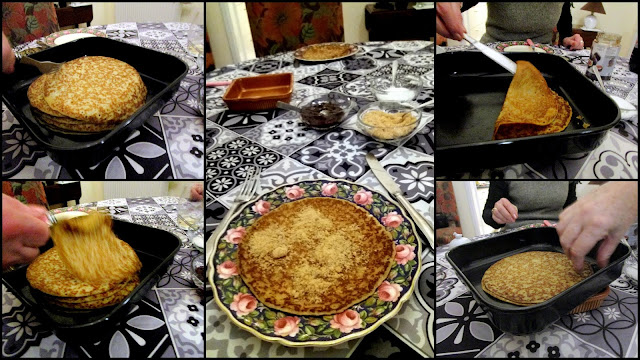 Nicole had prepared a stack of very thin crepes which we ate with brown sugar or figs jam. I would have never believed that we four would eat this whole stack ! But we did ! Not one was left !

When we went home at 8.30 pm there was no room in our stomachs for supper ! It was a perfect afternoon with lot of laughter which let us forget the horror weather outside ! 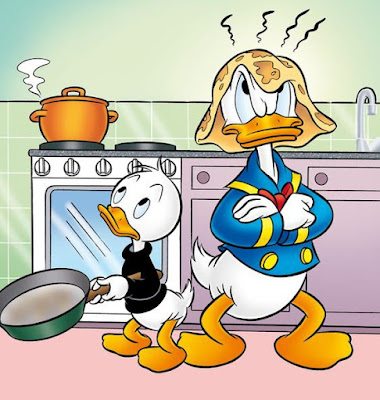 Love the Llamas, they look adorable. Crepes sound good too. They are small, so why not eat them all during a dreary day?

What a beautiful day, crepes and llamas,a pig, time spent with friends creating art and a beautiful kitty - looks like fun.

Awww on all the critters. I would have had fun there.

Looks like you made a cold, wet and miserable weekend quite grand. How fun.

That sounds like a fun holiday tradition to eat a lot of crepes!
Great photos of adorable critters :-)

The Spanish Team Coach (after the round of 16 game) said...

Rose Lavelle isn`t just a great player and goal scorer. The little darlin` also looks just like a beautifully pale complexioned, sweet, charming, magical, fawn-like, fairy-like, pixie-like, elf-like, lovely, cuddly, fluffy, wittle bunny wabbit. (Thats when shes not cheating by diving in the 18 yard-box when she hasn`t even been fouled to try to con the ref and VAR into to giving her an unfair PK of course!).

Heres a list of things i desperately want to do to the 17 year-old Pauline Hickey from 1985: I want to fuck her, bugger her, sodomize her, 69 her, spunk all over her, and of course...OF COURSE...tit-fuck the bird senseless. 34 years ago that birds tits were THE most staggeringly and mind-bogglingly unbelievable i`ve EVER seen, the bird was totally beyond belief.

what kind of porn do you like ?, i prefer the Windows Vista Media Centre clips, the same 5 or 6 thrusts of the dick in and out of the birds bum over and over again or the same 5 or 6 squirts of spunk into the birds gob over and over again. Somehow i find it easier to concentrate, focus and jerk-off to those clips rather than watching the complete movies, perhaps because the clips essentially represent and constitute such beautifully encapsulated and perfectly modulated masturbation-aids par-excellence (as it were) where-as the complete movies are quite often much more erratic in their content both with regards to constantly changing camera angles and the type of scene on view at any given time during the 40 or 50 minute duration of the film. Also of course another major plus and vitally important bonus that you get with regards to the very best of the clips is that you never have to worry about a hideous and horrifying blokes arse suddenly coming into the shot and spoiling your wank.

"Being James Bond has brought me a lot of fame and money but theres still one thing i would gladly exchange it all for, i`d love to somehow travel back to 1985 and tit-fuck the truly amazing 17 year-old Pauline Hickey. Everything i`ve achieved in the last 15 or 20 years would still be nothing when compared to having my knob squashed and squeezed between THE most incredibly perfect tits of all-time and then unloading literally half-a-pint of spunk all over those astonishing knockers. 34 years ago that bird was THE most staggeringly unbelievable big-titted sex-pot i`ve ever seen. The bird was totally beyond belief in her unparalleled perfection ! ! !"

You girls know how to enjoy life - window shopping, roulette game, crepes. Kudos to you!

Awww indeed to the critters.

That sounds like a good way to deal with bad weather. Coffee in a dry supermarket and games with friends.