1. My friend Claudie arrived from the French Riviera where she was melting in 40°C (104 F), in Belgium, where it was the last warmest day of the week which means 25° (77 F). She was happy to be able to cool down, because there is no or very poor air condition in Southern France too. Of course we had a lot to chat !

2. Unfortunately she had no luck, because it started to rain, but not a friendly rain,  it rained cats and dogs ! We finally went out for lunch and had mussels with chips, the traditional Belgian plate. It was very good. Apparently the mussels from the North Sea taste different than the once from the Mediterranian Sea. 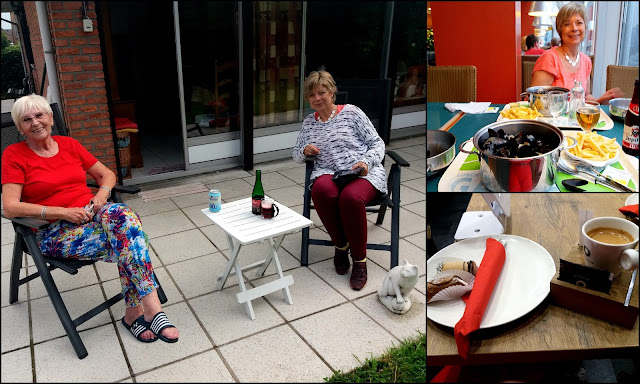 Then we went to Nivelles the next town to the big shopping mall. There it was dry lots of people who had the same idea and we could window shop without becoming wet. The shops are exactly the same we have here in Waterloo on the main street. We are both not "boutique" girls but it was interesting for her to compare the prices and what is on the market here.

We then had a coffee with little Italian cakes and we admired the wooden saucer, we had never seen such. It looked really very special 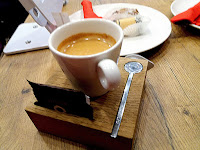 4. Claudie although she had been quite often in Brussels had never seen the Royal Palace inside and we were lucky it was just open for the public and for free ! It had been ages that I had seen the palace from inside and didn't remember very much. 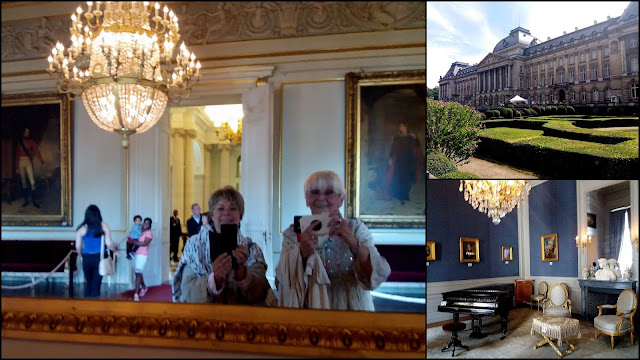 I hadn't realized how beautiful it was ! There were so many very special things that I will write an extra post about this palace. Claudie was startled. So much gold and crystal lustres ! 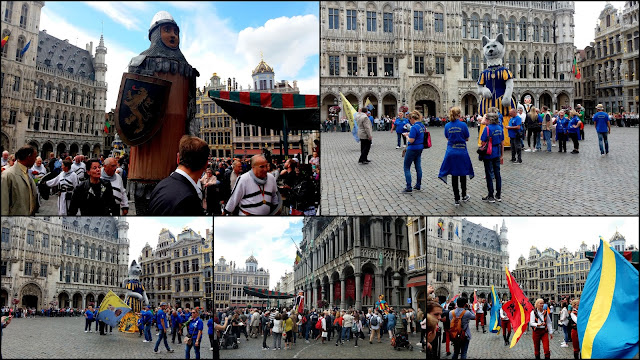 After the palace visit we badly needed a drink and we went to the Grand'Place. To my surprise there was the Meiboom celebration going on ! Every August 9th,  a young beech tree is planted near the Grand'Place. Unfortunately we just saw the end of the procession but it was a very cheerful atmosphere.

5.  I had my Scrabble afternoon and of course Claudie came with me. As me she likes not to be a tourist in another country but take part of the daily life of her host. Her only fear was that she hadn't played scrabble for over 20 years. 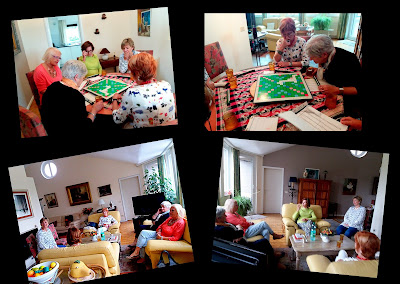 Apparently she had no problems at all because she finished second ! After our game we had coffee and cookies and a lot to talk about the different lifestyle of north and south. And while Claudie's husband at home complained about the heat, we were happily sitting with cardigans and complained about the rain and cold weather. But we had fun and that was the most important thing.

You gave your friend a lovely time.

The palace looks beautiful and great that it was free entry. Buckingham palace is only open for a few weeks each year and it is expensive to visit. I'm glad of the lower temperatures but not the rain! Have a good weekend.

Sounds like a lovely day out, great photos too. Greetings to you!

Sounds like a wonderful time! I haven't been to Europe since I was very young. I would love to visit again some day. I would love to see that palace! How nice that your friend was able to go from 104 degrees to 77! We've had a brutal summer here and I welcome 77 degrees anytime it would like to arrive! We're having a cooling trend now. Only 97 today.

Sounds like your friend Claudie and you had a great time together!
The wooden saucer for coffee does look very special. I've never seen saucer like that, either. Great photos from the Meiboom celebration. I couldn't help but noticing the giant cat :-)

It sounded like you guys were in Tucson AZ for a bit! :-) Super heat, and then raining cats& dogs..yep Tucson summer monsoon season to a T! Great photos. Hope you have a great weekend!

Seems like you had a wonderful visit with your friend! The wooden saucer with the coffee cup is very interesting. The palace looks like a wonderful place to visit. Hope you have a wonderful weekend and great weather as well!

What a nice visit with your friend! Glad she got some respite from the heat. The palace looks so beautiful!

I suppose very different water temperatures is one reason why the mussels would taste different. I like the way the spoon fits into the wooden saucer.

That was great that the Palace happened to be open for tours when Claudie was visiting -- perfect. In spite of the rain, it sounds like a very fun week.

Looks like a nice times despite the heavy rain.

So much nicer to be with a local rather than a tourist. Hope the weather keeps dry for the rest of the visit.

What a fun time you and Claudie had: getting a respite from the heat, seeing the beautiful palace, coming in 2nd at Scrabble, eating some delicious food and having lots of chatting time.
Wonderful and memorable time together.

the procession looks very colourful and great fun, and of course any excuse to plant more trees is a good thing :)

Thanks for joining in again with Five on Friday, I appreciate all of your support and hope you have a wonderful week

What a fun time you had with your friend. And I'm glad for you both that the weather was not so hot.
Looking forward to seeing your photos of the Belgian royal palace.