1. For the first time this year it was warm and sunny, the ideal weather for a little walk. 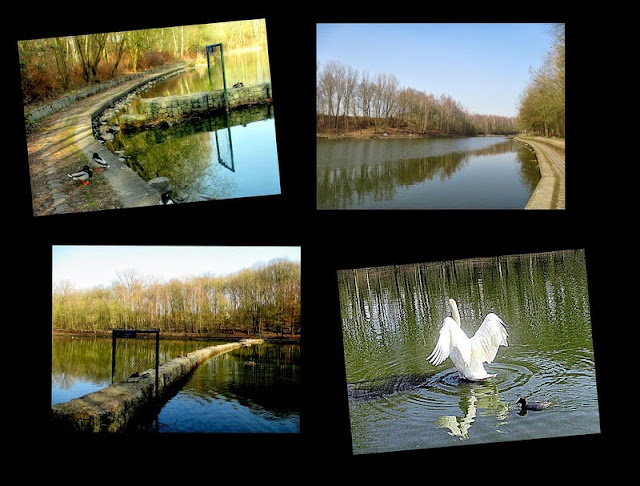 My neighbor Dominique and I went to the little park in Waterloo and walked around the pond, watching the ducks and swans. But no little flower was seen yet.

2. I drove along the Waterloo battle field to take pictures of the farms which had gone into history

Most of them were ready for the bicentenary of the battle.

3. The Waterloo city had asked for volunteers to help the huge amount of tourists who will come to celebrate the bicentenary of the battle in June, and to show them around. So I went to the City hall and put my name on the list. There will be enough English speaking people as we have a big English speaking community, but German is more seldom.

4. Nicole had invited Dominique and me for an afternoon chat. We wanted to sit outside on her terrace, as 17° were announced, but finally the temperature decided to disagree with the weatherman and it was far too cold ! So we had a glass together and chatted inside.

5. The Waterloo city organises a "Route of Artists" in October, which means that all artists are asked to expose their works in special rooms or at home. The public is then invited to follow the route and visit the artists. Our group exposes in our usual class, but for publicity purposes we had to paint or draw a very small square which should represent the style of the painter. 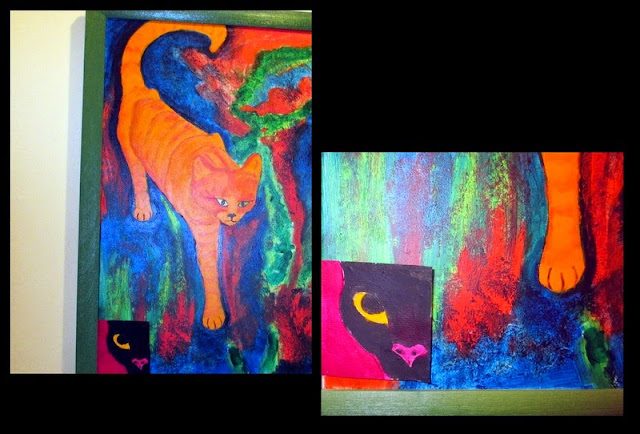 This was very difficult for me as I am used to big canvas and I had to paint on carton paper. Finally I managed and painted half of a cat head. 25 participants do the same and then they will be glued on one big canvas ! I am really curious to see the result !

Maybe you will be famous soon!!!

I am glad it is starting to warm up a bit! That is a really neat opportunity to help with the potential visitors for the bicentenary.

Isn't it nice when the sun comes and you can get out and walk?! Fun to see the birds. The art show looks like fun. Love the cat. Happy Spring!

that's a happy painting . . thank you for sharing your spring adventure - flowers to follow . . soon, i think

How exciting to be a tourist interpreter for the Battle of Waterloo bicentenary.

I like the orange cat, but it did take me quite a while to recognise the little painting. I did in the end though!

What a lovely idea to create one work with all of the artists represented. Hope you have fun being a tour guide. I think you would be wonderful, for I love hearing all your stories.

That would be very interesting to see when it is all finished and all the artists little squares are together. Neat idea. It sounds like your city very much supports it's artistic community.

I really love the cat pictures. You are talented.

Hi! The landscape photos are very nice. I like your paintings too. Thanks for sharing.

I'm glad it has finally warmed up enough for you to get out for walks although it's still too cool for drinks and chats on the terrace.
Your painting amazes me since I have never tried any drawing or painting.

I like the idea of the artist walk very much and your kitty picture looks like great publicity for it; hope the others measure up.

Your paintings are very colourful and "lumineuses"! the nature is fabulous in Belgium when the weather is ok! I love it and the buildings too ! Nice you will help for the battles' days! I imagine the good adventures you will present to us as guide of german people!

Love your paintings. They are so colourful.

Your photos show a perfect day for a walk, what a lovely place you have. Soon you will be able to sit on the terrace! That's an interesting way to display one's art. The collage would be interesting to see.

Happy Week to you,
artmusedog and carol

That park looks pretty. Being in Waterloo for the big celebration would be very interesting!

The route of artists sounds very interesting and I wish we had something like that in our city. The small square you did turned out lovely. I bet the compilation piece of you 25 artists will be cool to see. Take plenty of pictures!

Glad your weather was warm for one day. The pond you walked around is so lovely even though there were not any flowers yet.

I hope you have some more warm weather ths week, Gattina.

Love your walk pictures. The first 4.

Wow your cat is good. You should show the result when you made it bigger.

You are the artist.