In 1963 the company I worked for, exposed at the The Nuremberg Toy Fair  (Spielwarenmesse). All the top brands as well as start-ups and large chains, make the Nuremberg Toy Fair the most important meeting place for the toy industry. I was there to translate from German into French. After a long day of work my Boss and another colleague decided to visit this zone. I have no idea if it is still there, but at this time it was in a special area and only men where allowed to drive or walk along the streets, where the girls were standing or sitting behind red velvet curtains.

The problem was me because women were not allowed. So they looked at me hoping I would say "take me to the hotel" but I was far too curious and wanted to come with them. After careful consideration they finally decided to hide me on the back seat of the car. The only thing I had to do was kneeling between the seats so that nobody could see me from outside, but I could look through the window.

No sooner said than done. I climbed in the car and they drove direction red zone. It was located in a very old and a little dirty looking area and suddenly we arrived at a wall which is called Frauentormauer (women wall gate). Here they told me that I had to hide now. Which I did. Peeping through the window I saw a line of houses with red neon signs which praised all kind of propositions and had funny names. I watched the "red zone" ladies, dressed or more undressed in narrow outfits, high healed and with decolltétes almost until the bellybutton. All hair colors and hair styles were represented and from skinny minnies to oversized elephants everything was available. Sometimes they discussed with a man and then disappeared behind the door of a house. What an awful profession, I thought, accepting all these man to earn money for living. The fats, balds, hairy, very young to very old, they all were represented.

As we drove very slowly so that we could see the most, suddenly a tall curly haired blond with a red mini dress knocked at the window. My boss opened it and she put her head inside to offer her services and discuss the price. While I had a wonderful view on two pink mountains I listened to the conversation with great attention. I had shrunk myself to the size of a little mouse. I don't remember the price or anything else of the discussion and  they hardly could accept the kind proposition, because I was in the way, but anyway they just wanted to have a look. They were both married, but this fact was sometimes forgotten.

When we had enough of our sightseeing, we drove to the city center and continued to celebrate our business success. This was the first time I have seen a red zone in my life. 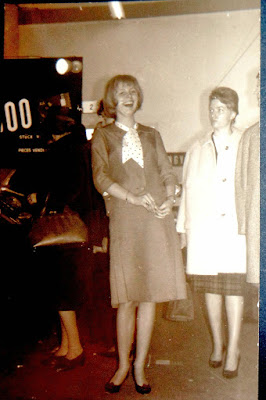 Me at the toy fair

Today I realize that I was probably the only 20 year old girl at that time, who had such an experience. 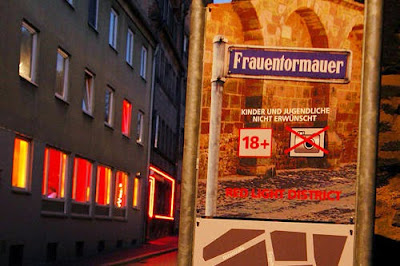 It still exists today, I found this picture on Internet. In Germany prostitution is legal and considered as a free profession just like a dentist or a lawyer. They also have to pay income taxes and have to undergo a regularly a health check up.

You look very happy. Not so the other person. I don't suppose the fair still happens now.

OH MY WORD! You use words so well! I just loved the ride through the "red zone" We've always heard about these places but not ever been. You look like you're having a good joke in the photo. I can recognize you there! Thanks for sharing! Jo

you always have such a fresh outlook on things

What an experience for a young girl. Just shows what an adventurer you were then and still are today!

Hi Gattina .. interesting story - we could get away with things like that back then ... how funny too .. and as you say such a good way to learn about life ... love the photo - cheers Hilary

I've gotta say, I would be curious too! When I had just turned 17, I visited my brother who was living in Holland... we traveled a lot and one memory was the red light district in Amsterdam. Our visit was during the day and it didn't seem to matter that a teenage girl was walking down the street! The women were in shop windows, with curtains they could close for privacy -- they were sitting and reading or knitting to pass the time between customers! Prostitution was/is regulated there too and they had to post their medical clearance outside the door. (I love your pic -- no cameras!!)

What an adventure, Gattina!

We have red zones in Singapore too. You are welcome to explore them, no need to hide. hahaha.....

Good post. I remember walking down a street like the one you mentioned when I was traveling in Asia.

That was some adventure Ms. Gattina! I am very much like you, strong willed and I would have wanted to see the red area too! I think that is such a sad life for young women. There are areas in Denver where you can drive (if brave enough) and see these women selling themselves. Very sad indeed.Great post and your photo from that day is beautiful, you look so happy! Very pretty.

What an adventure! If you hadn't been brave enough to go that day you wouldn't have this great memory...

Actually, I have a very similar story. While living in Catania, Sicily we drove down to an area that the Americans called "The Gut" as I recall. We were with another couple, so she and I ducked down in the backseat. Our husbands were in the front and as they passed the women we could hear them yell, "Hello Joe." They knew they were Americans. I guess the American car was a giveaway. We were all in our early 20's at the time. I don't know if it was legal there or not, but they were all out in the open.

Well, that was for sure an experience!!!

I would've done the same thing, Gattina, and checked out the Red Zone. You may have saved your co-workers from giving in to temptation. lol.
The View from the Top of the Ladder

What a lovely photo of you! That was quite the experience. You always amaze me with the stories of your life.

You have always been full of adventurous spirit! I would have wanted to see as well.