MY WEEKEND OF MARCH 14

As I had to go to my friend near Cologne, I did some shopping on Saturday morning. My flu seemed to be gone and I felt well. When I came back, Mr. G. didn't feel well and went to bed. At half past 12 he screamed my name. I found him coming out of the toilet, shivering terribly from top to bottom. I helped him to lay down on the bed, where it got even worse. He couldn't even hold a glass, it was terrible to see. I called the doctor. Told him about this shivering attack and he said I have to take him immediately to the hospital. As he couldn't walk, I called the ambulance. They came immediately, told me to stay home and took him away. 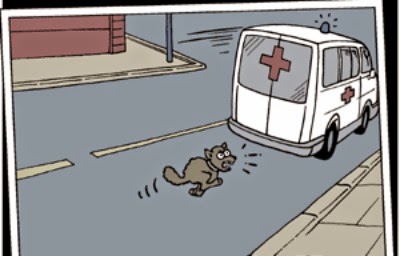 I stood there and watched the ambulance taking him away. Fortunately I belong to the people who don't panic I do everything what is needed as if I was another person. I raked my brain what to do now, do I have to cancel my trip or postpone it on Monday, or cancel completely ? My neighbor who had seen the ambulance called me, she was very worried. I told her what happened and that I didn't dare to leave him but she insisted she and her daughter would take care of him. So I watched some TV waiting for news from the hospital. Suddenly the phone rang and my friend was online. She told me that she has an inflammation at one foot and can't walk at all anymore. That solved my problems ! I told her I would come another time, when her foot is healed and that anyway I didn't really want to go. I canceled my bus ticket and waited for news from the hospital. At 5 pm Mr. G. called me and asked me to pick him up. I told him to stay inside the hospital, because he only had his pajama on and training trousers. Of course when I arrived he was standing on the street and it was very cold, only 6° (42 F) ! I was angry but he told me that he was fed up staying in the hospital and all he wanted was to go home. This was not the first time that he escaped a hospital ! Men !!

Once at home he didn't have anything anymore he ate like a horse, watched a movie and went to bed.
I still don't know what he had neither the doctors. He had passed all kind of tests ! I think he is not normal.

On Sunday then I had the aftermath of all the Saturday's events ! I really felt worn out. It was as if somebody had hit me on my head with a hammer. Mr. G. instead, had put his alarm clock on 5 am to watch the Formular 1 !!

I instead was hanging around recovering and answering the phone, all my friends and neighbors wanted to know how he was !

Now my one week holidays in Germany have to wait until my friend's foot is healed. It will be difficult to find another date where we are both available.

What a weird weekend for you. Mr G watching the big car race in my city, except I have escaped from the horrible noise and chaos.

Hi Gattina - I agree with Andrew .. what a weird weekend: but thankfully Mr G seems better or at least easier. Then even if the Cologne trip was cancelled ... at least it worked out - I'm sure you'll find another week sometime soon ... all the best - Hilary

Well, that was some (unwanted) excitement indeed! I hope you are feeling better and that you will soon be able to go and visit your friend in Köln!

Oh dear, sounds like with your flu, Mr G's illness and your friend's foot, the trip was doomed from the start. Hope you'll be able to rearrange it for when everyone is much better.

Oh everything seemed not to allow you to go exactly at the time you've fixed. I don't know but I sometimes listen to the universe. They sometimes connive to make things happen or not happen.

I hope everythings goes well for you, Mr.G and your friend so soon.

I hope Mr G stays well. I admire your calmness in an emergency. The ambulance s here usually take the spouse with them and then it is necessary to call a neighbor or family to come and get them.

am I allowed to say what a funny Mr G was. At least he i well to watch that Formula one.

What a weekend!! Hope you have both recovered from MrG's drama.

Those are the symptoms for shock. Generally you get them when you are badly hurt. Often in an accident it is the shock that kills people. It's very dangerous, but passes quickly and doesn't leave much damage behind. It can be caused by fright as it has to do with an over abundance of adrenalin.

If it happens again, immediately put a warm blanket on him and give him something sweet - preferably warm - to drink. If that doesn't clear it within seconds then he will need an IV. He was probably ready to come home within minutes of arriving at the hospital, except for them trying to figure out how he went into shock in the first place.

What a day! Luckely all is ok !!!! This is the principal! We are waiting for you for next school holiday! Can't wait!

I'm glad to hear Mr G is home and feeling better. That was a worrisome episode! Sorry about your trip, hope you can get it worked out soon.

I never realized you didn't go on your trip. But at least Mr G is fine !

I keep posting a comment and seem to delete it myself! I never realized you didn't go on your trip - now I know! I'm glad Mr G is OK! xx