MY WEEKEND OF JUNE 21

Another catastrophe happened to me with my bread making ! This time I had forgotten to fix the screw which kneads the dough ! I even had added onions. 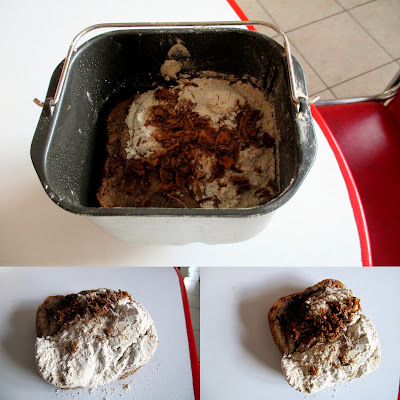 The result was a kind of flour covered brick with the onions sitting on the top ! Uneatable of course ! 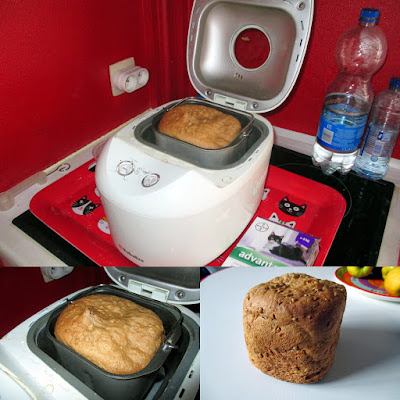 I had to make another loaf but this time it came out perfect !

My neighbor just in front of our house has important renovations done at his house ! 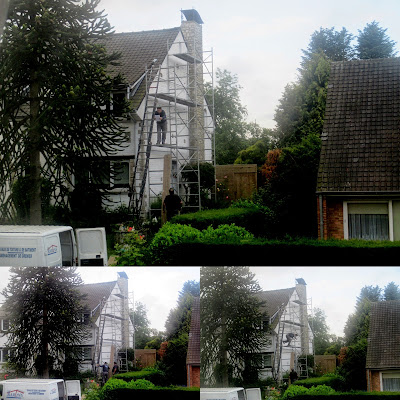 all bricks on this side will be taken off and meanwhile it is VERY noisy ! 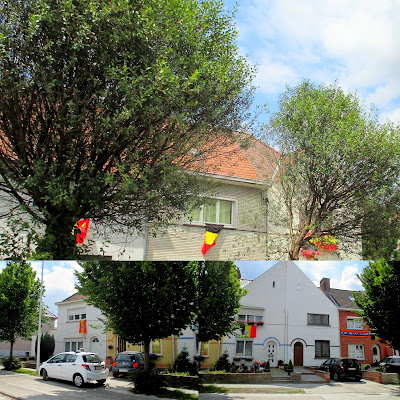 Saturday afternoon I went to Ilona, all houses around are decorated for the world cup, she  was the only one who hadn't a flag ! She doesn't like football just like me. We checked together what she will pack in her suitcase for our forthcoming trip to Cornwall on Tuesday ! The great day approaches ! 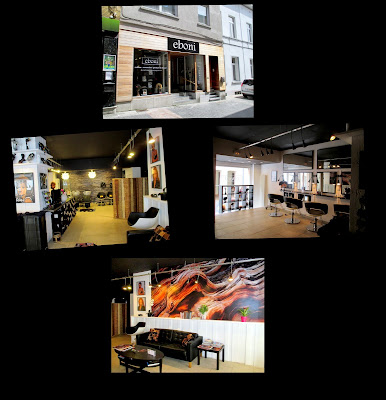 Before I wanted to see my son's friend's wife who had opened a new beauty salon ! Unfortunately she wasn't there but I was allowed to take pictures and found this salon very tasteful and beautiful !

On Sunday morning I went to the Brussels' midi market to buy some fruits and also found a nice cardigan for my trip.

In the afternoon we had a short visit from our son with family, they were in Waterloo because Toby's little friend had his birthday. 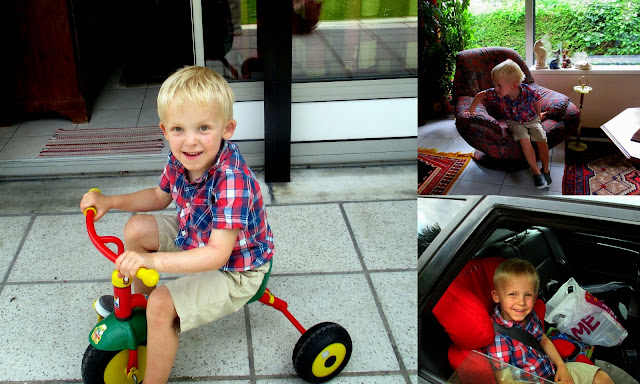 We we spent a nice hour together, and I am happy to say, that although he doesn't come here so often, he seems to feel at home.

The rest of the day I was busy with sorting out my computer and photo stuff for my trip !
Posted by Gattina at 06:30

OMW sorry about the disaster! Did you have onions in the second lovely-looking loaf as well? Sounds super! Grant won't eat bread made in a machine so I am about to hand-knead our two weekly loaves (mine is brown - his is white!) Toby certainly has changed. He reminds me of our little Elijah who is #4 grandchild. He changed completely from a toddler to what he looks like today (and he takes after Grant in looks and character) At least you'll be away next week while the neighbor does his renovations! Have a great day. Jo

That bread maker sounds a bit too tricky, think I'll continue to buy my bread from the shops.
Toby looks very grown up these days, did Arthur enjoy Toby's visit?
Enjoy your trip to Cornwall and take lots of pics. to share

lol I think its easier to do my hand at this rate.
I am not sure I would buy a bread maker.

I used to bake bread twice a week. All kinds. I loved to feel the dough. But now I weigh far too much and so I stopped baking.
Toby is growing so fast! He is a sweet and handsome boy now! No more baby!

Enjoy your trip to Cornwall. We were there two years ago and it was gorgeous. Make sure you try their ice cream made from Cornish clotted cream. It's delicious.

Glad your second loaf of bread turned out well.

We use our bread maker about once a month, usually to make bread to go with soup. Ours came with instructions to make jam, and I tried it once and it worked really well.

They do grow up fast, don't they? At least you're learning how NOT to make bread. You'll be an expert on that machine! The second one looks delicious!