I don't remember exactly when Mr. G started to speak in his dreams but I am sure that it was after his retirement. Before he had never spoken when he slept.

Not only he speaks but he does it the Italian way, with hands and even feet, knocks over the bedside table and the painting which hangs over his bed. The cats know that, so as soon as he switches off the light, they escape to other night quarters.

Strange is, I always thought when somebody dreams he would dream in his mother tongue, in his case Italian, but or he is a special case or it is normal, that when he talks or shouts in  French he usually fights with somebody speaking French, who usually are colleages he hasn't seen for 40 years at least. In Italian it mostly is an Italian family member or an old enemy, German when he is fighting with my father but not yet with me, this he does during the day. Sometimes the words are so clear that I learn a new vocabulary he usually doesn't use during the day, and sometimes I can't understand a thing. But this night I woke up because he spoke again and apparently he was quiet angry and suddenly he spoke English ! He said loud and clear :" I am here to learn English" ! When I asked him where he wanted to improve his English, he didn't remember anything. He is quiet a phenomena.

In his agitated dreams he also used to fall out of his bed, because he was saving an old aunt from falling down the steps,  only this aunt is dead since at least 20 years. I heard a big "boom" and  found him sitting in the middle of the room with the bedlinen nicely draped around his neck. Since he banged his head badly at the bedside table corner, I bought a barrier to protect him from falling out of his bed,  I thought he will break his neck or something else if ever he dreams that he is in a wrestling ring !

Now he only talks or rather shouts in 4 languages, as his voice has an incorporated microphone he wouldn't need any if he was a singer ! I should wear earplugs not to wake up, but I am far too curious to know what he says ! I am a woman after all.

A part from that he is a very peaceful man at least during the day. 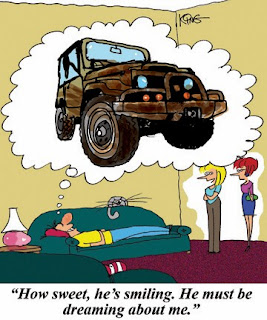 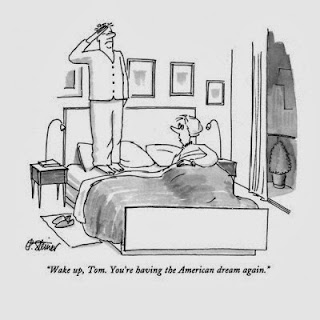 You are hilarious describing Mr G. I bet he doesn't read your blog. TOH used to talk in his dreams when he was young but not now. He used to speak in Swiss German and I couldn't understand what he was saying. maybe just as well.

Poor Mr G. maybe he should be in therapy to find the reason for these terrible dreams. Maybe he needs more cats to stay with him when he has bad dreams.
I have bad dreams too but only in English and I don't speak or fall about.
Perhaps knowing too many languages has scrambled his brain. Speaking only English has scrambled my brain.
I have no other advice to offer but my advice is free.

That is interesting.Sometimes in the middle of the night, I wake up like I am carrying a conversation and ask my sleeping husband So..
What else do you have to tell me and then immediately,I fall back to sleep.
In the morning I wake up and remember asking him this but he never hears because he is deep in sleep and I am not awake enough to wait for an answer. lol
I guess its due to an overactive brain working overtime.lol

Oh to be multi lingual and dream in different languages. I could almost dream in broken French.

This is interesting that when Mr. G dreams he often speaks in another language. I'm rather impressed that he knows 4. I would only be able to understand him when his dreams dictates his need for the English language. lol In the past, I have been known to speak out in my dreams and my husband who was either awake or waken would try to carry a conversation with me to see just how much I would talk back. One time, he was laughing so hard at me that it woke me up. Great 'D' post for today's Alphabe-Thursday assignment!

Oh, that is so funny! I think you are quite amazing to be able to live with such an active nightlife.

Lol! Linguistic :) This made me smile the way you describe Mr.G.

You make me thing, pierre had a dream, a few months ago, and he was a chaman and song so heigh!!!! I was affraid cause he's voice was frightening!!!

How interesting that he dreams in other languages. Do you do that as well?

That was hilarious. Men seem to enjoy talking in their sleep. Maybe it's because we don't let them say anything during the day ;)

You're so funny. I actually think Mr G is smart to know all those languages. But maybe not so smart to share his subconscious thoughts with you in whatever language ;>) (and also falling out of bed isn't so good, but I guess he can't help either one.) I'm also guessing Mr G doesn't read your bloG!

Interesting to learn about your slice of night life! My husband has occasionally let out a giggle in his sleep and he would Never giggle when awake. Love your cartoons♪♫ http://lauriekazmierczak.com/d/

Hillareous description of the sleeping habits of your husband. You should write a script for a movie. It would be very funny. I also suggest you place a second mattress on the floor next to his bed or maybe install a safety harness for him to wear at night.

so nice to know someone so well that you can tell what they are dreaming! Hope he doesn't hurt himself. {:-Deb

It sounds like his dreams can get quite dangerous at times...

I would have a difficult time not eavesdropping on his late night discussions in his sleep too!