WHEN CHRISTMAS BECOMES A DUTY

The definition of the word "Duty is a term that conveys a sense of moral commitment or obligation to someone or something. It's also something that one is expected or required to do by moral or legal obligation.

That's what often happens on Christmas. Children think it's their duty to celebrate Christmas with the parents and that becomes complicated when they are married or have a partner because of course you have to go to both parents ! I was lucky, in some way, because my Italian husband's family didn't celebrate Christmas as it is celebrated in France, part of Belgium (the Wallons, the Flemish copy the Dutchs) France, the UK, Austria, the Eastern countries and Switzerland. Nobody ever asked us to visit them in Italy it also was too far away.

Therefore I celebrated with my parents only , and nobody else. They never invited my Grandma for Christmas. My father didn't like her with his brother and sister he had broken all contact. As a child Christmas was very nice , but when I married it became different ! Christmas became a duty for me.

My parents arrived the car loaded with presents and my father unloaded very slowly so that the whole street could see how generous he was with his daughter. He had also told his collegues what things he would offer (my mother didn't count and was never mentioned) Often I knew already what he would offer, because some of the collegues' daughters were my friend. He was a man who lived for appearance and was convinced that he could buy everything. He always had to do more than his collegues or friends, he wanted to be the most generous father in the world. Love was not his thing.

My mother arrived, changed all decorations in the house and as I didn't agree, the fights started. She checked the house for eventual dust or dirt, and brought me cleaning stuff. This was the beginning of a very stressful "on duty" Christmas ! Mr. G. got long speaches of what he should do in his job, and my mother got angry because my father had told her that my cooking was better than hers. Everything was done to put things on the table and hurt each other. What did we do ? We escaped ! Once Mr. G. once me to my best friend who lived a few streets farer to rest and breath and then return to the "battle field". Our only concern was that our little son didn't realize the tension and had a nice and cheerful Christmas.

When I think back now of all these "on duty" Christmas celebrations, I regret that I didn't dare to tell my parents, that in our house we are the hosts and they the guests and not the other way around. If Christmas with us was so awful, why didn't they stay home ? Mr. G. and I once they were gone, were fully exhausted and he was hurt but never said anything. He could do what he wanted, it was never good enough for my parents and that, they showed especially on Christmas. Of course I was rather furious and hurt, that he never said a word, just to keep the balance and create some kind of peace !

Christmas celebrations became a nightmare for me for many years until they both died. I think this has marked me for life. I am always fearing Christmas, because I never know if I would be hurt again. 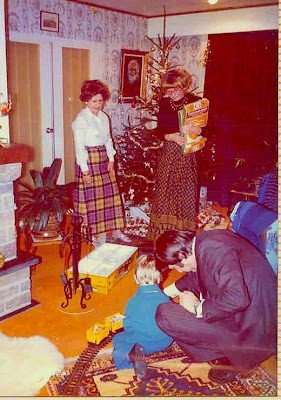 But I am not alone, many of my friends and lots of people live the same in this season.
Posted by Gattina at 06:00

OMW you echo the same feelings and experiences we had as young couples, with Grant's parents. I think your post has reminded many of us not to ever do to our kids what was done to us! For the past twelve years, however,we have been in Africa and too far to celebrate Christmas with the family. We were home for two Christmasses in 2008 and 2010 and they were super! This year we are back in East Africa for Christmas so all is well!
Hugs Jo

Christmas with the in-laws were always stressful, when we moved 2,000 km away and decided to celebrate the holidays on our own, the locals felt so sorry for us: all alone...little did they know how happy we were :) For the past 20 years for our family of 3, there is a small gift for each plus money for the youngster, I stay away from the shopping madness.

This si such a sad post but one lots of folks will understand. Christmas is not always the jolly time of peace & goodwill to all!

I think holidays are always stressful when you have large families.
You can't please every one.
So you please yourself. Drop by for dinner and then go home.Make visits short and sweet.

That is a sad story but as you say a common one. I must have been lucky as I only remember having happy family Christmases.

What tough holidays you had! Thankfully my parents come for the day and seem enjoy their time with us.

~ (A Creative Harbor) aka artmusedog and Carol ^_^

I am so lucky with my parents. Perhaps they would like me to come over (well, I know my Dad would want to kick his 90-year old neighbour out and move me in), but if I don't want I don't do! So, Christmas for me was never a duty. Besides I like spending Christmas my way: food that I like, playing music and films I like. My sister is coming over this year and apart from a visit to church and possibly work, that is exactly what we will do: food, music and films. I am looking forward to it already!

I'd hoped that dear Savannah would bring new and nice traditions for us. Now I learn I am not allowed to come on Christmas Day, but the day after. My feelings are very hurt.

Sorry to hear about that :( I know it must have hurt a lot.

I have had more than my fair share of rude people at my table and visitors who had no manners.
So for me all entertainment is a duty.lol Grin and bear it as they say.
When you visit you are always polite and gracious cause that's what your parents taught you to be and you throw up later lol
Life is not fair Gattina.

so sorry!!
I'm am very grateful I never had experiences like that!
sending hugs!

Sorry that you have such difficult memories associated with the holidays. I hope that time softens them, so you can enjoy Christmas a bit more.

I know there are many who find the holidays difficult, and I wish it were not so. I wonder if parents realize what an imprint they have on their children's lives.

This is sad Gattina -- you are usually such a funny and cheerful person, I think you have worked very hard to overcome a bad start. Congratulations for breaking free from the past! I can't imagine that Christmas with you would be anything BUT a lot of fun. Don't be afraid of it -- the past is past!!!

It is Difficult to let go of memories like these and build new ones...

Oh how sad for you!

I hope that this Christmas will be better, and that you will have JOY!