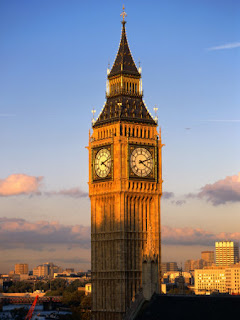 I was laying on the couch watching a little crime story from Agatha Christie on TV, while eating my appel pieces. I just saw a woman with short auburn hair sitting as me in front of the TV and she also watched a movie, but it must have been something more "intellectual" then mine, because I saw "Big Ben" ! I found it rather funny that I could watch a movie in a movie. Suddenly a shadow appeared behind the person on my screen, still watching "Big Ben" which bells now were ringing. I saw a thick cord and two hands and then the poor woman struggling while she was strangled.

Suddenly I heard Mr. G.  open the entrance door. I was surprised because I hadn't heard any ringing. Then he came into the living room fortunately not behind me and with no cord,  and told me that there was nobody. I looked at him with two question marks in my eyes and said, "nobody rang the doorbell". "Of course" he answered " somebody rang the bell" ! I looked at the screen in the screen where "Big Ben" was still ringing its bells and suddenly I understood !

Our door bell has the "Big Ben" bell ringing sound and he had thought it was our bell ! Meanwhile Big Ben had disappeared from the screen in my screen and I saw the woman's corpse laying besides the sofa...

Should I change our bell's ringing sound ?

Oh No! Now that was funny! lol

No, don't change your bell even though we will never know for who the bell tolls.It might be for you. lol

Really, how many times will this particular movie be shown? lol

But it does get eerie doesn't it when things like this happen.
That's why I keep dogs but then they fall into deep sleep and any one can come in.lol

I think if I didn't have dogs I would always sit on guard and that would be too stressful too.lol

No don't change your door chimes. I love Big Ben. Just watch a different movie, also push your couch against the wall so no one can creep behind you.

Hee hee that's so funny. I keep thinking the phone is ringing and then discover that it is on the TV.

What a fun and funny experience- I would say Keep the bell! LOL

Funny!!!! Don't change your bell, Gattina! Big Ben is the best bell you can have!!!I posted just a pic on my facebook profil, now! Just the bar we were together with my sister in Le Brusc!!! We had a relax moment there with Pierre before coming back home and dinning.