TAKE AWAY OR TAKE OUT !

When I go together with my friends to the "Jardin d'Asie" the (Asian Garden) Restaurant, I always order the same plate because I love it. It's noodles with vegetables beef and chicken pieces and it tastes delicious. I order a plate for me to eat in this lovely restaurant, but also the same plate for Mr. G. to eat at home in the evening. Therefore I always ask for a "Take Away" but it is exactly the same plate as I eat in the restaurant.(not to mix up with a "Doggy bag").

When I was in my 20 til 40th I loved cooking, it was a hobby for me. I always tried out new recepes or tried to copy things I had eaten in a restaurant at home. It didn't bother me spending hours in the kitchen. This time is long gone, now it has to be quick, good, and healthy. Fortunately we have quiet a lot of  "Take Away" restaurants in Waterloo not only Asian or chinese once.

The "Take Away" formular didn't exist since a long time at least that was what I thought and I wanted to know exactly since when it started. The dictionary gave me following information "sold for consumption away from the premises on which it is prepared a takeaway meal" Ok, that's true but since when ??

To my surprise I learned that "Take Aways " or "Take-outs" existed already in Roman times !!! So it is nothing new, Take Aways are just copied from the Romans ! 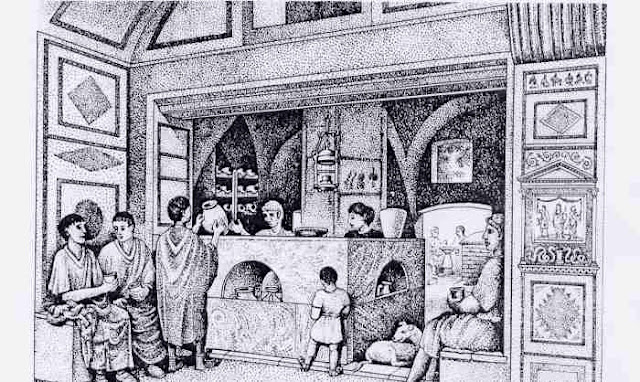 Roman "Take Away" (Take Out)

In the cities of Roman antiquity, much of the urban population living in  multi-story apartment blocks, depended on food vendors for much of their meals. In the mornings, bread soaked in wine was eaten as a quick snack and cooked vegetables and stews later in the day delivered by the food vendors.

Many of these food vendors catered to those who did not have means (!!!) to cook their own food, particularly single households. Unlike richer town dwellers, many could not afford housing with kitchen facilities and thus relied on "Take Away "food.

Apparently they didn't start their days with cornflakes, jam and rolls or sausages and red beans but with in wine soaked bread. What a nice joyful start into the day !

And also in the Middle Age, large towns and major urban areas such as London and Paris supported numerous vendors that sold dishes such as pies, pasties, flans, waffles, wafers, pancakes and cooked meats.

Now today it is the opposite, not everybody can afford to buy "Take Away" food every day, but we have all a complete furnished kitchen !

From now on I will not have a queasy conscience anymore when I order Take Away food, because I only do what the Romans did already long time ago, I just lock my kitchen and throw the key away, then I have a good excuse to always buy "Take Aways" because I have no kitchen anymore and can soak my bread in wine as breakfast in the morning ! In short a healthy cheerful life ! 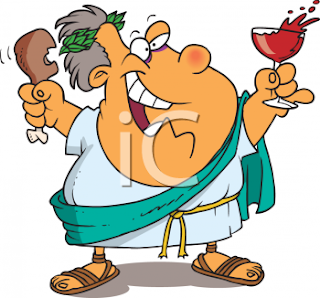 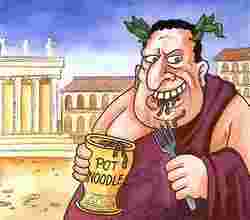 Interesting research you did there Gattina...and take-away may be as old as the hills (even older than me ;>)...but I sure don't remember it around here when I was younger. I guess it took a long time for the Pacific Northwest to become aware of it. Oh well, I couldn't have afforded it back when we had a houseful of kids anyway. But we sure do use it nowadays -- I cook sometimes, but not on every day any more!

I would like to lock my kitchen and only go in perhaps once a year with a duster. Not much variety in takeaway here, fish and chips or chinese. Great history lesson.

I like take-aways, but the idea of bread soaked in wine doesn't appeal.I'll stick with muesli.

I also like take-away, but I usually cook here at home.However nowadays, I'm alone with little Luna and I confess I'm not cooking, I take a good breakfast, maybe a fruit during the day and a soup or snack for dinner. Every time I'm preparing something to eat, Luna thinks it's also time for her to eat and yesterday, I made a sandwich and sat on the floor near that container cookies of little Luna and...we had lunch together! :)
Last weekend Cezar was here and I asked him to go out to eat "mussels and fries"! hmmm delicious!

I don't want to get take-out all the time: there's a lot more fat and sugar and stuff in it, than if I make it myself. Unfortunately...

I sure like take away foods! Unfortunately, there is only two in this town. McDonalds and a Pizza place.

I didn't realize they had been around so long.

Take out isn't much of an option out here in no man's land, but I do stop on my way home once in a while for Chinese food, my fav!

Now the kids are grown I seldom cook
My husband munches all the time and my son is never home so he snacks when he gets home.
Sometimes I cook but then it's mostly me that eats and so I agree
take home is much better for the price it costs to cook at home.
How ever I made a salmon with rice/quinoa, and squash and fed three for under 20 dollars with left overs for the next day.What I should do is make these dishes and put them into pyrex and freeze them and then just warm up when it's needed.

These are truly good news! Not that I don't like to cook, quite on the contrary. Thank you for sharing these 'news'.

or as they say in Chile...para llevar...to carry. Take away is good, especially when eating alone. I hate sitting in a restaurant by myself...I don't mind eating alone. I just don't like doing it in public. Quirky me.

We do TakeOuts and Doggy bags here. I had no idea where it originated from. Thanks for sharing that~Ames

This was quite fascinating.

I never knew the origins were from that long ago.

It certainly makes it a lot easier...

...and no kitchen to clean up!

Thanks for a terrific link this week.