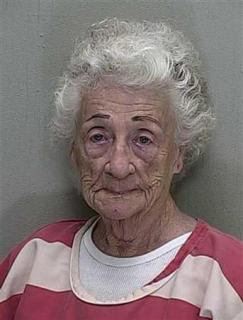 Authorities say after her 53-year-old neighbor refused, the central Florida woman aimed a semi-automatic pistol at his house and fired four times.
What a naughty neighbor !

Bride Orders Giant Wedding Cake Shaped Like Herself
Do you take this bride, to have and to hold -- and to eat?

A wife renewing her wedding vows after 10 years of marriage ordered a cake that looks just like her.
I hope she was quiet big

An immigration officer tried to rid himself of his wife by adding her name to a list of terrorist suspects. As a result the woman was unable for three years to return from Pakistan after travelling to the county to visit family.
At least this man was very creative to get rid of his wife !

Police in Georgia said they arrested a man who allegedly followed a woman around a Kmart store while filming her backside.
Must have been an interesting view
Posted by Gattina at 06:00

And the sad part is, they all made my local news report. It shows you that not much happens here in New Hampshire, so they have to report these silly things!

Some people will do anything for publicity;-)

That lady must have needed a kiss desparately.

All this proves my theory; the world is indeed a strange place.

now those are weird stories. People are crazy.

Some people go to some lengths to get into the news.