THE MOST FAMOUS NAGGING WOMAN

Words starting with X are not easy to find ! After a brain raking of several days suddenly I found one ! Xanthippe ! The reason was because I met one lately. I remembered that women who were always jalous, arguing, and bad tempered were called "Xanthippes". I must have slept during history lesson because I only found out now thanks to this theme that she was the wife of Socrates whose name rang a bell in my mind, a little left over from school. He was a classical Greek philosopher credited as one of the founders of Western philosophy, whatever that means.

Xanthippe was a nagging, peevish, irritable, quarrelsome woman and wife. Nevertheless the couple managed to produce three sons. Apparently Socrates knew he was marrying a hag, but he did it on purpose to practice his patience ! A rather strange method in my opinion. But I am not a philosopher either.

Sokrates married Xanthippe, when he was nearly 50 years old. She was much younger than him, perhaps by as much as forty years. Apparently already at that time famous man liked to marry much younger women. Up to this date, he had avoided a marriage, and when asked someone his advice about marrying or not, he usually answered:

''Do what you want, in this or the other case, you have to repent'' or "Marry or marry not, in any case you'll regret it".

A well known anecdote about the angry Xanthippe is the one where she was so furious with her husband that she threw a bucket of washing water on him.

The philosopher then replied: after thunder comes rain.

She must have been quiet a woman that she became so famous thanks to her bad tempered character. Today to become famous you have to use other means ! 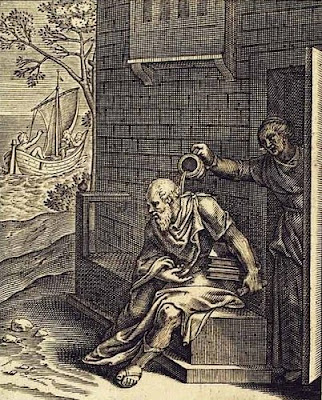 My bucket would have been bigger !
Posted by Gattina at 06:00

Lol That's funny . buckets of washing water would be quite refreshing . Socrates seems to have accomplished what he set out to do for his reply: "after thunder comes rain" is something to be admired.

I've never heard of Xanthippes, so I must have missed that school lesson too. Thanks for the history and philosphy lesson.

Oh how I wish I knew more X words when I play scrabble!

Interesting post! Whew! Who knew!!! Throwing wash water on your husband can get you into the history books?...too funny!
Happy X Day!
Coralie

This was a great X word, and such an interesting post!

She was probably all cranky because Socrates was not fulfilling her in the bedroom.

Ooooh another fabulous word to add to my dictionary! Love it! Thanks for the cranky post!

Your bucket would have been bigger - LOL. I had not heard about Xanthippes. Interesting information. At least her bad temper ensured she will never be forgotten.

Great minds think alike. Check out my take on Xanthippe (#50) for more of the story.

You know I think my bucket would have been bigger too! I didn't know that story and will try to nag less.....on the other hand....I might not :)

Love this history lesson and will plan on learning how to spell and pronounce Xanthippes...a great word to add to one's vocabulary!

So funny! I love that bucket of water.

Wow! I feel as if you were writing about me!

Of course, then again, maybe it's not so easy to live with a philosopher!

Well done - although I don't think this one will make it into every day usage.

Hmm....it would have been so much nice if my ex-husband had called me Xanthippe (Xanny for short) instead of all the other names he used! ha!

I've heard this term before (but not really from the ex)

Thanks for a fascinating history lesson and reminder of a word that I shall use when I need to be obscure about my 'real' opinion of someone nagging me too much!

I always smile when the link opens to your blog. I know you will share something cool. It's like opening a present!