TATTOO OR NOT TATTOO

I have never payed attention to tattoos for the simple reason that it wasn't very well seen in Belgium or in Germany and a tattooed person was considered as rather vulgar.

So I was quiet surprised the first time I went to Egypt to see lots of British tourists more or less tattooed. It was the same for women and men, and they weren't the youngest once. They were all people like us, retired and stemming from the 60th/70th. When I asked why they all had these tatooes I have been told that it was very in fashion at hippie times End 60th and in the 70th in the UK and it was considered as very "in" ! I knew immediately who was English, because of the tattoos, no other tourists had them and ... they all regretted !

What probably looked nice when you are 20 doesn't have the same effect when you are in your 60th or 70th, put on some weight and lost your hair. Once a beautiful fresh little rose on an arm now looks rather faded, a snake has more wrinkles as usual and the once probably big and strong man who has "I love mom" tatoeed on his shrinked muscles looks rather ridiculous.

Some women were a little upset because their husband still had a heart with an arrow somewhere on his body, with a tattoo "Mary forever" but his wife's name was "Sue". You never know if it's forever !

Amongst my friends only one has a little rose tatooed on her shoulder, but even that, now at 67 looks rather ridiculous and she tries to hide it of course.

One thing is sure, when you are 20 you never think how you would look like at 60 ! and it is very hard to get rid of these "youth" souvenirs.

Originally tatoos hadn't been a fashion and exists since the New Stone Age beginning about 9500 BC they were used to mark the tribus or communities, to which people belonged to.

Today, people choose to be tattooed for cosmetic, sentimental/memorial, religious, and magical reasons, and to symbolize their belonging to or identification with particular groups, especially criminal gangs.

When I get into my third (or forth) puberty, maybe I will get a tattoo too, I only don't know yet what ? 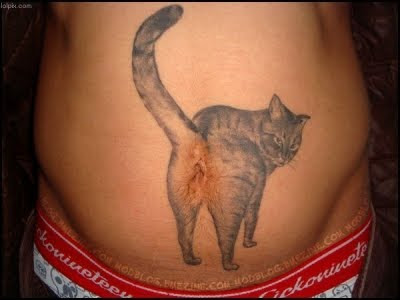 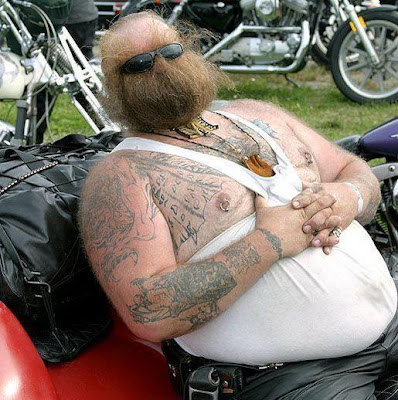 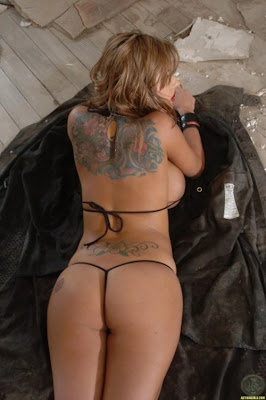 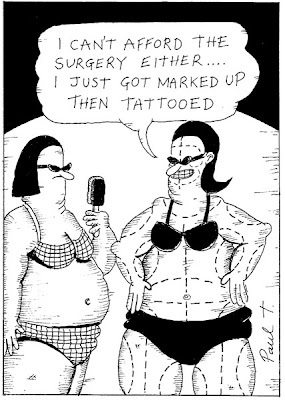 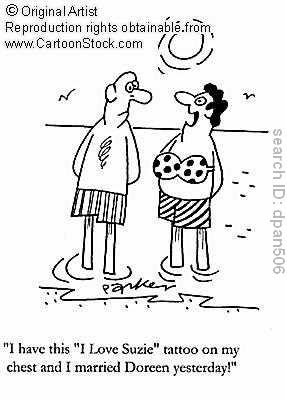 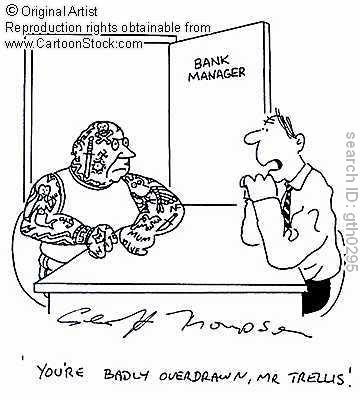 I was always such a coward I haven't even got pierced ears so no tattoos for me. The poor young girl with the beautiful body never imagines she will be different one day.

I not into tattoos also. I don't fancy piercing the skin with something that is permanent.

Aha, Gattina. I have no tattoos, won't ever have either. My dh on the other hand, has many on his arms and chest. I don't like it - the wrinkles get worse every year, I agree but I've learnt to look past the pictures! He even has my name "Jo" in Arabic script, on the top of his right arm. I checked: it is my name. LOL! Always interesting the different reactions the tattoos evoke! Have a great day. Jo

Ooh, I must be vulgar then: I've got a tattoo! I got one last year of a little orange tulip and I hope to be able to add a little maple leaf before long!

What a tricky question!!! I think I err on the side of "not", though do have one... foolish youth! That cat tattoo is just too crazy!

It sure is an unusual fashion statement as it is permanent where other fashion trends come and go, but tattoos never go but you can't tell that to those who want to be tribally fashionable.

I've never thought it a good idea to do something that permanent. Lots of health risks involved in getting them as well. Loved your picture choices!

That cat tattoo is hilarious! I don't like tattoos, either, but more and more people seem to have them. I can't help but wonder what my grandmother would have said. LOL
-- K

I haven't a tattoo, nor have I ever wanted one. At 66, I think I can do without. As a forensic RN for 21 years, I've been to several very interesting presentations on gang tattooing, one done by a former LAPD officer, now forensic MD with incredible photos of tattoos among the gangs of Los Angeles.

I don't like tattoos either but I have a piercing on my nose , that's it .

I don't think I could take the pain you go through to get a tatoo. I do like the removal tatoos JDaniel gets.

Hilarious as always :) I know what you mean about tattoos on older people - they do not look very nice.

I really don't like tattoos - I work with a population that is heavily tattooed, so I see it as a very anti-social thing. That said, my DIL has a tattoo on the small of her back - it was hard not to gasp when I saw it!

I will pass on the tattoo ... i express my individuality just by being me ...

Today when I look at some people I think when they die, they will have to be skinned and put into a frame on a wall so people see their grand father and grandmother's art work designed on their own skin.
As each person dies so does the artist and we know how their work is always on display and bid on. lol
The whole thing is not very pretty.
I wouldn;t do it. I tell my kids I created you with perfect bodies and if God wanted this stuff on you he would paint it on himself. lol

I would never ever get a tattoo. Our daughter-on-law has one on her abdomen--a gecko--and when she got pregnant with twins, it turned into a giant prehistoric thing!

I think it's kind of a generational thing. I wouldn't have one, but my daughter in law has a really sweet little one...

wise words.
your cartoons are humorous.

I am trying soooo hard not to laugh at that last cartoon. I have dry socket and smiling kills my face, much less laughing.

I think these exact same things about people with tattoos.

The cat one was awfully funny, too.

Thanks for a terrific link to Alphabe-Thursay ths week.

You are a gem.

Hilarious! Hm... Maybe one should tattoo away the "love handles"...? *giggles*