13 stops and views of the South of Morocco

1. Marrakech,known as the "Red City", is an important and former imperial city in Morocco.

2. Ouarzazate, the Holywood of Morocco, where amongst others "The Mummy, Gladiator and Martin Scorcese's Kundun were shot.

4. Aït Benhaddou is a UNESCO World Heritage Site and several films have been shot there, including "The Last Temptation of Christ" "The Sheltering Sky" "Kundun" "The Mummy", Gladiator and Alexander

6. Zagora, a well known town with a sign at the town border : "Tombouctou 52 jours", the supposed time it takes to get to Timbuktu, Mali on foot or camel.

7. a sunset in the Sahara on a camel

8. Erfoud, also is a popular destination for filmmakers because of the beautiful views of the Sahara Desert that the town's location affords. Desert sequences in the 1999 film The Mummy were filmed in several locations around the town, including the inside of a dormant volcano.

9. Tineghir is a town in eastern Morocco, in the Atlas Mountains

11. Villages were time stood still since 2000 years, but have here and there a TV antenna

12. the "blue men" Berbers who live in the desert 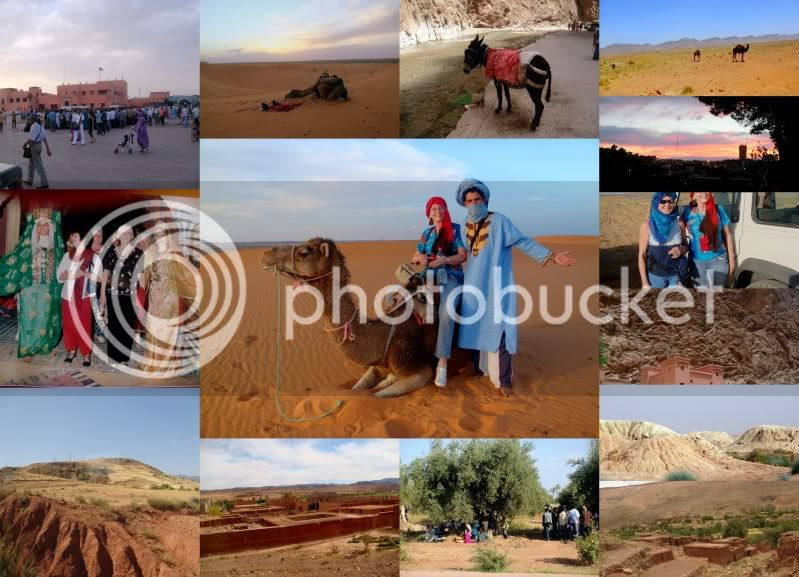 hello gattina
the Second Season of blog idol just got started
you can cast your vote on my blog through the poll survey
the survey will last up to three days hope you can take time to vote for the strongest song choice
have a great day and happy blogging!!!
hope to see you there!!

A place I'd love to visit one day. Great photos.

Gorgeous photos! Morocco is a beautiful country. Happy TT to you!

Great photos. It looks like you had a fun time. Happy T13!

Thanks for sharing. Happy TT!

Look at you with Ahab and the camel! LOL! CUTE picture! And I love those colorful outfits the women are wearing!!! These are wonderful 13!

It all sounds and looks so exotic. Did you know that we had camels here in the Blue Ridge Mountains pre-ice age?

PS is that a harem you're in?!

This is somewhere I have ALWAYS wanted to travel. I love the pictures. Thanks!

What an adventure! I hope to live that one day!

I think I need to go visit myself.

Fantastic scenery! So different from over here! Like another world :-)