Late afternoon today I am sitting in the Eurostar, the train which will take me from Brussels to Ashford in the UK in only two hours. The train runs at up to 300 kilometres per hour (186 mph) ! From there I take the train to Eastbourne at the South East coast of England spending a week with my friends who live there as I do each year.

For me it was a great event when on 14 November 1994 Eurostar services began between Brussels South railway station and Waterloo International station in London. My son lived in London at this time and it was so easy to go by train and not waiting hours at the airport. Since two years St. Pancras International has been chosen for the Eurostar stop in London, which I still don't understand because Waterloo station is much closer to the center and has far more correspondance possibilities. But why make it easy when you can make it complicated.

I took the train for the first time 10 days after the opening and found it very exciting to travel under the sea ! Imagine all the Ferry Boats, Cruise ships and others just swimming over your head ! Lots of people are still afraid to take this train, the idea sitting so deeply under water is scaring them. I think flying in the air is not better.

The construction of the physical tunnel began in 1988, and was finished five years later, in 1993. The Channel Tunnel used by Eurostar services holds the record for having the longest undersea section anywhere in the world, as well as being the second longest tunnel. 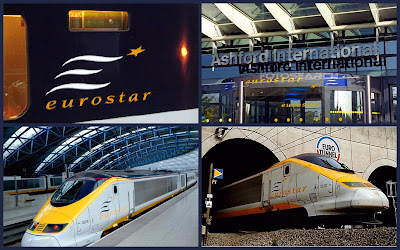 The Eurostar and Ashford train station 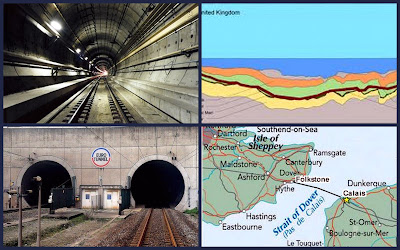 these are the two main tunnels and one emergency tunnel 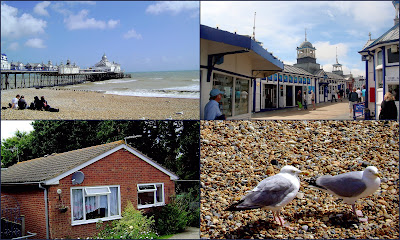 and when I arrive I will be here for a good week, at the see, waking up with the screams of the seagulls !
Posted by Gattina at 06:00

Great behind the scenes photos and descriptions of the Eurostar. It is mind-boggling to think of that undersea construction. I still want to travel in it. A year or so ago I took a ferry from Dover to Calais but it didn't measure up to a Eurostar trip, I'm sure.

Have a great time with your friends, Gattina. What a nice tradition you have going.

Oh, I do love the Eurostar - joining the UK to Europe! Enjoy your week in England.

I'm sure you will have a great time. I took the train from Paris to London in 2004 and it was really such a experience!

Ooo the train. Have fun my friend. :) Love all these photos :)

Blogtrotter Two is back to the sea... ;). Make the most of it and have a spectacular week ahead!

I love riding trains and used them for traveling almost exclusively while abroad. i've experienced the Eurostar from London to Paris too, it was such a blast.

Mélissa took already the Eurostar and was very satisfied of it. She says : "you are in a tunnel and not for a long time". Technology is fabulous! It changes our way of life! Like you I don't understand the choice to change the arrival.
Mélissa will fly to London in a few days and ask to you about the weather. She must do her bag a,d I think she will have to bring a little sweeteries for the evenings.

I love the Eurostar, shame they moved it from Waterloo! The reason was that there wasn't enough space in Waterloo for the Eurostar and the other highspeed lines, so they moved them all to another location. This summer, the old Eurostar platforms at Waterloo are being used for a railway-themed play.

BTW this is the reason why we didn't take the train last weekend. Not all cities have train stations!

Going from the coast to Croydon is probably the easiest route you can do on a train - or car, for that matter, as you don't even come close to central London.

I enjoyed your history lesson. The photos back up your story. Thanks for sharing.

I know you enjoy your holiday in england every year so I'm sure you are in for a good time. The eurostar is a fantastic train. We have been on it a few times.

I love trains! My favorite way to travel and this one sounds/looks awesome! Love your photos and all the information you included! It is indeed mind boggling to think about the undersea construction! Great post for the day, Gattina! Hope your week is going well!

The trains looks like toy trains coming out of a tunnel. What a great shot. Enjoy!

Enjoy your week in England. It's great that you don't have to fly to England. Wish we had a tunnel from here to mainland Europe.

terrific photos. i enjoyed my train ride from Paris to London--can't remember now if it was a Eurostar, too.:p enjoy your vacation!

How wonderful! I hope you can keep in touch with us in the Blogosphere. It seems tomorrow Anneliese will have her puppy!

That's one of my goals...to travel on the Eurostar...after meeting up with you and having a coffee, of course...lol!

Yea... we've talked about this before... I can't even IMAGINE me getting on that speeding bullet! I suppose it COULD happen -- but it would be a MAJOR miracle!

Today we found out my grandbaby's gender! We will BOTH have grandsons!!! And they moved his due date up to December 24! Christmas Eve! (of course, that just means he will come 4 days late and still be on the 28th!)

I hope to travel the Eurostar train some day. It is much more attractive than flying.

Train service in Canada is dreadful. You would think a country as large as ours would make the tain an essential service.