ON THE TRACE OF MY YOUTH - QUEEN 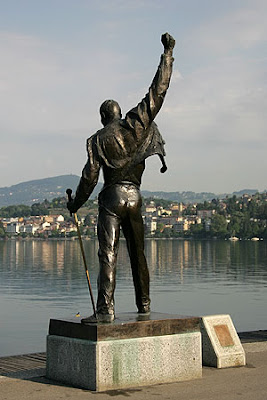 When I read somewhere that Gary Mullen and the Workers performed in Brussels "One Night of Queen" my friend Ilona and I litteraly "jumped" on the occasion to go to this show and see or more exactly hear Freddy Mercury again. And we weren't disappointed, the show was absolutely great.

Garry Mullen not really immitated Freddy Mercury, he sang all his songs and in a real perfect way, he also moved the same way as him, but and that made the show special, he managed to keep his own personality. And the public went mad !

We both found our youth again, Freddy was part of it he was only 3 years younger. The public was composed of three generations. Like us, the same as Freddy, our children, and their children. Ilona and I both stated with satisfaction that we belong to the first generation in history being copied in music but also in fashion by their own children. Or honnestly would you have copied the favourite music or fashion of your father or mother if you were born in the 40th or 50th ?? 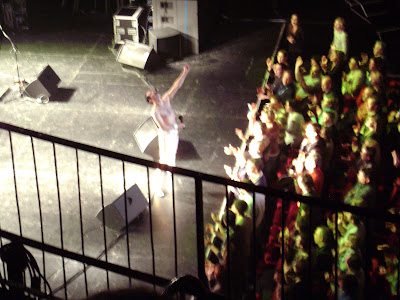 I also did this video, unfortunatley the sound is not so good, but at least it gives an idea of his voice.
Posted by Gattina at 08:29

GREAT!! I am so glad that you and your friend had a great time. It is always fun to see someone that we have always liked. Sandy

That Freddie Mercury statue reminds me of that huge edifice they floated down the river Thames of Michael Jackson (maybe you wouldn't have heard of this particular stunt being across the North Sea...)... but it was done to promote Jackson's "History Vol I" album...

(actually I heard the "disc II" ~ of new material with songs like "Stranger in Moscow" and thought it rather good...)

Hope all is well with you Gattina... have a wonderful weekend!

Super video Gattina! I remember now my first parties dancing under the voice of Freddie Mercury!
and my Melissa is in a party tonight where she will dance...Luckily the parents of her friend will take them at 3h30 in the morning. Have a beautiful sunday!

What a FUN evening!!! Great to get out and see someone you really enjoy! And even BETTER to do it with a good girlfriend!!!

I wish I knew him. The video did show his good voice. Not so clear though but good enough.

Cool! What a great show to see.

Oh, that's great. I remember them well too even if they were not that "in" when I was young. A very special sound!!!

Though when it comes to fashion I wish they could stop copying and try to come up with something really new (or copy the 18th century!), I'm tired of the fashion during my life time.

Hi Gatinna,
Sounds you all had a great time!
Thanks for the video!
The statue is amazing too.

Have a pleasant weekend.

Wow, he is very good!