On Monday I decided to go to our Smartphone provider and have Mr. G's senior smartphone reactivated because he couldn't remember the codes and password. 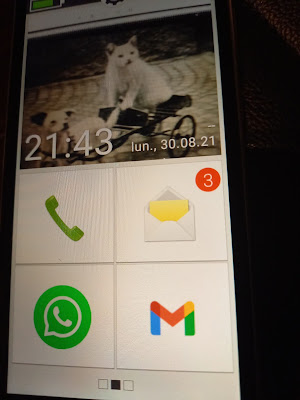 What a story ! The employée told me that "Monsieur" has to come personally and show his identity card. I said that he is in hospital and can't move (wasn't true of course) then he answered, "we can't do anything". I asked him to come with me to the hospital which of course he refused. I proposed to come with his identity card and then he could activate the mobile. For that he said I needed a letter from his doctor that he is unable to walk and I have to have an official paper from the city administration that he gives me authorization to act in his place ! I thought what an idiot ! There must be another solution to activate the phone !

I proposed to cancel Monsieur's  phone number and give me another one with my identity card.  He said that it was impossible. I didn't understand why and before I killed him I left.

The next day I went back and this time it was a different seller. I told him that I want the phone in my name with a new number. He at least did it right away and there was no problem ! 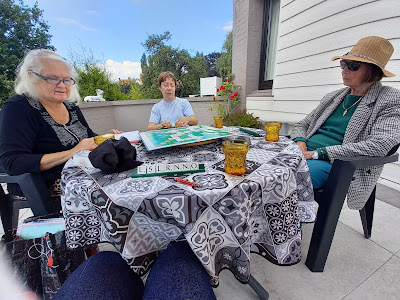 It had gotten warmer and we could scrabble on Nicole's terrace. As always, we also solved all political problems and others of course  but nobody listens to us.

The next day I spent explaining the smartphone to Mr. G. I had made a drawing and indicated exactly which key he was allowed to use. He tried twice and it worked. Satisfied, I took the dirty laundry with me and drove home.

The next morning I wanted to try it out and called him on the new phone, but of course he had done something and the thing no longer worked.

I have to find another solution  as he needs Whatsapp to receive calls from Italy and Amsterdam. 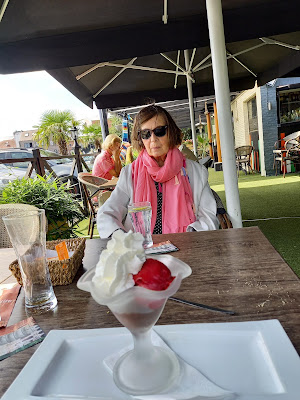 Nicole still looks great with 82 and a brain cancer ! She is just amazing and fights like a lion.

The week ended with beautiful sunshine and we went for lunch in our Italian restaurant. We sat on the terrace under palm trees and felt like we were on vacation.

Then the two came to me and we sat on the balcony and drank a cup of coffee. An apartment just like mine is for sale in my building and now Myriam is thinking of selling her house and possibly buying the apartment here. That would be fun if we became neighbors. 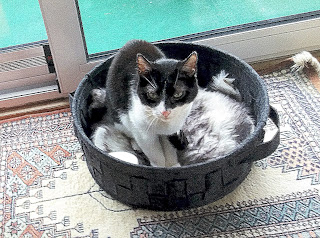 Rosie too enjoyed the sunshine but inside !

That does sound like fun to have friend as a neighbour. I had the same problem getting a suitable phone for my mum. Good luck!

Aside from phone tech issues, it sounds like you had an ok week. I wonder if having a good friend also being a neighbour is a good thing.

The story with the smartphone sounds crazy. Hopefully,"all's well that ends well."

Sure hope you can get your husband's phone situation figured out. YIKES what a rude person that first man was!

Outside dining is always a fave with me. I hope and pray your friend's cancer gets healed up.

How fun to have a friend as a neighbor!

That first clerk deserves to get fired.

Here in the US, they have a legal document called "power of attorney" which lets the person who has it take care of some decisions for a person who is in the hospital or a retirement home, etc. Do they have something like that there? Might make some things easier. I'm glad you got a better smartphone helper the second time. Hope Mr. G. gets the hang of it. That would be neat for your friend to become your neighbor.

Wow, the hoops you ha/have to jump through to get what's needed in the line of tech things...all in the name of privacy, etc. Phooey.
Why can't peeps just believe you at your word anymore. I guess its a case of the one rotten apple spoiling the barrel.

Hope Mr G will be able to use that new phone. Maybe you need to alert the staff to help him take a call when you call him...and prearrange times for the others to call so you can help him. We do that a lot where I work. (Nursing home)

I do hope you disposed of the tech's body properly. At least the second employee was better about it--and didn't die! There must be a way to make it possible for Mr G to only use a couple of apps and buttons on the phone.
Your Scrabbles and lunches and coffees with friends sound like fun. I hope Miriam does move in near you--It would be great to have a friend as a neighbor.

Funny how different people react differently to people seeking solutions. Looks like you got a wiser helper the second time around regarding the phone. I know of someone in a care home who found their cell phone too confusing so went back to a simple landline. I wonder if that would be a solution.

It,s great to see you spending time with your friends. It would be nice to have Myriam as a neighbour. It must be frustrating for you and mr G with the phone problems. It must be hard for him.