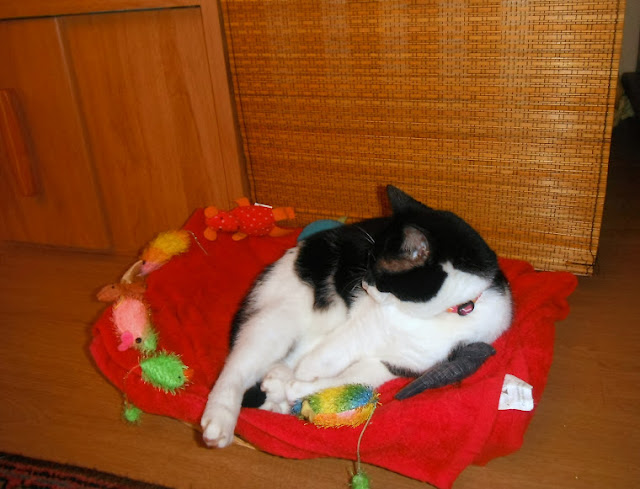 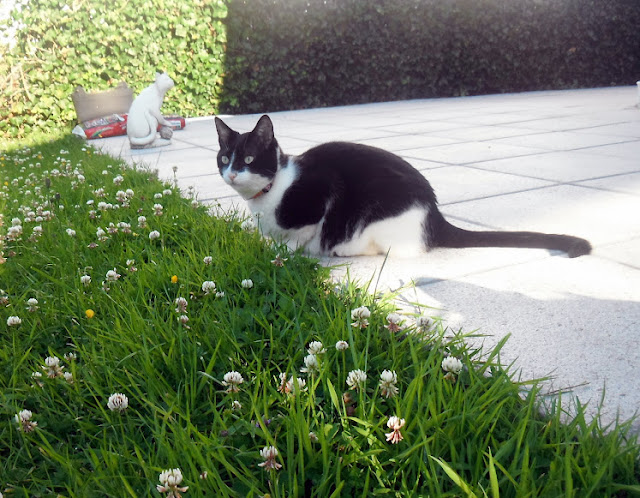 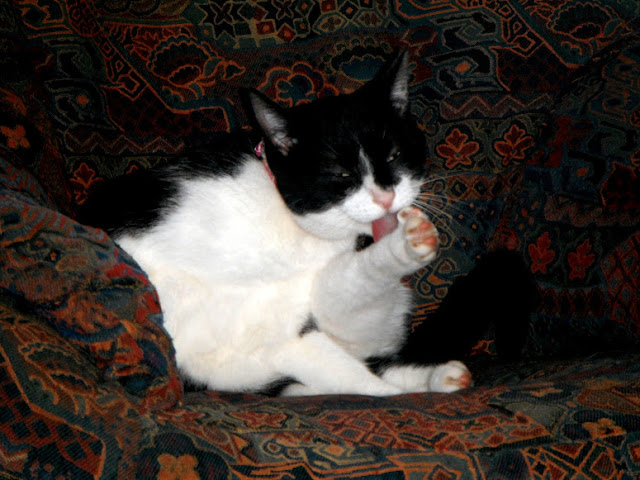 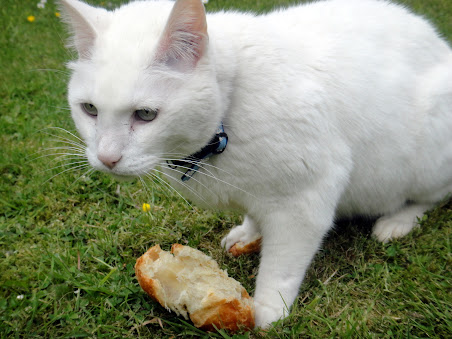 Due to the cold and wet weather I decided not to move and make a computer work and beauty day. I also watched two little crime stories, but in the afternoon I realized that I needed batteries for several devices and also a little table for Mr. G. on which he can put all the decorations he had taken from home to his new residence. 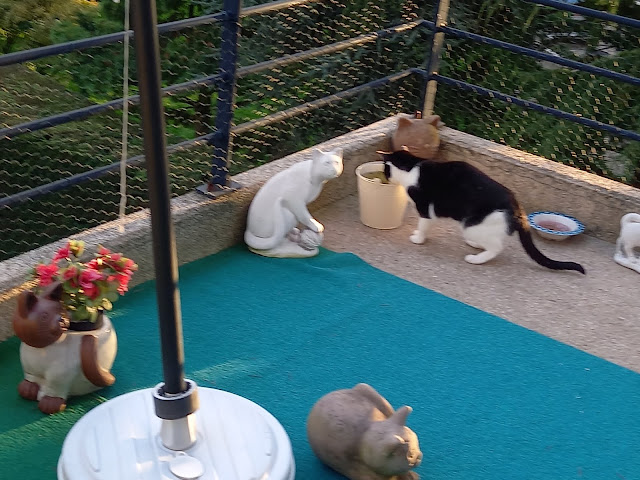 Rosie was happy that it had rained so much because then she could drink the rainwater in the little bucket and a bowl I had put outside.

I tried to call Mr. G. who didn't answer, so I called the reception and it turned out that he hadn't charged his phone, at least I knew that he was OK.

From my living room I love to watch the skies and as I had my new phone I thought I will try how the camera works.  Compared to my old smartphone there was a big difference and that's why I didn't do a lot of pictureswith my phone,  I used my camera. Now I don't have to take it along anymore. 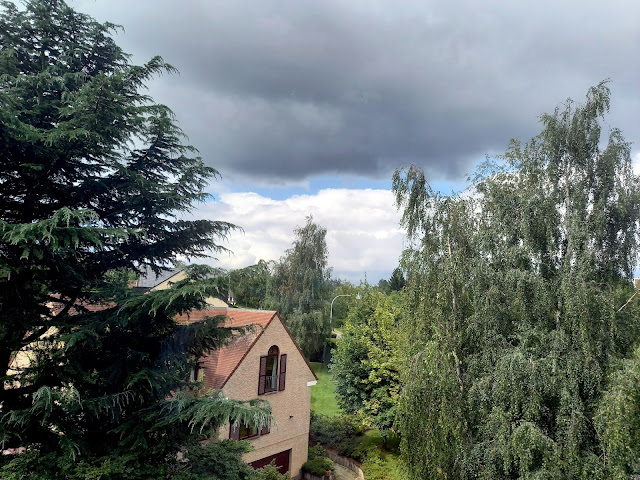 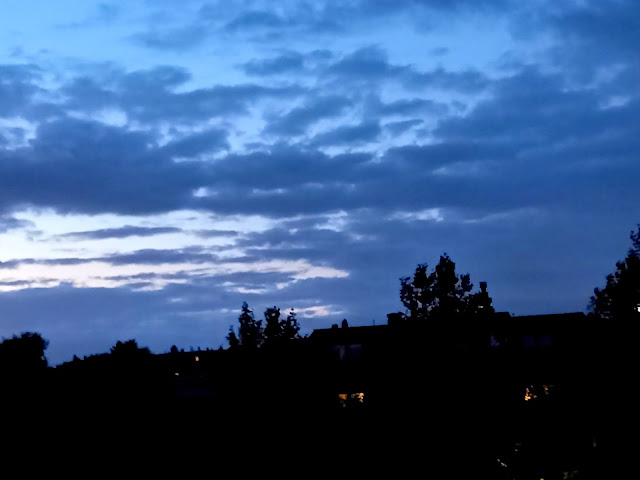 Sunday three of us intended to go to the Waterloo annual flea market with a parade of Napoleon's soldiers and an orchestra, but when we saw that it was only 17 ° and very humid, nobody wanted to go. Instead I went to Mr. G. to check his phone and tidy up his wardrobe. He wasn't too well and had difficulties to deal with the remote control. There was the Formular 1 on TV and I helped him to find the channel !

On my way back I stopped at Nicole's and found Myriam there and we had coffee and cake and chatted and told each other next year there is the same festival hopefully with August weather and not winter temperatures.

When I came back I saw from far a huge crowd walking on the main street, which was closed for cars and I could hardly believe that so many people were there. But on the other hand we had been prisoners for so long that now people rush to all events they can get. 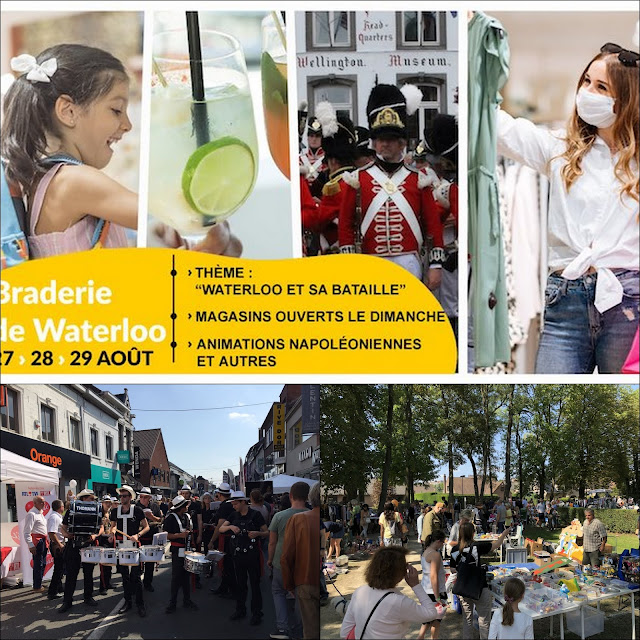 Obviously the pictures had been taken two years ago when there were no masks and sunshine ! Only the poster is from this year. But the crowd I had seen from far before turning into my street was the same or even more.

I hope that Belgium continues the way to deal with the virus, we  nearly have our normal life back. More and more people now agree to the vaccin. School will start on Tuesday which will bring back a lot of traffic. 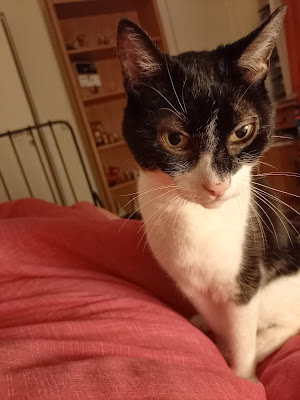 Rosie was my model to try out my new phone, but she forgot to smile !!

School started last week in the region I live in. A bit noisy in the morning as they come and in the afternoon when they leave, but otherwise it's fine (I live across a school).

The photos taken on your phone look good. The weather is unpredictable here as well and is cold for August. Let's hope for a mild Autumn.

The idea is to try and live with the virus.We'll have to see if the virus accepts our plan. According to a doctor in one of our hospitals, so far he's not willing to do so.

It is good to not have to carry a camera. Rosie looks a little puzzled by the camera.

The photos look good and are of a very high standard. So much easier if you don't have to carry your camera as well. Shame about the weather, here's hoping for a mild Autumn/Winter.

We still like the photos with the DSLR camera so much better than phone photos but it is handy to take phone photos when we are out and about sometimes.

Aww on the kitties. They are such wonderful companions.

I'm glad you got out for a bit though. We've all been locked up so long that we just want to go places and feel normal. I'm not so sure that will ever happen again.

Have a fabulous Awww Monday and week, Gattina. Scritches to the precious kitties. ♥

What a really fun time you had this weekend. Hi Rosie

The evening sky looks quite dramatic.