Monday my hairdresser came and cut my hair which had grown quicker then usual ! Mr. G had spent  his weekend at the hospital and seemed to be quite satisfied. That changed on Monday evening when I called him, he wanted to come home ! I told him that it was impossible and that's not my decision but the doctor's.

I tried to recover from the last stressing weeks and only drove my scrabble girls to the only one who lives in the next town. I still am the only one  who loves to  drive, so I am the "chauffeur" ! 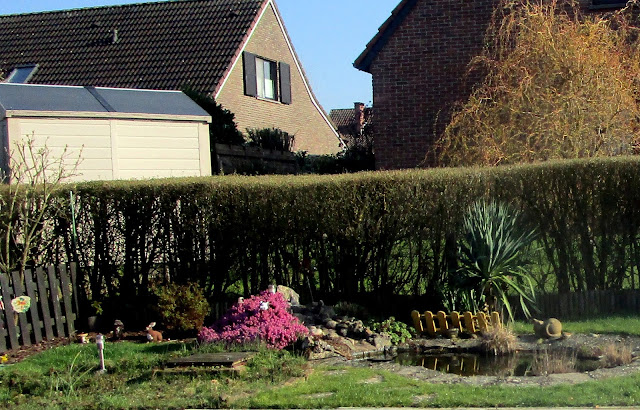 In her garden spring had slowly moved in we could observe all kind of birds drinking out of the little pond.

After our game where we all had almost the same points and two cakes with coffee, I drove them back to  Waterloo. 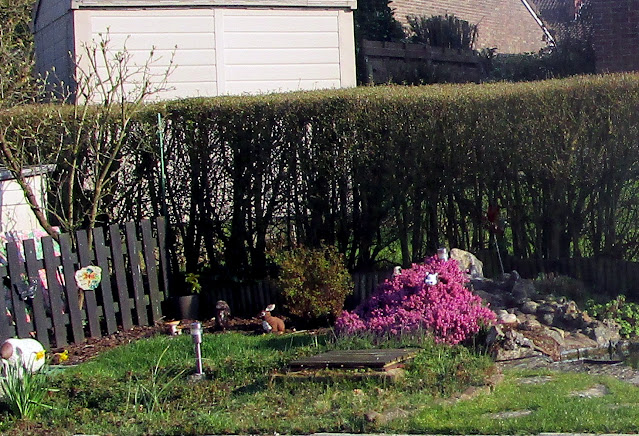 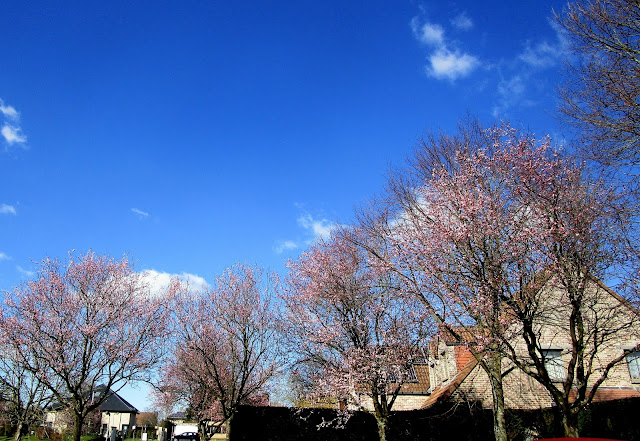 We noticed a that the Japonese Cherry trees had started to bloom. It was sunny bad rather cold 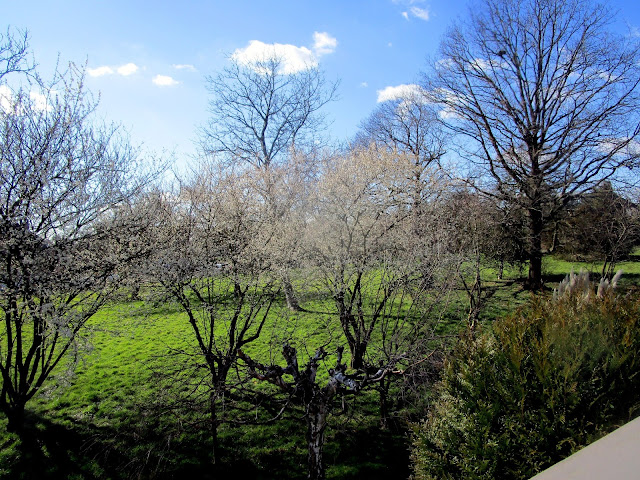 On Wednesday I did some shopping, and also bought 5 T- shirts for Mr. G.which I brought him in the afternoon. No way to visit him I had to give my bag with the laundry to a nurse and got the dirty one back. Amongst the dirty laundry I found some clean once, he hadn't noticed the difference.

I did the laundry and also called him in the evening, but he was angry that he was not allowed to come home. The tests with all the machines have not yet been done. Sometimes he is a bit confused and then normal again !

Myriam came and we watched a few movies about the Acrylic painting in modern Art. It was funny what the painters used ! Nail brushes, spatulas, clothes pin, squeegee for windows, etc. Everything except a brush !

Today I finally could talk to the doctor who takes care of Mr.G and she told me that he is a special case (that I knew) they did a lot of memory tests with him and apparently he answered well to things which normally people don't know and those which everyone knows he didn't know !

Our governement has again restricted our lockdown, now the hairdressers are again closed and all "non essential shops" ! Of course it's never their fault, that they hadn't ordered enough vaccins ! I decided not to watch the news anymore !

Fortunately when I go out and see that spring really tries to move in, I feel a little better ! 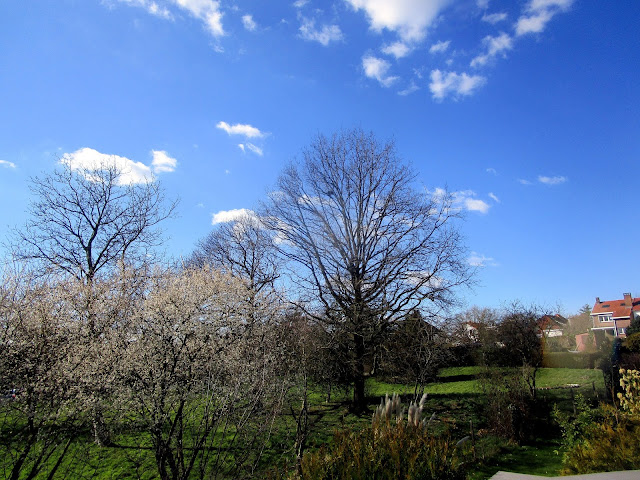 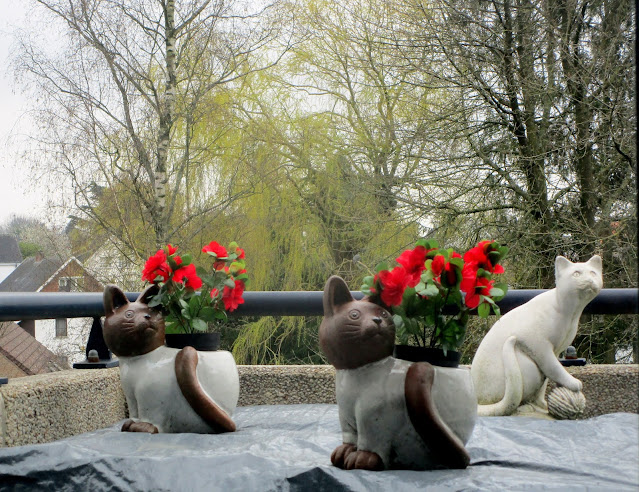 and I "planted" fake flowers in my cat pots, it looks really nice. The furniture is not yet put up it's still a little to cold.

I don't know if you have seen the eruption of a volcano in Iceland with a meter long unspeakable name but as you can see I was there ! 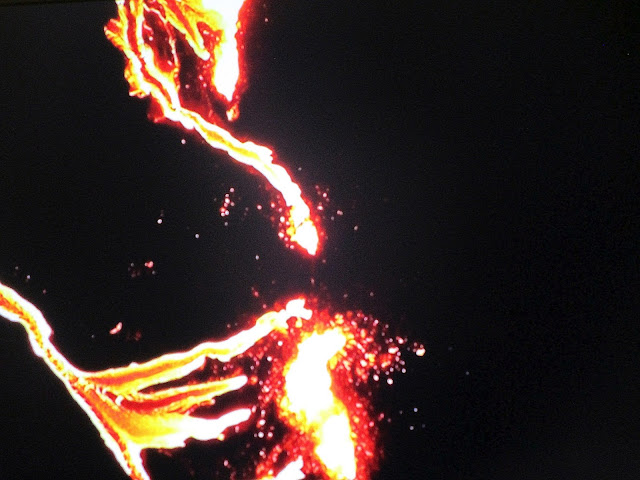 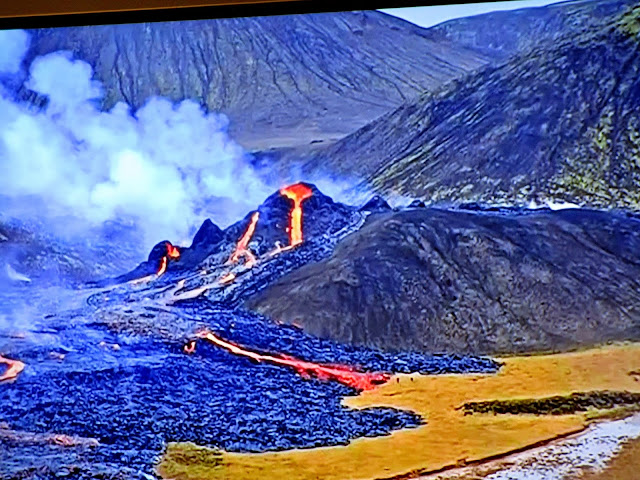 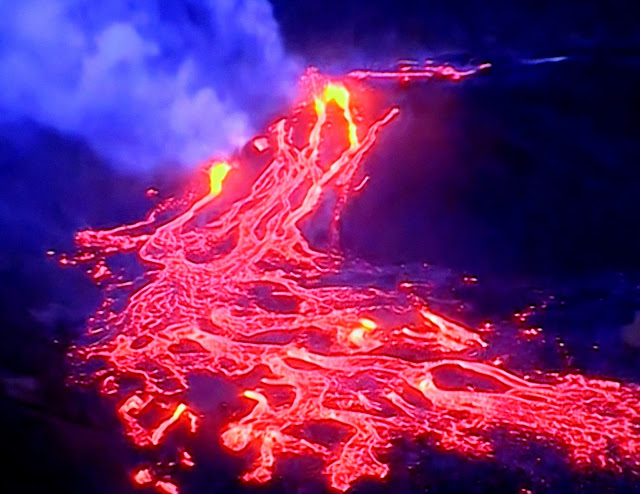 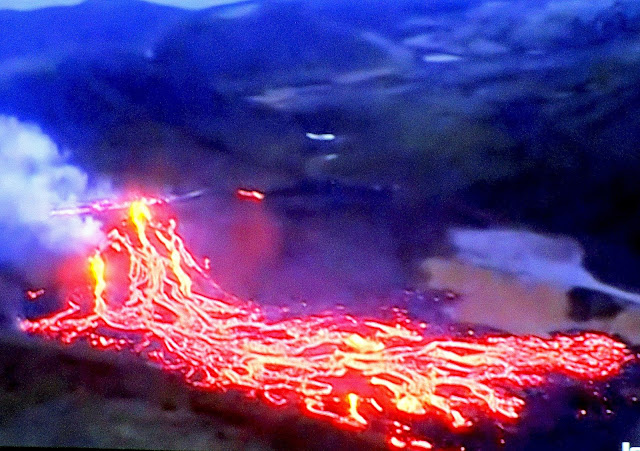 In  my dreams and sitting on the sofa taking pictures of the TV screen !!

More participants here at
Skywatch Friday
Posted by Gattina at 07:00

Beautiful photos. I hope with Mr. G in hospital that you are able to get a bit of rest. It is time for the trees around the world to bloom, at least where we have change of seasons. It always lifts my spirits as warmer weather is around the corner. Have a great weekend.

It's so nice to see signs of spring and new life. Funny how modern art uses everything but a brush. I had seen somewhere a live feed of the volcano, but it wasn't doing much at the time I looked. I hope the doctors can figure out what to do for Mr. G. soon.

I've occasionally been looking at livestreams of the volcano. It's strangely beautiful.

The volcano is impressive but I'd only want to see it from a distance too. It's all very stressful for you at the moment with Mr G in hospital and the Covid situation. Good that you have your friends to make things a little easier.

For TV screen shots, those are quite good. Beautiful cherry tree blossoms!

I had heard about the volcano erupting in Iceland but hadn't seen pictures of it. Wow!
Spring is such a happy time! The birds love it as much as we do.
Hoping you have sunshine and warm weather!

Sounds like an interesting art show. Hope you get some results quickly about Mr G, it must be worrying times for you both. The blossom is so pretty.

Those volcano erupting pictures are really something else! Wow.

Love your cat planters and those bright flowers do look like cheery. Cherry tree blossoms are so beautiful. It must be frustrating for both you and Mr. G.