On Monday I had to drive Mr. G. to his Whist, it's not anymore in the Tennis Club which is closed due to the lockdown, but they play at 4 together and meet at one of their friends who has a very spacious living room. Unfortunately it is only once a week, because Mr. G. starts to suffer lockdown symptoms and has to go now to a kinesitherapeut to learn walking again and strengthens his muscles. That happens to stubborn people who don't listen to their doctors !

I dropped him off and went shopping ! That's a real show ! From far I saw already people lined up with masks on their faces waiting for a caddie. Only one person is allowed to shop and no couples !

Anyway that doesn't bother me I prefer to shop alone anyway. Then I had to desinfect my hands and got an desinfected  caddie. I pushed the thing around and got my stuff and then I had to line up at the cashier. On the floor were yellow stripes where each person had to stand ! I wanted to put my purchases on the carpet as soon as there was space, but I was told that I had to wait until the person in front of me had finished and paid!

It will soon take a whole day to buy a button because the procedure is the same! I was exhausted when I got home! Usually Mr. G. does the shopping! He doesn't even think about it and buys what's on the shopping list. I spent the rest of the day on the computer and on TV, as always.

Fortunately the next day we played Scrabble ! It was the first time since the lockdown end October !! We just had decided that it was enough, anyway we all have spacious living rooms and don't sit one on the other and then we were only 5 and washed our hands before we started to celebrate "La chandeleur" which I didn't know before moving to Belgium. On the second of February is this celebration and the use is to make or buy pancakes !  In fact it is a pancake day. Everybody makes pancakes or tries to do so and it can happen that when you turn them over they glue on the ceiling. 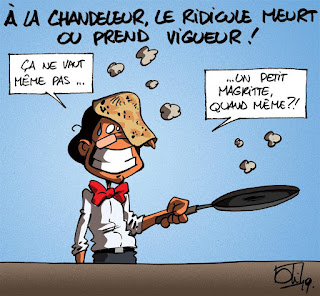 We ate 14 (!) with jam, honey or only brown sugar. Usually you drink cider with the pancakes, but we had coffee. It was such a nice afternoon, that we nearly forgot the lockdown !

Nothing special happened the other days, only this morning, Mr. G. had decided to walk now every day. Of course instead of walking a little distance for a start, he thought he was Superman and walked to the next store which is at least 3 or 4 km far. When he returned, he suddenly had to stop and couldn't walk anymore. I didn't know all that, I was busy when the door bell rang and two young man stood there holding Mr. G under the arms .. and put him in the living room in the armchair.

Besides his legs he was in a good mood and proud that he had made such a long  walk. Both men told him to start slowly and each day a little more (that's what I had said a thousand times). The one was working on the opposite side of our street and had seen him struggeling, and the other one was a young man who just came out from the doctor who lives in the next building !

I thanked them and we chatted a bit and then they went away. I thought that not all people are bad, there are probably more which are good !

more participants at Susanne at Living to tell the Story.
Posted by Gattina at 08:00

Our religious day to eat pancakes is Shrove Tuesday, this year the 16th of February. I wonder if that is similar to La chandeleur?

Thankfully there was someone to help him. Hopefully he won't walk as far the next time.

That's so great that Mr. G. had two good helpers when he needed them. A national pancake day sounds like a good thing!

I agree with you, I think people are generally good. I can't remember the last time I played Scrabble. It's one of my favorite games.

When I come to shopping I have my pace I like to go at.
Coffee is on and stay safe

Good of them to help him along.

Oh my. I'm glad those young men were there and able to help Mr. G!
Scrabble time is always happy time.
Your lockdown procedures and shopping rules are so much harder than ours. It would be hard to be so isolated. Let's hope things are better soon.

Shopping here is almost normal and no masks needed. It is now allowed to have 30 people in your house so now I need new friends to make up 30 people.
Mr G. was lucky to find such helpful young men, hope he won't need them again.

Hopefully your hubby has learned his lesson and will now take things a bit more slowly. Good that he is getting out for some exercise though.

Yes shopping has become interesting here too. Thank God there was someone who noticed Mr G and was willing to give him a hand. The pancake day sounds fun. We have something similar here called Shrove Tuesday and it was to use up all those pantry items before the Lent season. My mom used to make the best pancakes with peaches and whipped cream on top! Nice that you can meet with a few friends. We can only meet friends if it's outside and no more than 10 people socially distanced.