Monday was the perfect day to stay inside, it was cold and it rained ! From our Scrabble group we were only three, three others had a cold. With three it's not so interesting to play then with 5 or 6, so we had quickly finished and started a long lasting coffee break. As it was my turn to receive the girls, I had bought a Christmas pudding, a Christmas log and cookies and the fudge they love so much.

Nobody had ever eaten a Christmas pudding and never had tried the log. The pudding didn't have a big success (which was very much appreciated by Mr. G. who ate the rests which was nearly the whole pudding). The log and the cookies disappeared slowly slowly over the afternoon.

Kadhija who is of Moroccan origin told us family stories and we had a lot to laugh. From an uncle who worked like a horse to spoil his women who of course didn't do anything and had servants for everything. The first one couldn't get children so she suggested him to take a second wife, which was legal but only if the first wife agreed, and in this case had insisted to choose the second wife herself, which she did. The poor man got an ugly wife but she had three children. The third one was a nice girl chosen by both and they were all very good friends went out bought what they wanted could drive around, while the husband worked and earned the money. We ended up to pity the poor husband.  Of course this is use in upper class and not with farmers, where the wives have to work and the husband handles the paperwork. It was very interesting to  hear how other cultures live and are happy.

Tuesday we had an appointment for the yearly check up of our Toyota  Yaris. Meanwhile we went to the hairdresser, which is located in the Carrefour building and is for men and women. We both had shorter hairs and in the cold weather freezing heads, we had - 1°C. Mr. G. went playing Whist and I returned home and prepared my backpack and clothes for our excursion to the Christmas Market in Düsseldorf.

Next morning I got up at 6 am which was far too early but Mr. G. who couldn't sleep anymore got up too and was in my way. Finally I made it to the bus stop where the Bus stopped for our trip to Düsseldorf. There were three other stops to take people in and then off we went to Düsseldorf. I had been often there because Mr. G. had worked for two years for his company in Düsseldorf and I often visited him over the weekend. But that was a long time ago and besides my beloved Rhine and some famous buildings I didn't recognize anything. The Christmas market was huge all over the old city. 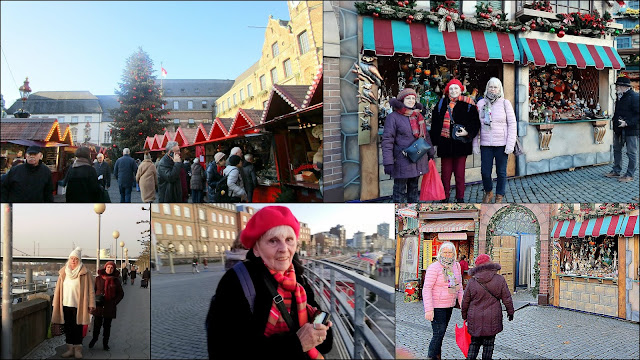 There were many Christmas chalets selling all kind of Christmas ornaments and Christmas stuff, but not what I was looking for the Germany Christmas cakes and cookies. It was too early apparently, for already celebrating Christmas. There was no music either but the lights the trees and all Christmas ornaments were there. We had the famous "Glühwein" hot red wine with spices, and as they wanted to eat German specialities I told them what to eat and they choose the potato pancakes and roasted mushrooms, which we ate at tables on the street. We were dressed like Eskimos so it was not cold, the sun was shining as if payed for ! 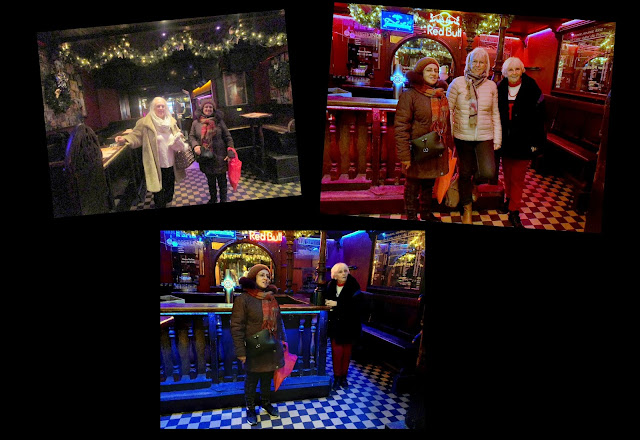 Refreshed we continued our visit and after having done some shopping, special bread, special cakes, and roasted almonds, we ended up in a vintage lady cafe, where we had a strawberry cake and coffee. Then it was time to go back to our bus and in 3 hours we were back in Waterloo.

Was a real nice day !

In my painting class I saw the result of the two paintings I had done last week and again it was a big surprise how they had changed. 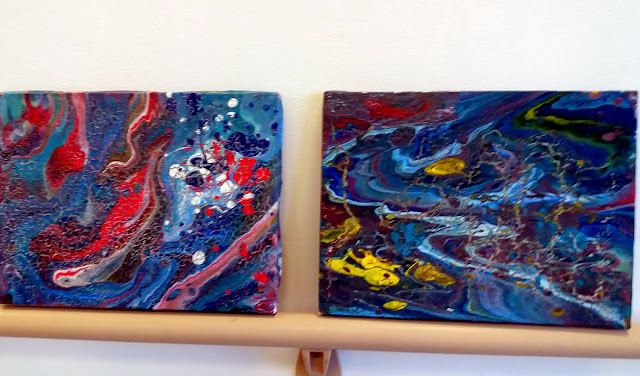 I finished three small once, forgot to take a picture to see the before and after and this time we were  nearly all there only two missing because of a cold.

After class we had lunch in our newly discovered Lebanese restaurant and had a wonderful lunch and as I had written about them in Facebook he thanked me by offering to all of us a special Lebanese tea and Lebanese cake Nicole who was very tired from the works she had had done in her flat, had a Glass of wine and became very funny and we laughed our heads off. The young Lebanese men were enchanted that this group of six vintage ladies were behaving worse then teenagers.

Sounds like a terrific day out!
I envy you for living in Europe. You can get on a bus or a train and see the wonders of culture and human genius. I have to take a plane every time i wish to get there. Expensive and time consumming!

The Christmas market sounded fun. I couldn't go with my friends to a Christmas market this year. They went to Winchester for a couple of days. Sadly I was at the funeral of a very close aunt in North Wales.

A very entertaining day out but I think a long day if it was three hours in the bus each way.

Oh fun...I wish we could have seen a German Christmas Market (ha, pretty hard to do in June). I like the vintage lady fun at the restaurant (and actually I *can* do that, ))).