THE STORY OF A KEY

Besides the fact that I misplace keys often and loose a lot of time because I have to search where they could be, another story suddenly came into my mind concerning a key

I was probably 5 or 6 years old and lived with my parents in a little town near Frankfurt together with my father's mother, my grandma, the grandpa, his sister with husband and my two cousins, and an uncle who had just came home from a war prisoner camp in Siberia where he had been a prisoner from 15 years old til 25 exactly 10 years. They all lived with my grandparents because they had all  lost their homes due to the heavy bombing of Frankfurt. I didn't know  that my parents had lived in Frankfurt in an apartment which was completely bombed out and had disappeared when my father came home from work. My mother was with me, a baby, on the countryside staying with her parents.

My aunt and uncle had the same destiny, their home was also completely destroyed and they also had lost everything. Fortunately the house was very spacious but apparently all the adults living together was not so ideal. We children didn't realise, my cousins were one year younger then me and the other a year older we avoided as much as we could the adults, because there were often fights.

My aunt was a very kind person (to me) but apparently a devil to the adults, she got hysterical attacks, screamed, slammed doors, ran away, came back etc. I personally didn't care, my mother tried to protect me by hiding these facts as much as possible, but that wasn't easy living all so close together. Anyway I didn't understand why my aunt behaved that strange and wasn't afraid either, I think it seemed normal to me.

One day she really got completely crazy, screamed and ran around and then into the kitchen slammed the door behind her and locked the door with the key opened the window and threw out the key. After a while we heard her hammering at the door because she wanted to get out, and called my uncle who tried to calm her down. We children watched from far wondering what would happen now and how she would get out.

My grandma saw us standing there and send us in the garden to look for the key. We did this with great pleasure and were looking for the key everywhere. It reminded us a bit like looking for Easter eggs. We were very eager to find the key so that my aunt could get out because she was still hammering at the door. My father shouted that she should jump out of the window, which was not possible because it was far too high, but he was so furious.

We checked every centimetre of the front yard and finally my little cousin found the key under a fir close to the trunk. She picked it up and showed it proudly to everybody. My uncle grabbed it out of her little hands, stormed into the house and opened the kitchen door. My aunt fell sobbing in his arms and the rest I don't remember.

Only years later I understood how terrible it must have been for them to all live together after the trauma of the war. They had lost everything, just like my parents not even a plate or a fork was left. My aunt suffered from  terrible panic attacks,  because she had been standing in the street where a few meters farer a bomb went down. For days she couldn't hear anything.

When I remember this time fortunately not too much, I get an oppresssed feeling. As a child I felt that there was something wrong without knowing what it was. It was a life full of fear for the adults, the daily fight for food, the American occupation, the fear that they would break into the house when completely drunken and looking for girls.

This key under the fir, in the little hand of my cousin I will certainly never forget. 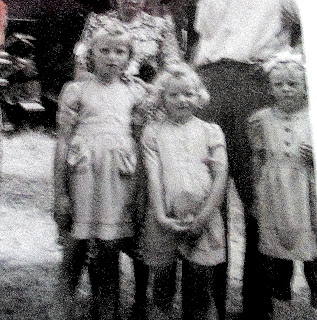 My two cousins and I (right)


Linking to Linda G. Hills SOCS-key
Posted by Gattina at 21:35

The three little girls in the picture look very sweet!
Yes, the trauma of war doesn't go away with it; it stays with us long after the war has ended.

It is good to hear a personal account. Children are very resilient but still such situations do affect them. Clearly your aunt was traumatised by her situation and what she had been through. Some people cope well with disasters and some don't.

The trauma would do that.

What a sad and tragic story and your poor uncle sent to Siberia as a prisoner at only 15 for 10 years. Lucky you had your cousins to play with.

Hi this is such an interesting story, I was born after the war but my elder brothers and sisters have memories of the war. I just goes to show how the innocent on both sides suffered. Your family suffered but I am glad that you as children found a way of coping. Your poor uncle 10yrs in Siberia and so young. The photo is lovely. Thank you for sharing your story. 💜

What a lovely photo. War is cruel and would be unnecessary if we all used our heads a little bit better and don't get taken in by the empty words of politicians.

Wow what a heart wrenching story. The horrors of war are still present in the children of the participants. I can't understand why the rest of the world can't learn from our mistakes and realise war doesn't win anything only pain and bad memories.

Whenever you tell us a war (or postwar) story, I am grateful. We were alive at the same time, but how different it was. .... I love reading these stories...thank you for writing them for us. It is easy to understand your Aunt... and also your mother for wanting to protect you. I had a grandmother who suffered from “nervous breakdowns”. Our parents kept the worst from us. ( we would call it manic-depression or a chemical imbalance now I think.).