THE RIGHT SENSE OF ORIENTATION

Where normal people have a sense of orientation, I must have something else, it's like the countries where the cars drive on the right side and others where they drive on the left.

I often  do the opposite of what I should do, but really not on purpose, it just happens. So it can happen that I might have the best intentions but am completely wrong.

Everybody says that I am a good driver the only fault I have is that I mix up right with left and the other way around. Even my 9 year old grandson when he sits besides me does not only tell me "turn right" but also points his finger in this direction, because he knows his grandma's difficulties in turning into the right direction.

The best and most sophisticated GPS (satnav or whatever it is called) always tells me the right direction but if I don't look on the screen I would not turn left when she says left, but right and when she says turn right you can count on me that I turn left.

This has brought me some unwanted adventures, which in the very moment I didn't appreciate, but which today make me laugh.

Once I was invited by a friend, she gave me the address, I put it in my GPS and started to drive. I followed the instructions but didn't look on the screen. It was a strange area, certainly not one where people lived, but where they usually are buried after their death. I had taken the wrong direction on a very long street which led from Waterloo to Brussels over 15 km and I had landed in front of a graveyard and not in front of my friend's house. Later I heard that this cemetery is very famous, because all the VIPs of Belgium where buried there, and beautiful statues decorated the graves. Through the grids I saw some, and it was confirmed that I wasn't in the yard of my friend. I called her that I would be late because I had landed at the Ixelles cemetery and she must have shaken her head because she said how the heck did you arrive there ? I don't know.

I never drive without my GPS even when I know the road by heart, because with my steady mixing up of left and right I once landed in the middle of two fields on a small cobbled farm lane, and the cows who were happy about this unexpected company all came to my car and looked through the windows. There was a fence on both sides so there couldn't get into my car, but I tell you a cow head is real big when it looks at you through the window.

Another time I wanted to go home, took the wrong direction and almost landed at the sea, which is 150 km from Brussels. Fortunately I realized that I was on the wrong line when I read the city names.

I could go on for hours, with all the adventures I had, but I think each time it happened I wrote it down in this blog. 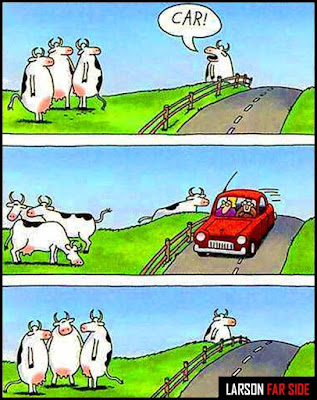 Linkingt to Linda G. Hills SOCS-ght
Posted by Gattina at 07:00