This time my weekend was rather boring, In fact I did nothing the whole day besides surfing (not on a lake) but on my computer to look for two new sofas. That took me quite some time, there is so much choice. Finally I found a model which I like with 3 seats, in an online shop, but I am a bit hesitating to order without seeing it "life". The description is very clear and as it is leather it couldn't be too wrong anyway for our comfort they look perfect. 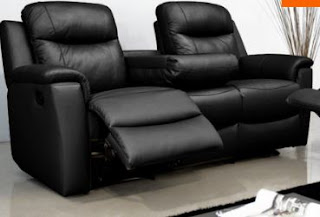 The seatback in the middle can be used as a table

As the sun was shining and there are a few furniture stores nearby I went there, but of course they had nothing similar or it was the double of the price. But it gave me an idea about the color, because initially I didn't want black, but beige and white look so boring in leather. I think I will choose black or dark brown and put some colorful cushions on it. I have to buy two as we have now. Mr. G. doesn't care about furniture, he is happy that he doesn't have to come with me. I showed him the picture and he found it very nice, but I am sure if I would have showed him a pink sofa with golden seams, he would have said the same.

In the evening we had our Theatre play organized for the seniors of the city for a special price, the play was very funny and had a lot of success. It made fun of politics, corruption, going in and out of the European Union (Brexit), in short hilarious.

After that we went to the Carrefour Lunch Garden and had a drink there. It had been renovated and looks not like a canteen anymore, but like a pleasant restaurant, with nice little corners for 4 people. The food was good and we enjoyed the evening very much.

Sunday I woke up and it rained ! The first time since ages, I don't even remember. I intended to go to the big Brussels' market, but when I saw the rain, I didn't want to walk around and get wet, I can go next week.After lunch I watched a crime story, where a lawyer had murdered his wife. It was quite thrilling until the end I didn't know that it was him.

Then I worked, I gathered all information I could find about St. Petersburg, where I had been during my Northern country tour, but of course had forgotten a lot. Next time I won't listen the guide at all, and take more photos, because what he says you can look up afterwards on Internet what he had probably done too. Fortunately I always listen only with half an ear, because I want to take pictures. I am sure I won't come back here again, but how many inhabitants has the city Madame Wikipedia can tell me. Finally after having found who was sitting on a horse statue, I finished and was happy that at least St. Petersburg city had been done.

I also put an advertising on Facebook to get rid of my two old sofas !
Posted by Gattina at 07:00