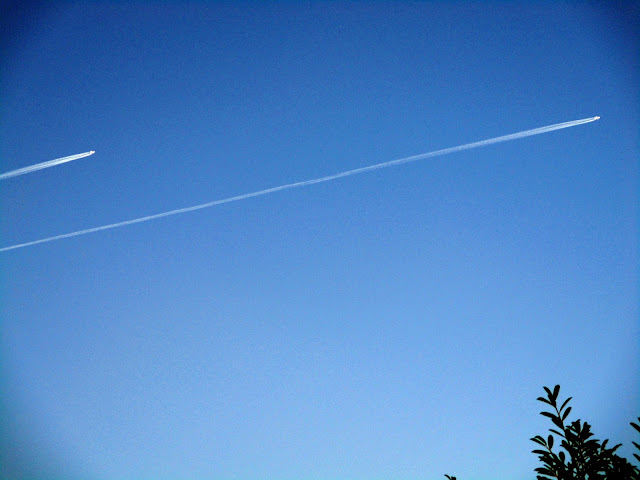 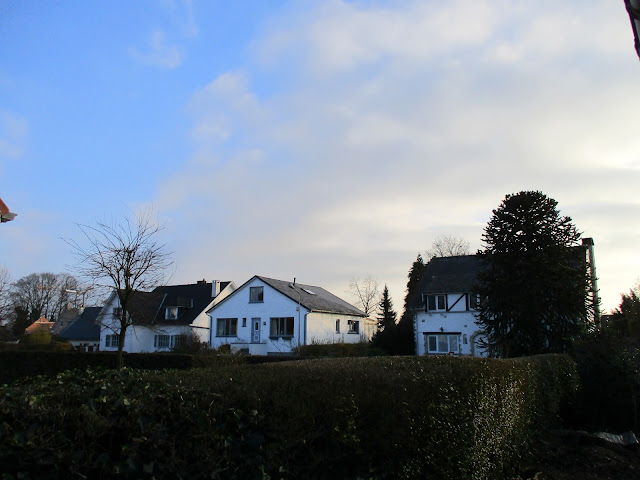 One day sunshine ! Our street


1. I am glad that this long and humid January is over ! But not for our weather because it continues. The worst is that the temperatures are too high for the season and flowers come out and the fruit trees start too. If we now get frost it will damage the trees ! As usual we had our scrabble and I made real progresses I had never had such a high score, but still I was the last one but only for two points.

2. One day we had blue sky and people couldn't believe it, finally a bit of light, that's when I took the pictures above. But there was something in the air which made it hard for me to breath so I stayed inside and looked over the sunny gardens.

3. I had been lucky I had finally decided to go to my respiratory physician and got an appointment immediately because somebody couldn't come. Normally you have to wait at least a month but here I got an appointment for the next day. The result was not very good I only have 40 % of breathing capacity even when I do only a little physical effort. So she prescribed me a medication which I have to take for 2 weeks and then it should be better. It's due to the humidity. She told me that she is overloaded with work and the hospital is almost full. Now I will wait and see. I feel already better because now I know that it is not too bad !

4. Our friend which I always call my adoptive son (because he is only 3 years older than ours) came visiting us. He always says he will only stay for a short while this time it was from 10.30 to 4 pm. He had so many things to tell and empty his heart. He will come back on Saturday and install the big TV we have in the guest room in our living room and the smaller one will go in the guest room. There is also an external lamp to install with a movement detector. He is always so helpful.

5. The Belgian Television came to film our connection to internet, telephone and Television still laying on the street. It goes from the electricity box in front of our neighbors house, along the side walk over the street on our little wall into the garden and then through the cat flap in our garage were the connection is. 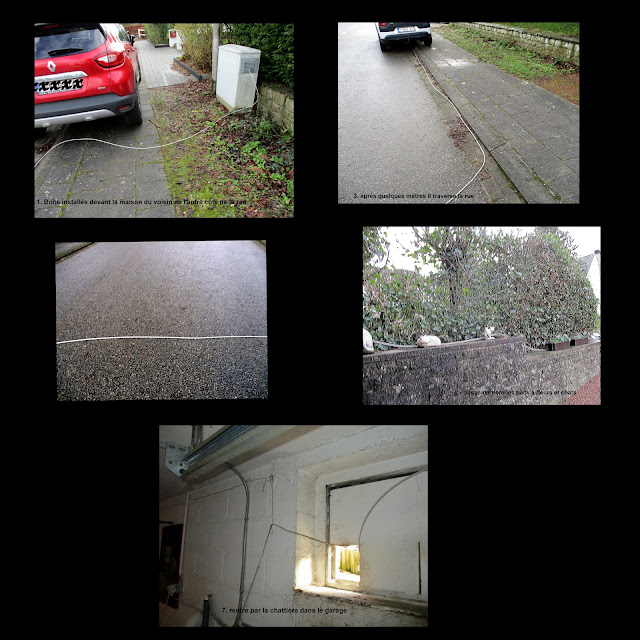 That's how we are connected to the outside world ! 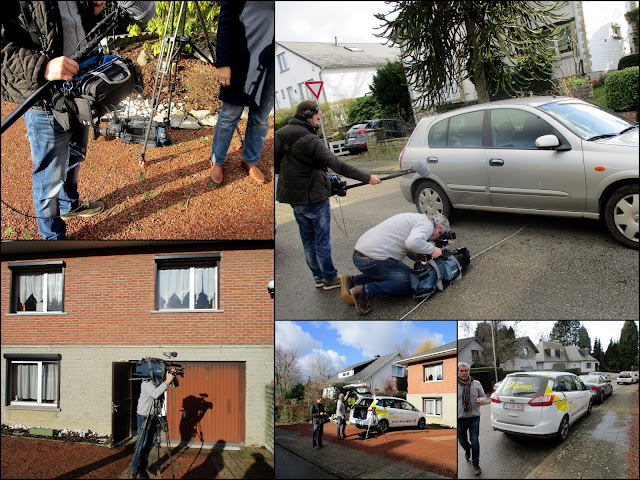 The TV team had contacted me  because I had put the above pictures on Facebook. A journalist asked me if I would agree that they filmed the whole "installation". Of course I agreed. The sun was kind and came out when I had to stand at the box explain the whole adventure then walk along the cable then they filmed me when I showed them the big hole we had had to dig in the garden because they were mistaken in the measurements. Then inside our garage I had to show the cat flap and the connection. Unfortunately no cat came to assist me for once I was a TV "star" !! It was quite funny and the team was very kind. With the journalist was the cameraman, and one for the sound. I hope I spoke clear and fluently although I still had the impression that one could hear my breathing. But never mind in this bad weather you are allowed to catch a cold. They will communicate the date when I appear on TV it's a program for consumer rights.

We have had a lot of rain lately, but yesterday, today and the weekend are good. Sunny and cold so no chance of spring flowers coming up already!

People in Australia are without internet, for various reasons. While I am not trying to minimise your experience, you do at least have internet, as quirky as it is.

I could never live where it's humid in winter! We get some hot humid days in July and early August but it usually only lasts a week or couple days thank God!!

Good luck with the new installations!

Oh MY. That's so exciting. You are a TV star!

It is sunny, but very cold. The last two nights we have had snow. I am so ready for Springtime.

Well I hope the medication helps. And have they fixed the internet yet? Nice to be a celebrity if only for a short time but not because of such a crazy installation! I'm glad you got photos of the blue sky so you can remind yourself it does exist when all is grey.

Sorry to hear you've been unwell. I hope the medication does its job. Shall we see you on television in UK? I think not - what a shame.

What fun, a TV star, hopefully someone ill now sort out your connection properly.

Wishing you the best with that breathing problem. And, happy you got right in to see the doctor. That's so seldom the case.

Pretty skies! Hope you get connected to the Internet properly!

What an adventure you have had in trying to stay connected to the outside world!! Beautiful opening shot of the contrails.

That sounds scary to only have 40% breathing capacity! Glad there some medicine to help. I am glad you have such a good relationship with your "adoptive son" and he's able to help you out with some things at home. I hope the TV spot gets you some results for your internet installation. I'm sure you did great as the star!

I have to say I haven't seen a connection like that before!!I'm glad it's getting attention! Your sky photos are so bright and clear, so lovely.

Wow! That installation being delayed was so weird. Glad they fixed it all, and let you film it! So sorry you have been sick. So much illness right now! Hope you are feeling better soon! I have to say, your sweet friend installing TVs etc for you is a gem!!!

I hope you can share the segment when you appear on TV! Too bad your kitties missed an opportunity to be on TV, though :-)

I hope your breathing is better. We finally had some rain - for one day. But it's better than nothing, I suppose. It seems that in these past years it rains and rains in some countries and others get nothing. Weird weather everywhere.

I'm sorry you're having trouble breathing and hope the humidity gets better soon.... yikes! I'm quite excited to say I know a Belgian TV Star now ;>)!!! But seriously I hope that the program jars somebody up there enough that you get it fixed. Putting those pictures up was a good use of Facebook.

I am still amazed at the installation that was done---cars drive over it! I hope your segment on tv gets you the attention you need to have it fixed.

Hurray for the sunny day!

I hope the medication is helping you with your breathing. Be well.

What a shame that it finally got sunny and you had to spend it indoors. Maybe now that you have "star" power that internet cable will be installed properly! Hope your breathing is better soon!

Nice contrail shot, still snowing off and on here. Thanks for sharing :)