1. As usual the week started with our Scrabble group. 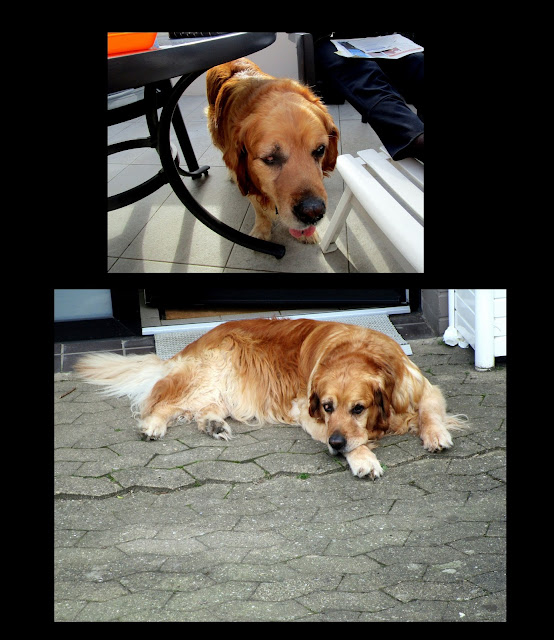 But in the morning Nicole had been with Charlie to the vet because of his infected eye and unfortunately he was diagnosed with a tumour behind his right eye. There is nothing to do than to make him his life as happy as possible until he starts to suffer. For the moment he is a little slow, probably due to the pills he has to take but he has a very good appetite and that's important.

2. These bad news influenced our scrabble game, we tried to play as usual and that worked, but we were a bit less cheerful. 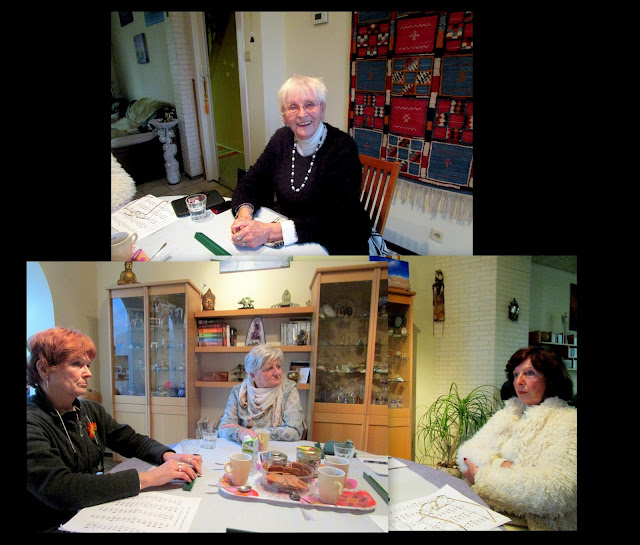 This time Mireille won, and Ilona lost, I was the third one, not too bad. We were at Ilona's and just had our coffee break. Main discussion subject, Charlie's tumor.

2. The world is small ! I had got a phone call from a lady who asked me if I was Mrs. G. I said yes, and she told me that she is also living in Waterloo and had stumbled over this blog and had tried to find out who I was !  Through Facebook she found me and the telephone n° was in the telephone book ! So we decided to meet in a café in the center of Waterloo. She also lives here and not that far from me ! We had a very nice talk and a coffee together. We were about the same age and after 2 hours she and I had to go, but we will see each other again.

3. I had some shopping to do and met with Nicole afterwards to have a drink together. Charlie had changed a bit he seemed older to me and quickly breathless. But he greeted me cheerfully and looked at me with his one eye, the other is now completely white. He lay besides our table and I ordered some water for him, and apparently he was happy because he likes to go into a "bar" !

4. Exactly one year ago on the 22nd of March the terrorist attacks had happened where 32 people died and hundreds were injured. 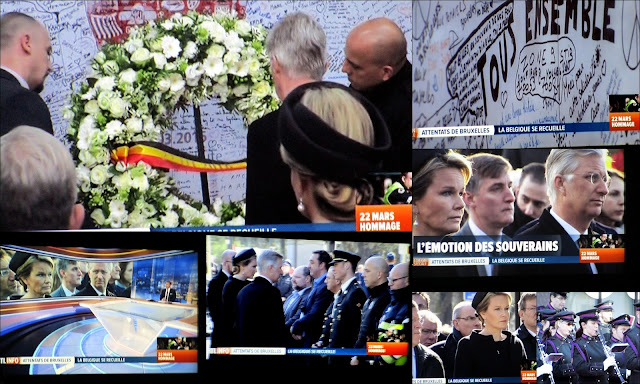 A ceremony was held in presence of the King and the Queen, at the Airport and then at the tube station. I watched a bit on TV but it was so sad that I didn't watch the whole ceremony. 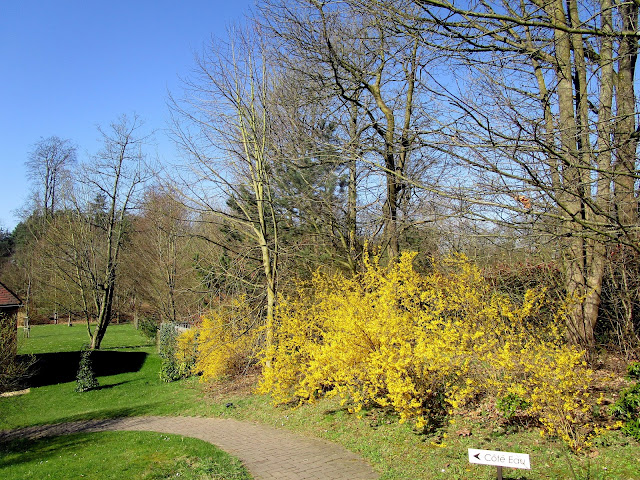 Instead I noticed that nature starts to bloom ! 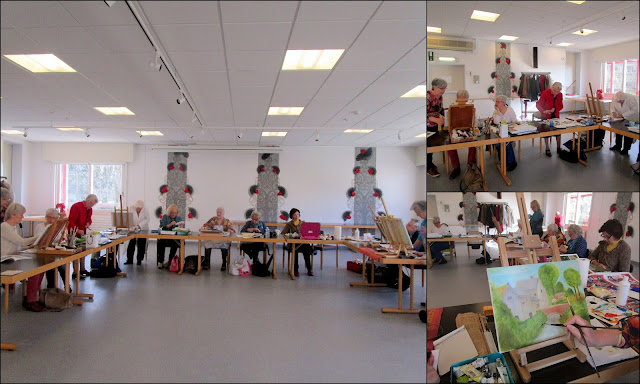 There were quite a lot of us who were missing, doctor's appointments and colds. So we finished or started new paintings and had a lot of fun !

Hi Gattina - oh dear I am sorry to read about Charlie - you're doing the best for him. All the best - and yes Spring is coming .. cheers Hilary

Sad about Charlie but what a nice story about meeting with someone and you being Mrs G. I am not sure because of the time difference, but did the attack in London happen on the 22nd, one year after yours? No media has mentioned this.

Thanks for sharing your Five on Friday. A sad sort of week. Sorry to hear about Charlie. Hopefully he will have a happy remainder of his life and not too much pain.

Sad news about the dog. Nice to meet a new friend. I'm visiting from Five on Friday.

Lovely to read Charlie enjoyed water at the bar. I hope he will spend lot of happy time.
How nice you made a new friend! The world is small indeed :-)

Poor Charlie! I know how upsetting that is. I am glad there was a ceremony for the fallen in the terrorist attack. Glad you met a blogger friend...I bet that brightened your week! Hope it gets better...

I'm so sorry about your dog. And all the sadness surrounding your post. Your photos are lovely though.

Poor Charlie. I hope his remaining time is peaceful and enjoyable. I'm glad you had a good time with the lady who found you from your blog! That's indeed a sad anniversary. Things are blooming here, too - so nice to see.

So hard when our furbabies aren't doing well. I pray that he will not suffer and that he will be a happy boy for as long as he possibly can. Seeing the beauty around us is very necessary when the world can seem rather bleak. Take care.

so very sorry to hear about yourmfriends dog.

glad you got to meet a new blogging friend! how fun!!

how great that you found a new real life friend through blogland :)

Sad to hear about Charlie. It's always hard dealing with sick pets and knowing how and when to make difficult decisions. I'm glad you're getting out and about, I hope it means you're finally over the bronchitis. Nice to meet a new friend. And yes finally it feels like Spring might be here to stay :)

I'm sorry to hear this news about Charlie as I know he is a very special dog to you all. I know you and Nicole will do the best for him.
It's fun to meet fellow bloggers in real life--that sounds like a fun coffee date.

I hope Charlie learns to live well ... and live long ... with his one functioning eye. Noticing the coming of Spring somehow seems like a better way to honor last year's terrible events than watching the whole sad program about it. It feels like telling the terrorists that they can't ruin our world.

so sorry about your dog