We had the first Facebook meeting this year of our group "Vivre à Waterloo" (living in Waterloo). Usually we are meeting once a month and from time to time also for a supper with music ! This time it was in a rather new restaurant with the funny name "The Jollywood" ! 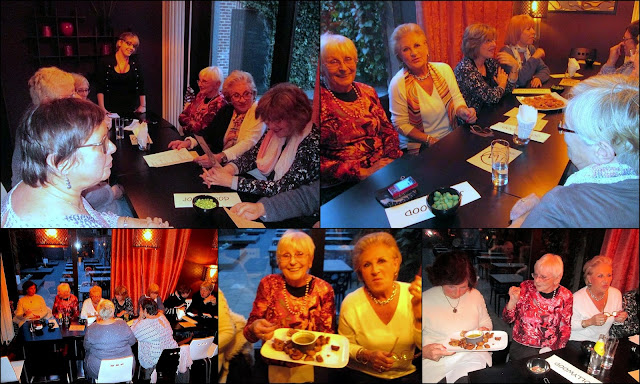 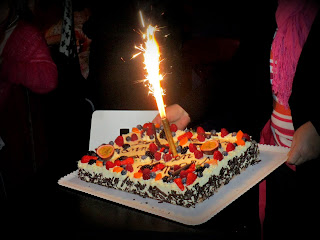 One member of the group had baked a cake for 40 persons ! It was delicious. We all had a drink, the restaurant offered us little starters, some had supper and all ate the cake of course. Nothing was left.

Nicole and I left around 9 pm, with most of the others. We really had a great evening. It's so nice to see the people life from whom normally you only know a picture and the name.  This is a good side of Facebook !

The spring weather has disappeared as usual for the weekend and it was cold and wet. When I woke up the house felt cold. I checked the radiators they were all cold. Mr. G. checked the fuses, everything seemed to be OK. I called the emergency service and they came in an hour, there was one piece defective which he replaced, and now it's working again. It's awful being in the cold !

Nicole had called me on Sunday morning, that Charlie wasn't well at all and she was very worried. She has an appointment with the vet on Monday.

I went there after lunch and saw Charlie sleeping in front of the house door. I had taken Mr. G's new car to try it out, so Charlie didn't recognize the noise. But when he saw me stepping out of the car, he gripped a ball and ran over to me and greeted me nearly as usual, maybe a little slower. He even climbed the steps to the second floor which apparently he hadn't done the whole day and had let Nicole serve him food and water downstairs ! Then he led me to his toy basket where I had to choose a ball for him. I was so happy to see him nearly normal. Only the eye looks awful. 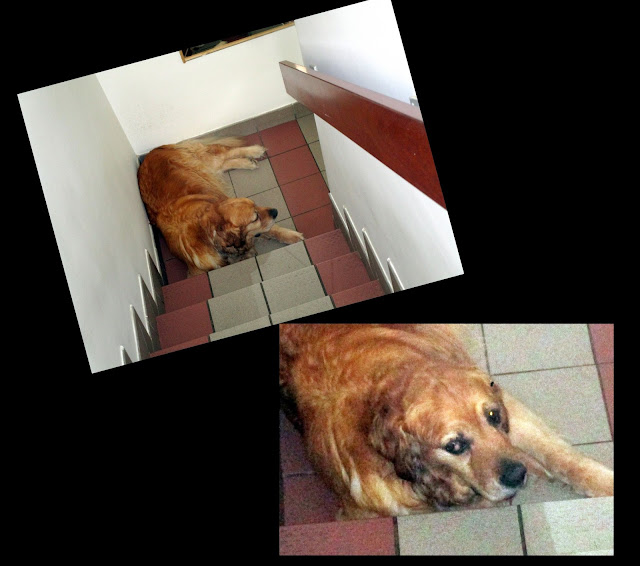 It's red and half covered by a white skin. But at least he eats and drinks and even snores, so there is hope ! Tomorrow we will hear if he has a tumour behind his eye or only an infection !
Posted by Gattina at 07:00

Hi Gattina - glad you had a good time, but am hoping that all will be well with Charlie - it's worrying for Nicole and you all .. cheers Hilary

I hope everything goes fine for Charlie.

You and the person sitting next to you look very glamorous. I am guessing there is some silent dressing competition when the group meets.

Hope all is well with Charlie, he has many fans wishing him a speedy recovery.

Lovely to see photos from your FB meeting. Sounds like you had a great time!
Charlie is so sweet. He got very happy when you came :-) I really hope to read a good report from the vet visit xoxo