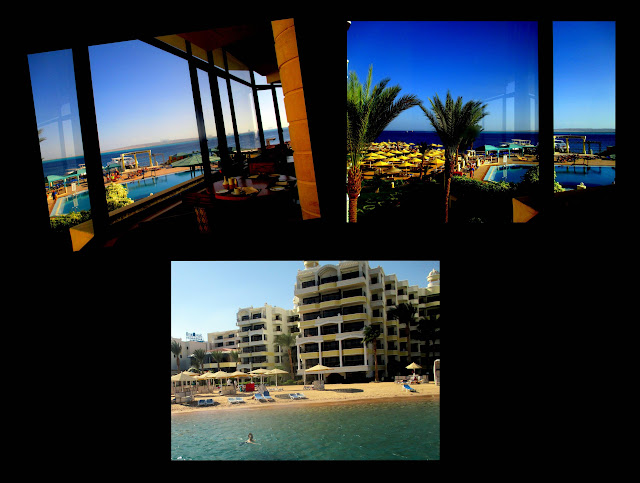 View from the Restaurant and Chantal swimming in the sea

After a very good night sleep we had breakfast and enjoyed our first day at the beach. The sun was shining and it was warm, we really all three purred. Chantal went even swimming, Nicole and I were too lazy and it was also a bit windy. Unfortunately our happiness didn't last long. Before lunch I went into my room to change and my mobile rang. It was Mr. G who told me that Chantal's son had called from Toronto because he couldn't reach his mother on her smart phone. For an unknown reason her mobile didn't work here. He informed me that Chantal's husband had died ! I was like knocked out ! How should and when should I tell her, after or before lunch. I decided after lunch so that the poor girl at least had something in her stomach.

We had lunch together and laughed and I had such a heavy heart !
After lunch I finally pulled myself together and told her what had happened. She wasn't very surprised because he was laying in bed like a living dead, couldn't feel or see or talk. She took care of him for 6 years and it had been hard. So it was rather a relief for everybody. The only thing which was so awful that for once she went on holidays it had happened the second day.

Now she has to fly home tomorrow, her sons arrive from Canada and Dubai. The care taker of her husband had already done the most urgent things so that she hasn't to worry too much. So we spent the day together at the beach trying to relax and forget what had happened.

Nicole and I felt so sorry for her, she never could go on holidays because of her husband, now she had found a retired nurse who stayed with him and she could go away for once, and this must happen. If only it had been before departure or after the two weeks holidays ! She was the one who needed a holiday break the most. 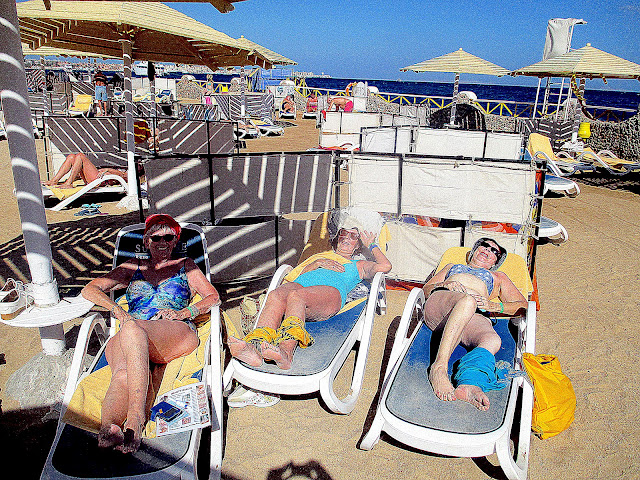 Hi Gattina - oh dear how very sad ... or a relief - but as you say, just desperately unfortunate it happens when she's actually having a break. All the best to you all - Hilary

I love how those shadows leave me not knowing if they are coming or going!

A similar thing happened to me once. I had to tell my friend who was at her son's baseball game and didn't know if I should wait till the game was over. I didn't wait but then we did wait to tell her son till after he played.

Oh that is sad! But I hope you will be able to take your dear friend on another vacation when she has done all that needs to be done. (I don't mean to sound hard=hearted, but Im sure she has already grieved and mourned some time ago -- as soon as she realized her husband would never recover from his illness. What happened was inevitable -- it is just too bad she was on holiday).

(I have caught up on a few of your posts, since we've been busy with thanksgiving and getting back on the road again, heading to Florida I have gotten behind .) I am only leaving one commentr since you are on holiday and I don't want to drown you with comment!!!

So sad for Chantal. I hope you can enjoy the rest of your holiday and plan another holiday with Chantal later.

What a shame that it had to happen just as Chantal was enjoying herself for once. Hopefully she will be able to go with you next time.

That is so sad on a number of levels. You cannot help but feel sad for chantel who now has to leave her first vacation in a long time and go back and deal with the death of her husband. I know you will both support her in the coming months.

Oh that was a difficult thing for you to have to do. I would also have waited like you did. Sad too that Chantal has to leave you.

How very sad and tragic to happen, as you say, when Chantal was at last enjoying a much-needed break. I'm sure you'll support her through this and then plan more holidays when she has got herself back together.

Oh how sad. Even if they had been expecting it, it always comes as a surprise and not a welcome one either!

I hope her trip home was okay.