On Monday morning Mr. G chased me almost out of the house he was so worried that I could miss the plane. We picked up Nicole and Chantal and got into a terrible traffic jam ! It had rained and the whole morning traffic in Belgium had broken down. I don't know how we managed but we arrived just in time.

From there everything went smooth, the disabled service came to pick up Chantal as she has one leg crippled from a Polio she had when she was 3 years old. and we were driven with a little electric car to our gate. That's great service, because Chantal couldn't walk such a long way with her crutches. At the control Chantal was ringing going through the scanning gate ! Her bad  leg is mostly out of metal ! Then her bag was ringing, I looked on the screen and saw something looking like a pistol ! I thought she certainly doesn't carry a water pistol to shoot on us, the guy emptied the whole bag and the pistol was a banana ! We all had to laugh and she even could keep it ! After a nice flight of 4 h we landed in Hourghada. 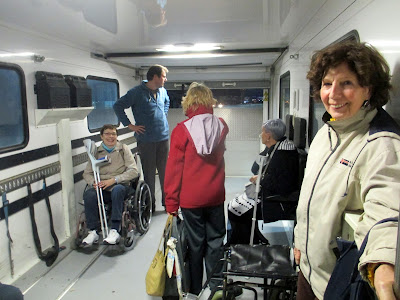 In Egypt we were picked up from the plane by a truck dating from the middle age. We all went in and then were driven to the main building. To unload us there was an elevator at the truck which went down slowly slowly making a noise like a chain saw.

There were many tourists lining up for the visa formalities, but we of course had priority, and were taken through all controls as the first once.

It was already 8 pm when we finally had our rooms and had checked in. The restaurant was empty, there were besides us two other people. We had nearly finished our main course that we were told that the restaurant would close at 9 pm ! We hadn't realized that it was so late, we had forgotten that there is one hour more ! Despite the tourist crisis this hotel is very busy. There are mostly Germans, Brits and Dutchs ! No Russians in view ! Good for us, bad for the Egyptian economy as one waiter told me.

It is very warm but unfortunately very windy too. Hopefully tomorrow it's less windy.

I thought that traffic only got jammed in Malta when it rains. Glad to hear we're not alone.

Wow, I see you are on an adventure. I would like to visit the pyramids some day.

Glad you arrived safely. Hope the wind dies down so you can enjoy those blue skies and warm air.