1. It rained cats and dogs the whole day when we started our sightseeing trip from Bad Breisig where my parents lived after their return to Germany when my father retired.

I showed Ilona the apartment block in Bonn where I lived as a child. It had changed so much that I hardly recognized the area. 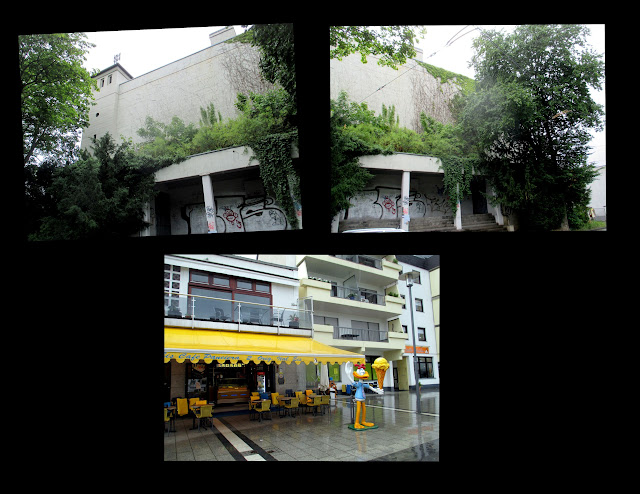 Nearby stands a bunker where in 1950 people lived, as the city was bombed at 80 % and there was an enormous lack on houses. I had to go inside there once when I was about 8 to bring a message to my mother's cleaning lady, and have never forgotten that awful place. So many families lived in there just in one room, and they cooked and there was no aeration and it stank terribly inside.

Today the bunker is still standing impossible to get rid of it, so what did they do to erase bad memories ? The bunker was painted in a light gray and on the top stand two turrets now, trees have been planted and those who don't know what it was could think it was a little fortress. Instead of the empty space around it, little cafés and restaurants had been built and it didn't look at all anymore like the dreadful place I still had kept in my memories. The Bunker is now empty since the last people left end 1950.

2. On our way back we stopped at Remagen. 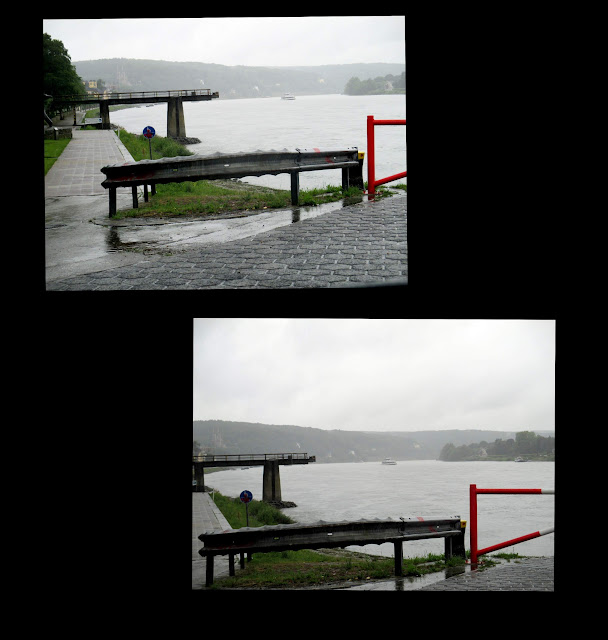 We wanted to see the famous bridge The bridge of Remagen which had also been the title of a movie.
At the end of WW II, in 1945, the troops of the American 1st Army approached Remagen and were surprised to find that a bridge was still standing.  After the U.S. forces captured the bridge, Germany tried to destroy it multiple times until it collapsed on March 17, 1945.  It was never rebuilt. The towers on the west bank were converted into a museum and the towers on the east bank are a performing art space. And from the bridge remains only what you see in the pictures above. 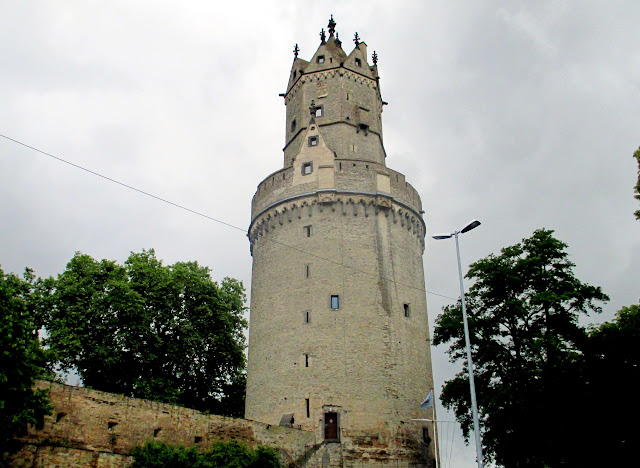 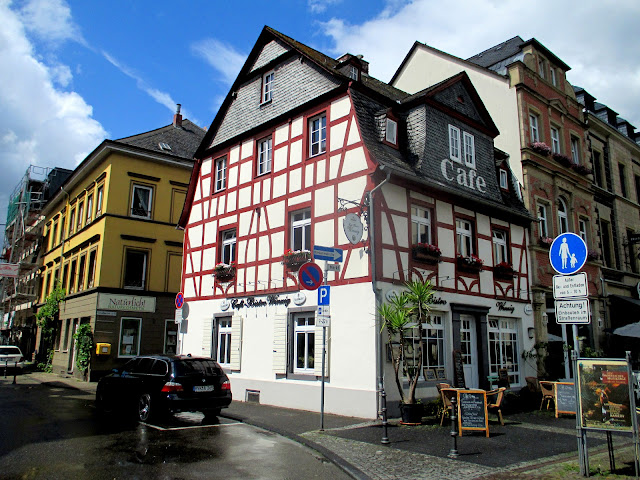 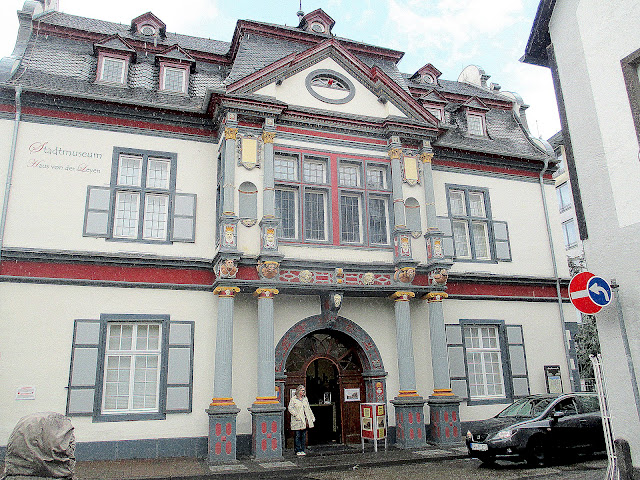 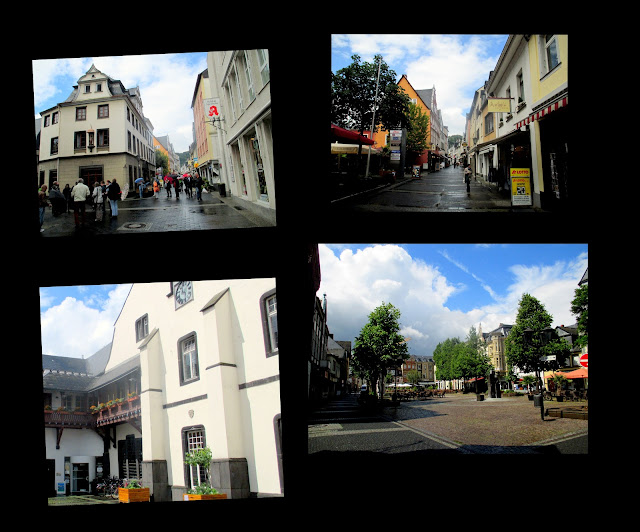 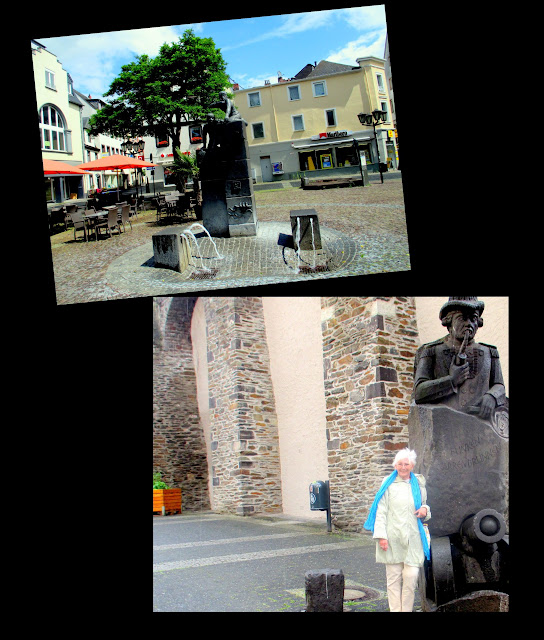 Although the Ahrweiler City Gate and many other historical buildings were partially destroyed in WW II  during the advances of the Allies, the city looks real beautiful ! Many half timbered framed houses are still standing and are in an excellent state. I posed besides a fountain (which I didn't know) because the figure spat only from time to time and by jumping aside, I could just avoid a shower.

4. We wanted to see the Laacher See. 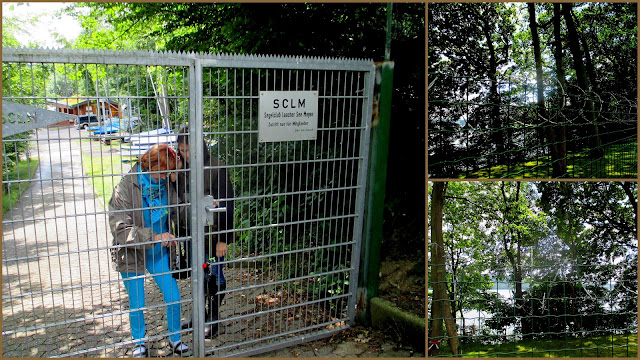 No way to approach it. Ilona helped a young lady to close the gate, and I could take some pictures from far. There was barbed wire all around. 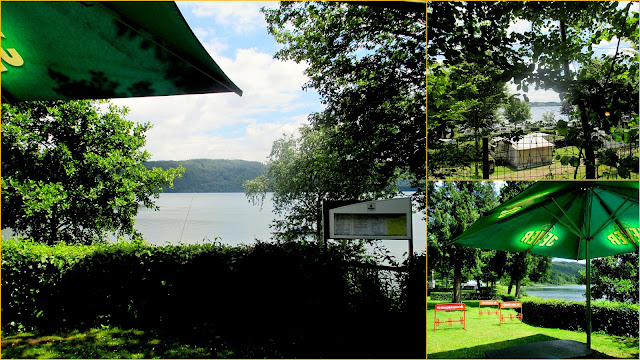 I managed to go inside the camping place, but was quickly stopped by an unfriendly woman so I couldn't go further. 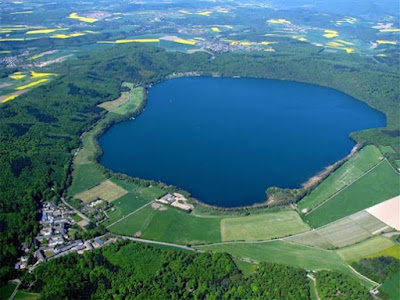 The view of the lake from an airplane.

The Laacher See is a volcanic caldera lake with a diameter of 2 km (1.2 mi), about 24 km (15 mi) northwest of Koblenz and 37 km (23 mi) south of Bonn, and is closest to the town of Andernach situated 8 km (5.0 mi) to the east on the river Rhine. It is in the Eifel mountain range, and is part of the East Eifel volcanic field within the larger Vulkaneifel. The lake was formed by a Plinian eruption approximately 12,900 years ago with a Volcanic Explosivity Index of 6. 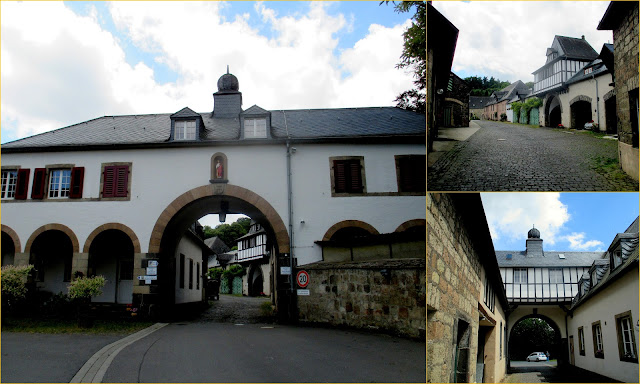 From the convent of Laach of which the abbey structure dates from between 1093 and 1177 I couldn't take a picture, impossible to go in. But at least we could see the farm just besides it.

5. On our way back in the middle of the countryside we suddenly saw this : 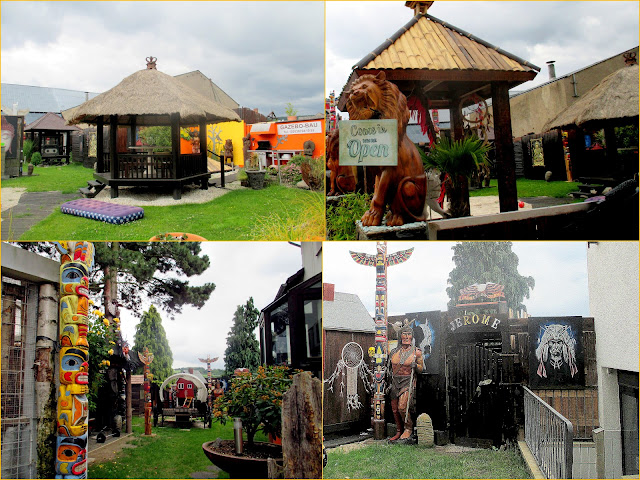 A shop which sold all kind of American Natives stuff. It looked so unrealistic in the middle of all fields.

On our way back to our Bed & Breakfast we stopped at the cemetary to visit my parent's grave. 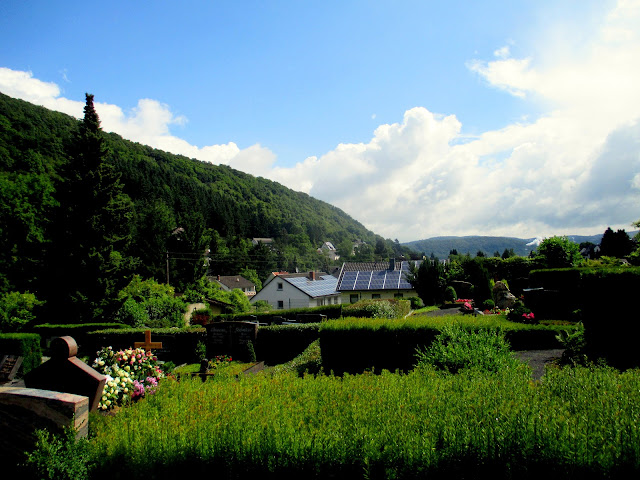 The cimetary is on a hill and the view on the valley is very beautiful.

Bad Breisig where we stayed is full of half timber framed houses. 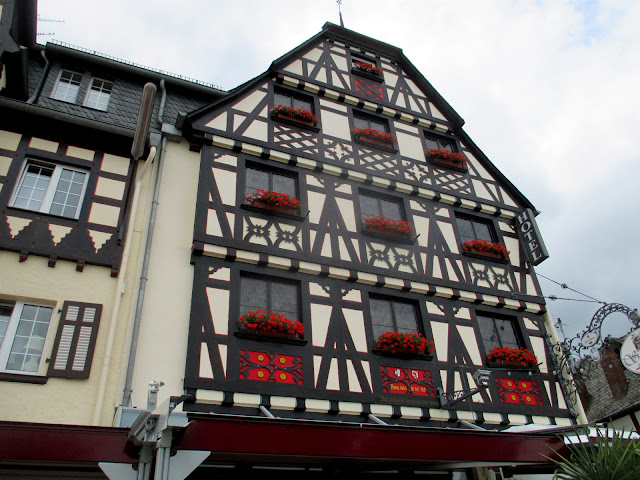 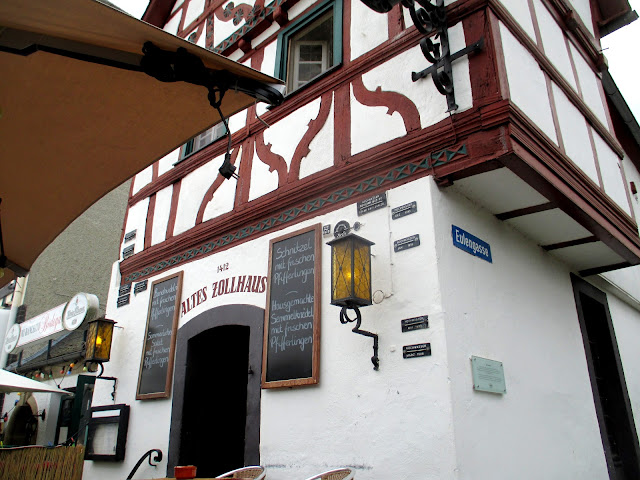 On this one the blue badges on this old toll house shows how far the water arrived when the Rhine floods. I have seen it once until the second badge. 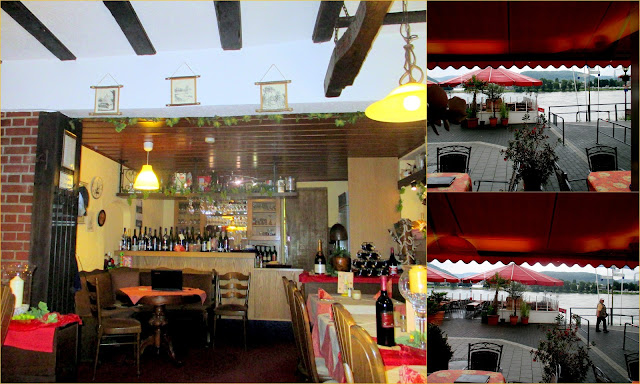 Although the restaurants along the Rhine are flooded quite often, in no time they are functional again. They all were very nice and the food was also very good. Unfortunately we couldn't eat on the terrace, as it rained.

Amazing pictures, and the history!!! I had no idea there were volcanoes there. The American Indian exhibit really looks out of place.
Great pictures!!!

Gattina, thank you SO much for sharing this trip with us and these beautiful pictures. Even more than that thank you for mentioning the way WWII affected the people and the beauty of the cities. War is a destroyer and your pictures make it so evident.

May you have a wonderful weekend!

What an interesting trip you took. It's so sad to see the fallout of war. We seem to have these kinds of reminders everywhere and yet we keep on fighting one another.

Such a nostalgic trip for you! Maybe the bunker isn't a place you'd want to see again even with the addition of turrets and shops, but your parent's grave is lovely.

What an interesting trip! Thank you for the photos and information.

What an interesting post. Despite the weather you seem to be visiting so many places.

Gattina, what an interesting post and sight seeing trip you have given us. It must have been such an emotional trip for you seeing those bunkers and your childhood apartment. What beautiful buildings those half timber framed houses are. Love the flowers in the windows and all the lovely contrasting details!

A very interesting historical post, Gattina, with your family connected to it, too.

'Thats a good' article, i usually amazed with' this thing, i asked myself about this opinion, I wish You'll a better articles that can make another people impressive..don't make the article feel rigit and isn't interesting and poor, i like to read this' article and i think this is "good".thank you' m'y brother.

Thanks for the tour of this area of Germany. I can tell you enjoyed your trip and that it was important to visit those old memories.

You did a lot on your visit. I love those timber framed houses.

we were in Ahrweiler and Remagen two years ago....they are beautiful places isn't it?