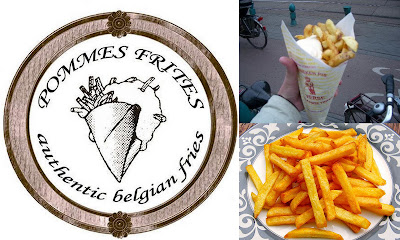 I don't like the word "French Fries" at all, because the French have nothing to do with the invention of the "French Fries" ! They were invented around 1680 in Wallonia, which is the French speaking part in Belgium. The other part spoke Flemish (Dutch).

The poors of Namur, Andenne and Dinant have used potatos when the river Meuse didn't have enough fish anymore. They cut potatoes in the shape of a small fish and fried them so they had the impression to eat fish !

Some people believe that the term "French" was introduced when British and American soldiers arrived in Belgium during World War I and consequently tasted Belgian fries. They supposedly called them "French", as it was the local language and the official language of the Belgian Army at that time, believing themselves to be in France. The term "French fries" was growing popular. But in fact the term was already used in America as early as 1899, in an item in Good Housekeeping which specifically references "Kitchen Economy in France": "The perfection of French fries is due chiefly to the fact that plenty of fat is used"

Being a little point on the map, for the foreign soldiers, Belgium apparently was located in France. Not surprising, lots of people know "Brussels" because of the European Union, but don't know that it is in Belgium.

Interesting post! I had heard somewhere that "French fries" weren't really French, but I don't remember where now. I guess we should call them "Belgium fries" instead!

Belgium fries just doesn't have the same ring, does it? Interesting post!

I did not know that! I don't eat them any more under any name, but sure have consumed plenty of them in my life! When I was a young teenager we would order a large coke and a plate of French fries (well we didn't know any better name). Then we'd use a half a bottle of the free catchup that was sitting on the restaurant table to dip the potatoes in.

Whatever happened to 'chips'? Now we have gone all posh and join the rest of the world and call them French Fries. Or can they still be called chips when served with fish? I like gravy on my Chips!

may be you should advocate for a rename.

Well just give me a potato and I don't care what it's called. This was an interesting post. I do like them cooked this way. LOL.
Thanks for sharing. I posted about Festus, Mo. for letter F.
Have a great weekend.

So that's how French fries got it name. I wonder if they've always tastesd the same.
The View from the Top of the Ladder

Interesting history. It's kind of like Iowa here in the states. Nobody really knows much about it.

I never knew where the words French Fries came from, but now I know. I love sweet potato fries. Have you ever had them?

Call them what you want, they are delicious in any language.

I left a comment for Jenny, but in case she can't fix it I thought I'd try and contact you through last week's post. Your link for the letter "G" takes me to Jenny's blog instead of your blog. I'm going to try and look for your "G" post now.

Yum. French Fries. I think they could be called anything and I would still find them fantastic!

I just saw Betty's comment above mine. It's kind of late to fix it but I'll look at it now!

Thanks for linking to the letter F.